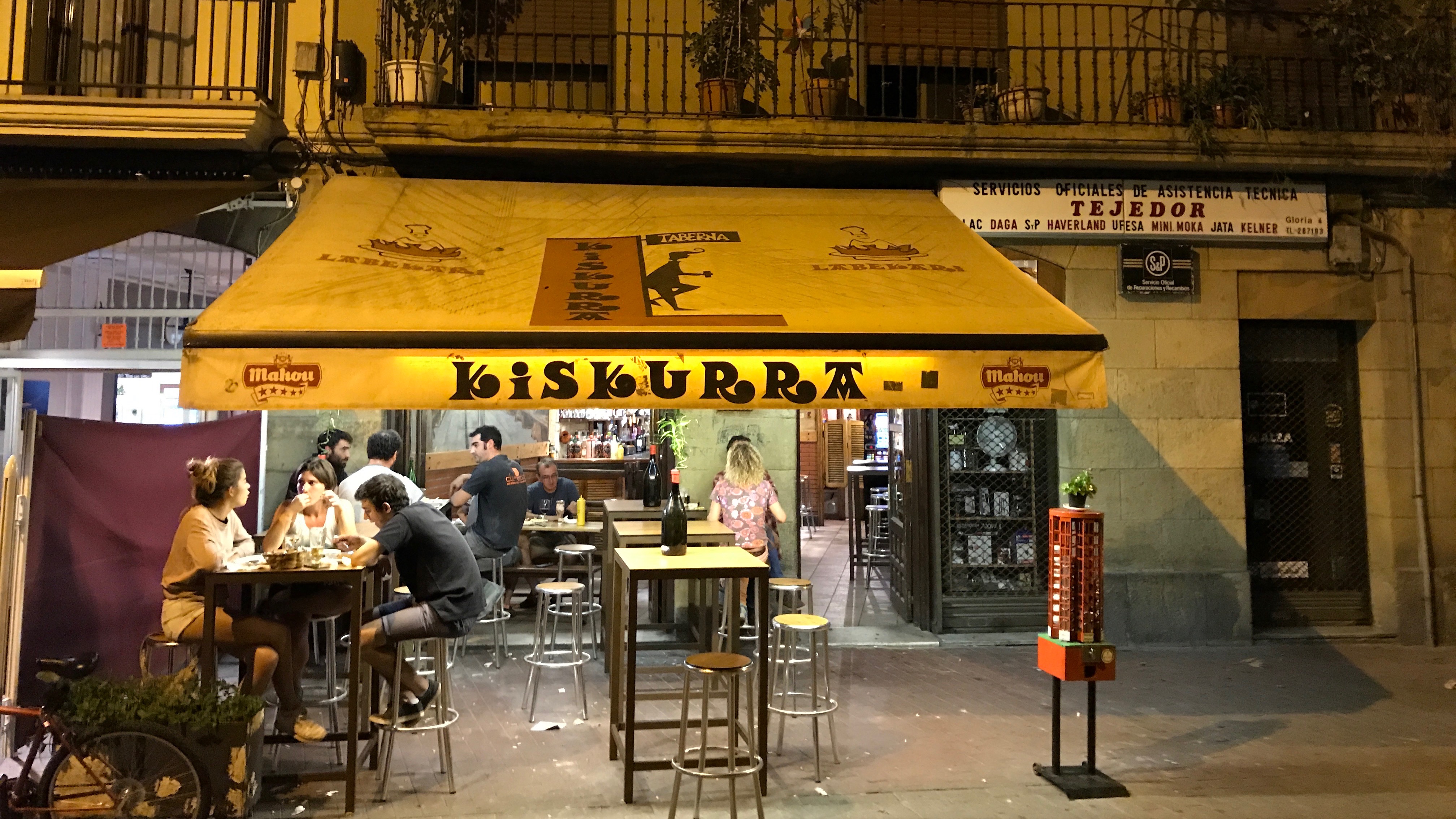 I'm happy. I can now speak of my own regular's haunt in San Sebastián. It is a sweet spot just behind my father in law's apartment in Gros where we always stay when spending time in the city. He is a good guy, the old man. He actually showed me this bar a couple of years ago as he thought it would be a place of my taste. He was right about that.

Squeezed in a small pedestrian alley, this charming yet radical hangout is a paragon of Iberian countercultural legacy and full of the uncompromising free-spiritedness that I love so much about this part of the world. Rooted in a remorseless will to not be subjugated by anyone and driven by a natural state of pushing the boundaries of freedom, Spain can at its proudest moment be a fury of resistance and inviolable integrity. And this bar screams all of that. The curly mullets that never seems to stop growing out of a rebellion towards the mainstream. The Basque flags calling for independence. The sweet smell of Morocco's finest burning outside the entrance. It is all a tribute to a thing called freedom. It is Kixkurra Taberna 1987.

I spend my days in San Sebastián getting invited to family lunches in small almodòvarian kitchens and playing on the beach with my son. The occasional piece of seared foie is also entering my body. So are the many glasses of tinto, dry cider and local txakoli-wine. It is truly a life lived large here in this European mini-Rio de Janeiro. Still this haut-culture that is so deeply associated with this city does not really do it for me. Not this time. Every chance I get I sneak off to Kixkurra. Mostly because I am and have always been a massive stoner but also because I like it here. It is something of a relief. Here the sweaty but still very delicious lasagna placed on the bar counter reminds me more of a baked college dorm than a slick coverage on a food and travel show. I'll have a piece of that one. The tight-nit group of twenty-year old somethings passing around a canuto of the size of a fuet-sausage is also quite refreshing. How beautiful wasn't those hazy days of naivety again? Just to ensure the mixed age range a couple of dirty plumbers are sharing a plate of fried squid next to these youngsters. At this bar not only everybody is welcome, here it seems as if all kinds actually want to attend. It has that mystic feel of community. In this case an obviously liberal community.

And I love all of this. It is obviously a culturally meaningful place for many of its loyal patrons. But what excites me most is probably the fact that we are here dealing with a strikingly strong cultural heritage that many Basque people strongly relates to but also see as natural elements of their contemporary history. I am referring to the phenomenon of Basque Radical Rock. It is a music genre that with its surrounding characteristics and sub-categories traces its origins to the late seventies when the Basque Country was in a big cultural transition. Deeply connected to the political vacuum that was a consequence of general Francisco Franco's death in 1975, the newly gained democratic privileges and a flat-out confrontation with the progressive popular culture from the West gave birth to a new youth movement in Spain. A rather explosive and unforgiving one. Originated from the capital, La Movida Madrileña was an unplanned counterculture which during the early eighties celebrated a hedonistic take on life where a sexual, drug-recreational and exhibitionistic philosophy was significant. This movement of course reached San Sebastián and even though the Basque version of La Movida differed in how it was expressed more in the region's desire and fight for independence, it was still crucial in how a new alternative identity came to light.

It is the legacy of all this that are still to be found around many bars in the Basque Country. I would actually dare to say that bars like Kixkurra are essential in keeping this tradition alive. And the importance of this can't be stressed enough. To fully understand the post-Franco generations, one can actually not discard the movements around Basque Radical Rock. And even though one of the most decadent punk bands to rise here during the eighties heyday - Eskorbuto - once stated that "rock does not have any fatherland" there is no way of denying that the punk scene has find its very home here. In fact, the Basque Country has always been considered as one of the strongest scenes in the diaspora of punk music and by looking at how the counterculture is paving its way today - there is surely a whole lot more punky vibes around some bars in San Sebastián than it is in the current cocktail-sipping East Village.

But the scene is under siege. Without a doubt. Since ETA renounced its armed struggle in 2011, the growth of tourism has accelerated to a state where there today is a lively debate in how to regulate the influx of tourist hordes coming in to San Sebastián. The external craze for Basque gastronomy has all gone through the roof. And as the main narrative of San Sebastián has become first and foremost centred around exclusive baby eels and a world record density of Michelin-stars - the city's alternative take has been marginalised. Such as the former thriving rock- and punk scene. The owner of Kixkurra guided me through the problematics of this development as we got into talks one day at the bar. According to him there were loads of bars like Kixkurra when he opened it back in 1987. This I have also been told by a relative to my fiancée - Sarri. As a son of a fisherman who worked in the harbour that surrounds San Sebastián’s old town La Parte Vieja - he spend a lot of time here during his youth and remembers a city that was very different from now. Then, this historical area was a deeply diverse neighbourhood where progressive places of punk and rock-n-roll could be found next to traditional pintxos-bars, all surrounded by a charming 19th century architecture. Although beautiful to picture, that is not the case today. Now La Parte Vieja is too plagued by pink Polo Sport t-shirts, steep bills and organised tapas-crawls.

As the alternative movement has being squeezed out from the picturesque postcard vision of San Sebastián, it has of course found new areas where it can thrive. The local neighbourhood Egia is evidently the main scene of this exodus. Characterised by a rough and honest city-feel this area has become the main hub for alternative music and for those people who can't afford or for that matter stand the development of inner city San Sebastián. And this is all well; that there is still an urban space left for the countercultural city. It does however not conceal the fact that the city has somewhat forgotten about the people who are from here and who cherished it long before the big wave of gastro-tourism. It is actually a sort of betrayal when put in a critical perspective. The success story of how the world fell in love with the connoisseur-paradise of San Sebastián really carries a dark truth about how something else was made impossible. How something that mattered to a whole lot of people was being eradicated and pushed away. This making it even more relevant to visit and enjoy the bars like Kixkurra. It is in many ways a much more dynamic experience than the crowd-pleasing stereotype but it is also the perfect platform where to get a greater understanding of modern Basque culture.

Drinks? No surprises here. Beer, wine and so on. The gin and tonics are as they should be in Spain quite generous.

Munch? San Sebastián, where even the anarcho-punk movement eats well. Kixkurra's bocata has a cult reputation of its own, attracting people from all over Gros for the crusty sandwiches filled with jamón, meatballs or chicken - of course squeezed in between the breads with an almost suicidal amount of French fries. 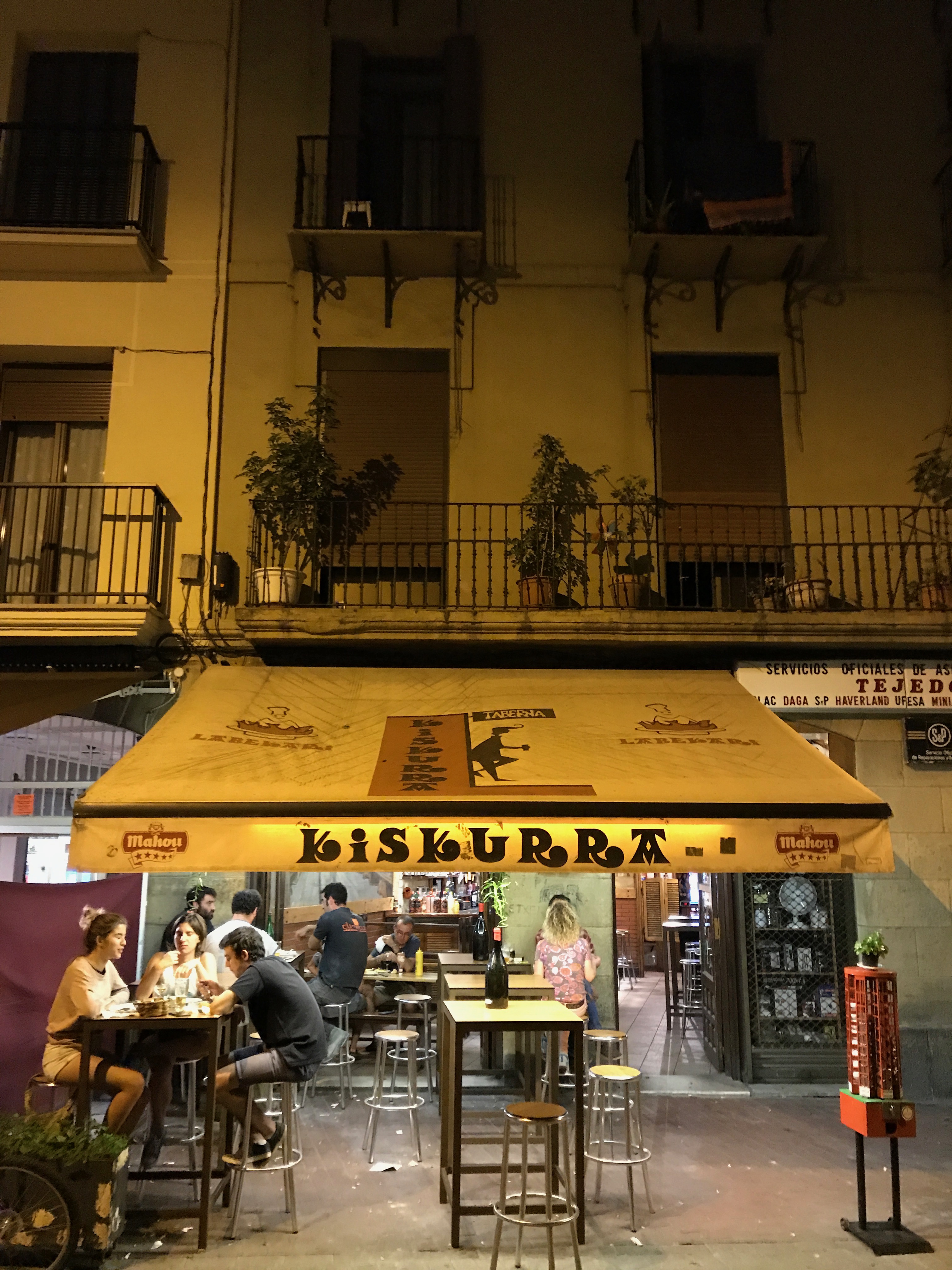 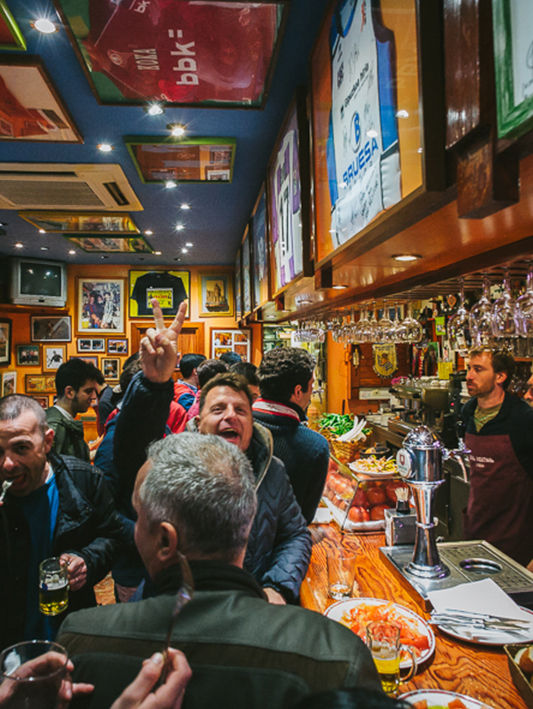