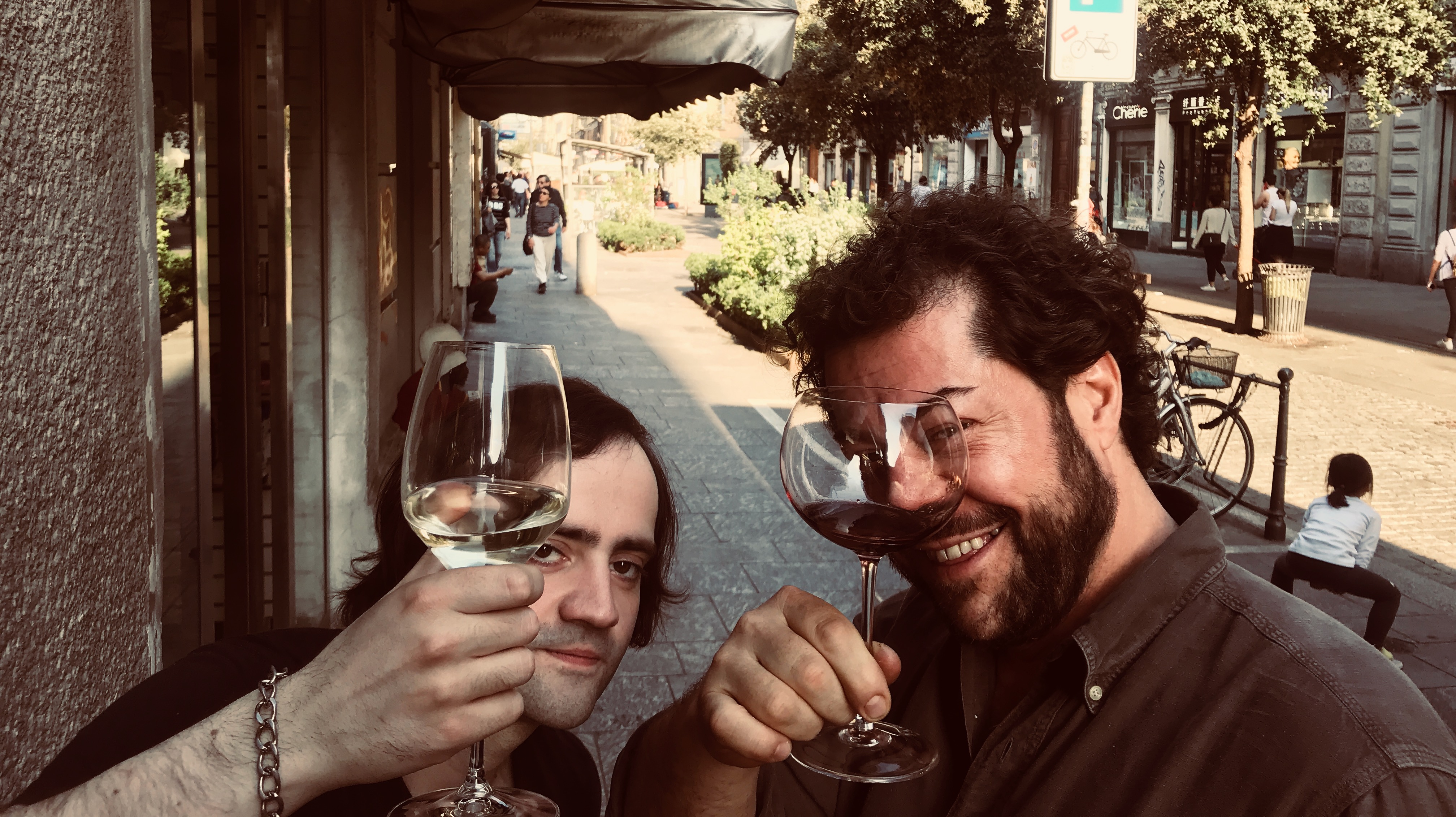 Plot. Since I am a cheap ass lover of cheap ass whiskey and even obtain a membership of the cheap ass tribute WhatsApp-forum that me and some dear cheap ass friends breath life in together for The Dundee Blended Scotch, I grab a bottle of the Dun with a bucket of ice and I take a seat in my garden on a hot Swedish summer night. I open my not so cheap ass Macbook to refresh my mind of the photos of a bar that I took a couple of years ago. I am swiping back and forth until I get stuck on a picture of an odd duo, raising their glasses in front of my photographing telephone. As the cheap ass water of life keeps moistening my lips, sip after sip, I simply cannot move beyond the photo of them two. I wonder; who are they and who have I once been to them? They seem to contain a motley partnership indeed; one with a brutish appearance with the bad promises of trouble, a bit like a dreadful Sergio Leone antagonist. The other with something of a pale and spineless expression that still proposes something of a devious mastermind; one part cunning, one part wicked and a last part sharp-witted as well. Together they could make a rather dynamic couple of villainous crooks. Here comes brain and muscle, you better watch out. Or just two contradicting personalities with no connection between each other at all. How could I know? I can’t even remember why I do not remember anything of them at all. All I know is that the wine was flowing that afternoon in May.

‍Trivia. In 2011, Swiss filmmakers Patricia Boillat and Elena Gugliuzza made a rather watchable documentary called Isola, Where Bacchus' Language is Spoken. Besides being an insightful study of how elegant (old Guiseppes with high cholesterol, patiently waiting for their first heart attack to arrive while wearing genteel autumn corduroy designs) and awkward (thirty-one year old Italian mama’s boys still living at home, listening to old Manu Chao records, occasionally out on town when spending their weekly allowance on fun while demeaning themselves in grungy leather jackets big enough to smuggle an entire parmesan wheel) Italian men’s fashion can be a the same time, this movie portrays not only the curious microcosmos of a beloved regulars’ bar but also a neighbourhood and the rapid changes it goes through. The blocks around Via Paolo Sarpi where Cantine Isola resides make up Italy’s oldest and biggest Chinatown and ever since textile workers from the Chinese province Zhejiang started inhabit these streets in the late 1920s, it has been an important hub for Chinese business in Europe and today it boasts a population of 21,000 Chinese immigrants.

‍Superlatives. In a city otherwise known for garish roof top bars aimed for the brainless crowd (Bar Basso, you are still our hero in the dark), this is the kind of place that will make you feel at home while still far away from such a place. It is friendly, warm and honest to both its customers and to itself. A rather phenomenal wine selection it boasts as well where - hold your Italocentric breath - even classics from Bordeaux, Mosel and Rioja have been encouraged to pop up in your glass. And they will not necessarily blow the bank, just your mind. Just like the remarkable collection of poetry scribblings that are hanging on every square inch that isn't packed by wine bottles or thirsty regulars. And personally, I am quite fond of the freebee snacks of fresh onions soaked in olive oil on small pieces of bread. How modestly confident is not this statement of food? It is raw, simple and openminded. Just like Cantine Isola in general. As one is pondering about the world with a glass of red philosophy in the hand this becomes so clear. It really does not need to be more difficult than this. Good wine, burping breaths of onion and a steady stream of people enjoying the same space. They get tossed together by the magnificent owner Luca Sarais who orchestrates the social activity in these premises as a conductor does his ensemble. It is probably him I owe my thirty minute friendship with Brain & Muscle and although this is all I know about that, I am still grateful about that. That’s that. 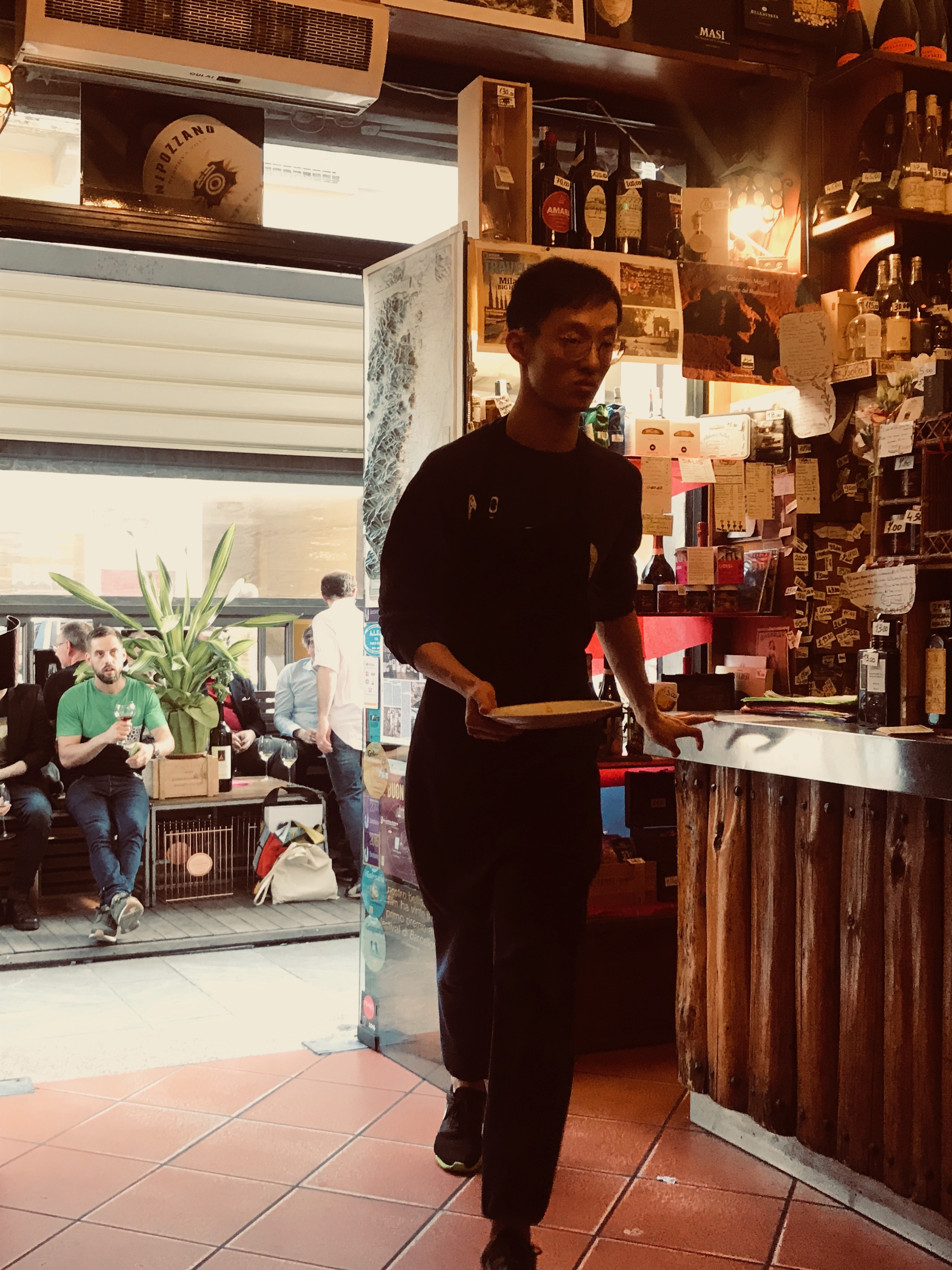