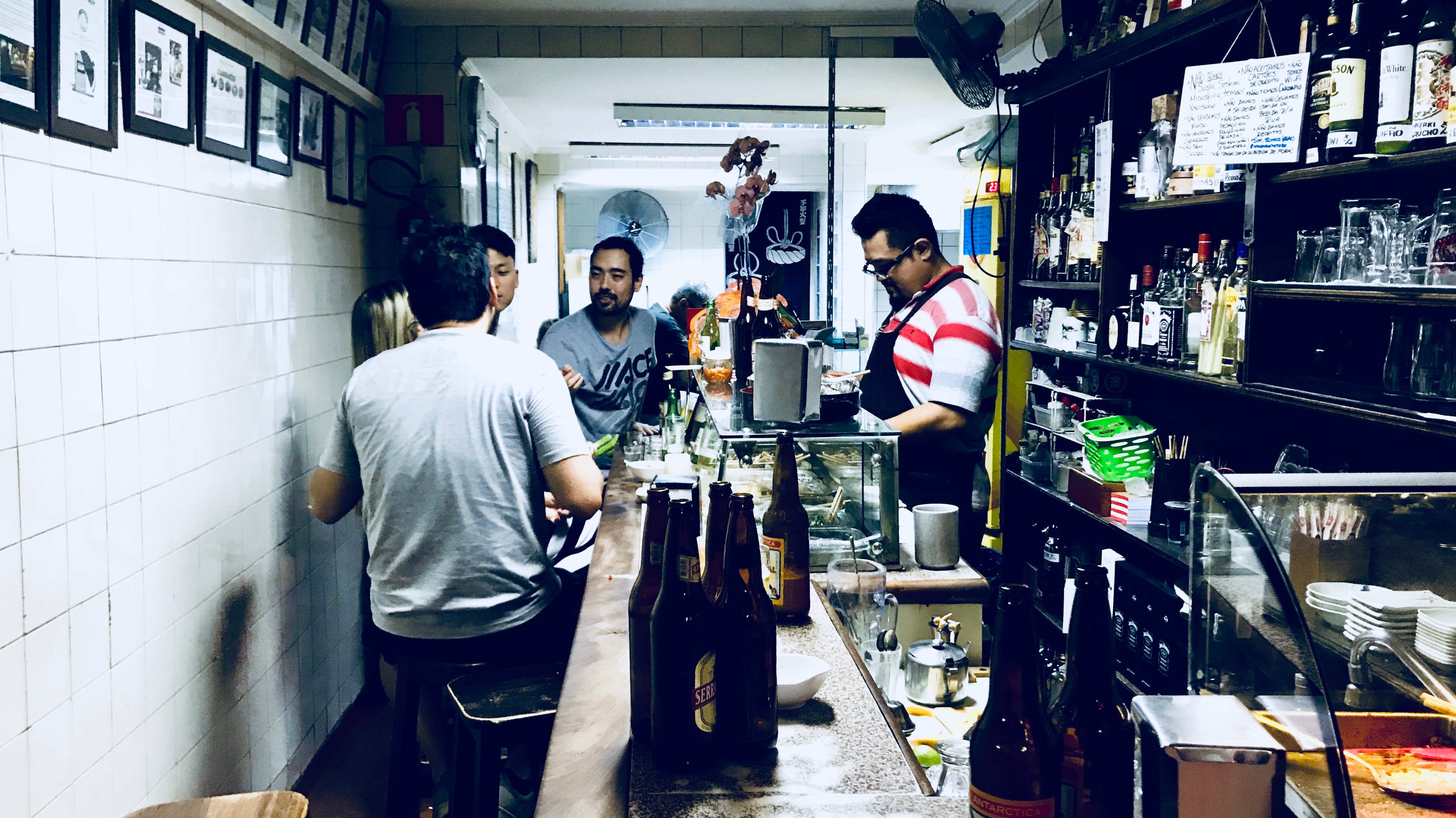 In the old French colony Pondicherry one can dine on holy slabs of roast beef and slurp onion soup as if Napoleon’s dreams of conquering India wasn't buried with him on Saint Helena. After dinner, it is only to whistle for a rickshaw and stop for a cup of roadside chai before heading home to the cute boutique hotel that is romantically situated in an old colonial residence.

Meanwhile in New Jersey, it’s Super Bowl night and a guy called Dom pops a Miller with his take-away Veal Parm. He is a Jets fan and neither will this year bring him any reason to celebrate, a weary load he shares with his distanced “soccer”-frenzied family back in the old country who’s local team Palermo will never win the league. But sports is nothing that concerns Carlos Almeida, a young car mechanic from Hamburg who lives only for the weekend and the rave. As he stumbles home from Rote Flora in the early Sunday mist he makes sure to grab some pastries at his uncle’s pastelaria in the Portuguese quarter around Ditmar-Koel-Straße. They are the perfect remedy after a rough night of decadent Hamburg dissipation and so they have been since the first Portuguese working immigrants moved in to this neighbourhood five decades ago.

Follow the pattern. Armenian kebab in downtown L.A. A cheesemaking Swiss colony in Uruguay. Indians in Mombasa celebrating Diwali and Russians pouring vodka on the boardwalk of Brighton Beach. It is a hybrid world we are living in, a complex cobweb of diasporic interchange. And like a fresh bundle of cilantro it divides the world with no neutral position between disgust and praise. Advocates welcome it as multiculturalism while scared naysayers recurrently refer to it as the end of all that is great. Personally, I do not understand the gloom-ridden and frustrated side of things. From the beginning of events, aren’t we all from somewhere else? And what is so great about obese white guys pumped up with racist rage, insisting on exposing their pale ass-cracks every time they bend down to pick up the pieces of the glorious past that they themselves consider to be the true inheritors of? No, three-quarter cargo pants hanging too loosely between a set of blue crocs and a black tee that says F.B.I - Female Body Inspector, that is really the major concern of our time.

I write this because I am obviously an enthusiast. I love a cultural blend. At times it reaches bizarre and awkward heights, this relentless hard-on I have for travelling cultures and the exotic concoctions that emerge as they pollinate new grounds. It feels almost morally wrong and unjustifiable, this desire to learn and witness what will happen when two cultural contrasts react together as they are crossing each others ways. Like a mad scientist I approach these gigantic test tubes of society. Is it a match? Will it explode? How will a hybrid offspring of these forms really take shape? With baffled awe and disturbed excitement I follow the outcomes. The great migrations of mankind. Just thinking about it makes me feel comfortably small and reassuringly insignificant, a bit like laying beneath the star-filled night sky and letting the almighty universe belittle one’s own trivial existence. It’s total.

Kintaro makes me crazy like that. The small humble izakaya in São Paulo’s boiling Japanese district Liberdade embodies every aroused sentiment that the exoticisation of migrant stories may have the power to evoke. It is pure hybrid porn, a peculiar encounter of two distant credos of life which on the surface appears as worlds apart. Japanese settlers at the Tropic of Capricorn? Sushi, Skol, zen and samba altogether? Yes. As disparate and divergent that the deferential and formal Japanese mindset may stand out in relation to the exuberant and unconstrained Brazilian one, this marriage of cultures is roughly 1,8 million stories told true. Only in São Paulo half of these “nipo-brasileiros” resides, an impressive figure making this city the obvious capital for the nearly four million Japanese people exiled around the world. And just this simple notion of a Japanese diaspora is in itself intriguing. Japanese people are not like Germans, Italians or the Chinese. Historically remote and isolated in their far east island country and never notably plagued by colonialism it is not like keen migrants that they have made their mark on earth. Still here they are; an impressive gathering of human specimen contributing a whole lot to this megalopolitan namesake of the apostle Saint Paul. And attached to this place they have been for more than hundred years now, ever since their poor ancestors jumped off the boat in the nearby port of Santos and later went on to work on the coffee plantations that surrounds this giant city. Today these people represent something that can be perceived as both unique and obscure. It is the idea of a second Japan, foreign to its origin but still attached to it both by memory and heart.

It is thus not for nothing that drinking at Kintaro brings about a puzzled feel. An insanely cold Cerveja Antarctica paired with a glass of smooth sake makes a rare boilermaker like that. So does the clientele of young and rowdy Brazilians, fresh in the starting pits of a good night of São Paulo adventure, all joking and fuzzing next to old Japanese couples who quietly nibble on plates of tonkatsu and fish tempura. Out on the street the voice of Tim Maia passes by. Que belleza. Lit up by red Japanese lanterns and sweet scents of maconha prensada this makes a street-scene of beautiful confusion. I ask myself; to whom may we raise our glasses as we bring toast to this muddled spectacle? To the joys of Edokko or Paulistanos? Between Liberdade and Ginza, it is all very vague.

It is probably this blurry sense of location that attracts the most. It fills a void within the depraved exoticist which the conventional escape cannot satisfy. Far-flung Brazil is not enough. Neither is the enigmatic Japan. We now crave the elevation of them two together to appease our endless appetite for the nouveau extreme of mankind. A less flattering trait, seen in this light. The yearnings of Japanese Brazil makes a case of seductive orientalism that has travelled the world and caught jungle-fever in this Latin American kingdom of outmost subtropic exotica. Frankly, I feel embarrassed and ashamed. Still I lust for more. It is as if I become a richer man when I find out that Kintaro’s kind and courteous bar owner’s name is the unbeatable cross-breed Wagner Yoshihiro Higuchi. Such epic beauty in a name! The fact that he only tends the bar at night and practices sumo wrestling during the daytime also makes me fall off whichever barstool I currently occupy. This is all too great. A freaking frango-munching and cachaça-sipping sumo wrestler who showers five times a day (yes, Brazilians holds the highest average of daily baths) while humming happily to Sukiyaki? Meu deus, to the promises of the hybrid world I fall flat and surrender.

And why shouldn’t I? Kintaro deserves to be celebrated and it has every right to be glorified. Such a modest tribute it is to this long voyage of ours. The great walk out of Africa. The Columbian exchange. Transatlantic migration. Such great things that have been discovered and shared. Potatoes, blues, Jesus and juicy döner kebab. Freddie Mercury and Nina Simone. Oscar Niemeyer, Evita Peron and that Italian gentleman who invented the phone. With respect and condemnation to all the wrongdoings and sufferings on the way, the hybrid world is really an astonishing feat of ours. Let us pop the god damn sake and celebrate. Cheers to Kintaro is what I would propose. Cheers to Brazil. Cheers to Japan and to the hybrid woman and man. 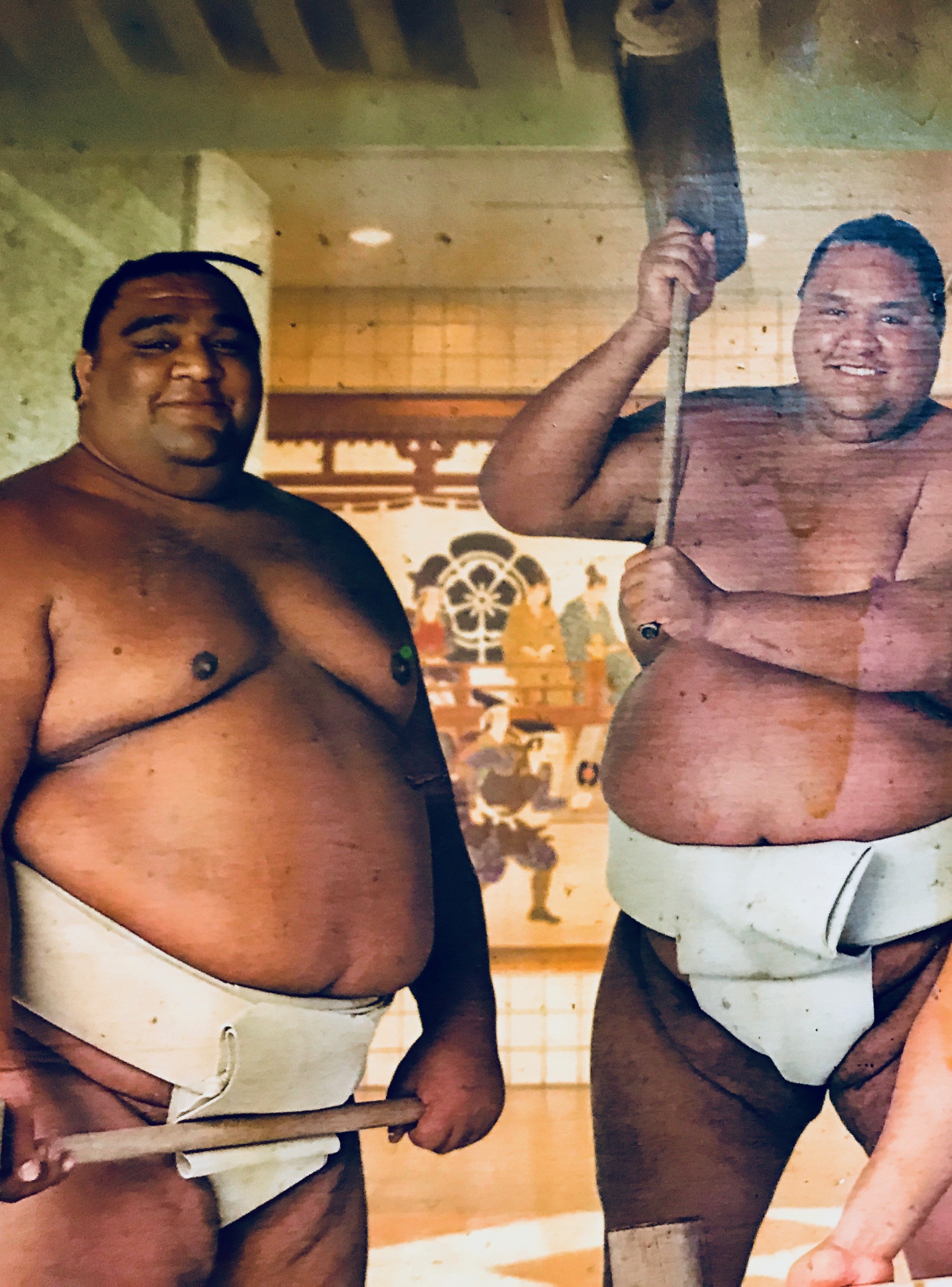