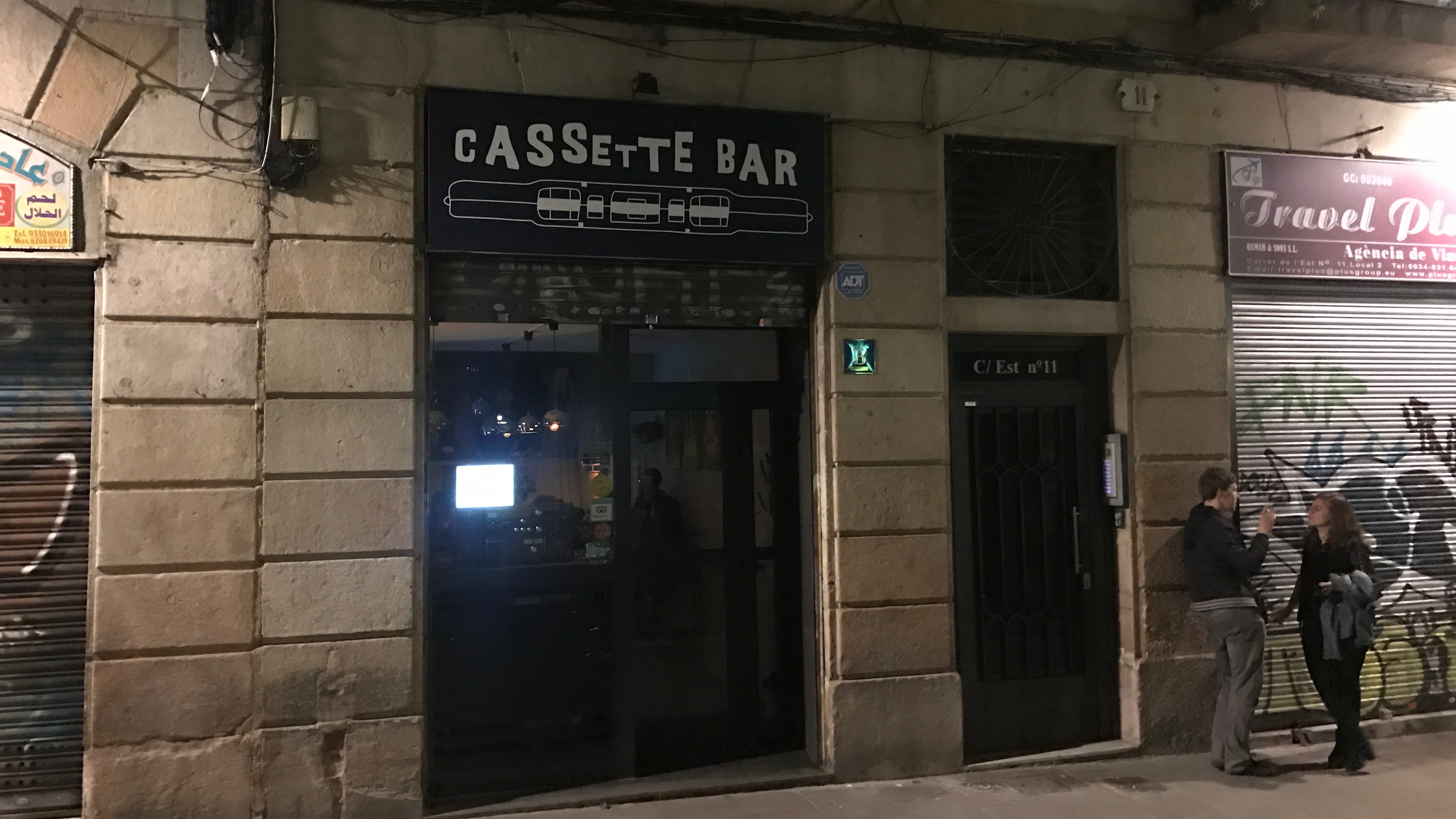 This blog is turning twenty bars and among many things to reflect about this, is the obvious majority of older bars. History and age has outnumbered trend and cool in a striking way.

There are only three bars on the list that can be considered as quite new; Café Havana in Cartagena (2006), Tørst in New York (2013) and Bar Termini in London (2014). One conclusion of this could be that I am running a project based on a mossy and outdated philosophy and that I could just as well have made a trivial blog about model trains, forgotten battlefields or the obscure ponderings about the tragic faith of Kaspar Hauser. It could also be that I lack knowledge of the contemporary scene and can't keep up with the in-crowd. I am yesterday's news.

None of these factors are accurate. Like a chameleon I find my way in any bar situation and my palate is big. I don't want to sound boastful, but this is the truth speaking, not the drinks. I see pleasure in all kinds of bars, regardless if they are high or low, clean or dirty or steep or cheap. In my world, a big spectrum is key to what is captivating, not only for this blog alone but for life in general. But when it comes to writing about it, I am quite convinced about the superiority that older bars hold against the contemporary ones. For me it is obvious. No matter how slick, well-planned and professional a new bar establishment may be, it will most often stand in the shadow of the spiritual sensation that an aged bar institution delivers. This comes down to several factors. First we have the universal desire to connect to history. The power of nostalgia can never be underestimated as it gives people a chance to mystify their own existence and give reason to their insignificant partaking of this overwhelming universe. When encountered by arenas of tradition and history, I believe that this craving of belonging is in someway an easier cross to bear.

But can't this be said about new, modern bars as well? Cannot a bar that is centred around the presence also nurture these sentiments? In fact, I believe that they can. Around what's hip, new, stylish and trendy I perceive a worldwide cult that is centred around an urban ideal which in many ways can resemble a sort of spiritual fellowship or a way to feel connected to the world around us. But this experience is of a more shallow nature and in a way it is not very appealing. It can also be deceiving. Often in a quite elitist and exclusive setting, the core of this experience is many times based on the urge of being relevant, successful and up-to-date. It is basically the idea of being a winner, the notion that you have made it. You matter. This can be expressed in many ways but has almost always the same ambition. Be a part of the now and the movement that dictates cultural change. Aspire for tomorrow and forget about yesterday. Stay close to the avant-garde. Spoil yourself with the best of products and celebrate your successful life situation in lavish style. Or do the exact opposite if this is what is required in the sociocultural group that you identify yourself with. Manifest the urban awareness that you share on a global level with like-minded friends. Worship the axis of cool like they where places of sanctuary. Stay fresh, stay clean. Never stay content. Always change.

I do not want to criticise this as something false or delusionary. In fact, I also rely on these distractions to help me get through the day. Besides, many of the older bars that we praise as humble oases of non-pretension have once been the exact opposite. They were also the hype, yet they were so during another time. But I have to say, and this I do with the deepest respect for so many talented people in the industry, that even though the capital of knowledge and money is so much bigger today than before, people seem to fail radically in the understanding of what makes a bar to a real and meaningful experience. A bar is for the moment, not for the retouched photo. A bar is for the people, not for the imagined. A bar is for living, not for pretending. That is what I believe.

And of course, I am a lost romantic. I put more weight into the faded beauty of the past than at the action of the presence. In many ways, this also makes me a cynical bastard, always dreaming of something that isn't today. I am however right in this matter. With age comes greatness. There is a reason some bars live longer lives than others. It is because they enchanted their communities with something so special that they deserved to survive to this day. They had the secret product so they never needed to change. Neither did they have to die out. As the years passed by, their own history became their biggest asset, making them to living legends in this thirsty world.

Honestly, it should be said that this is not a fair game from the beginning. A contemporary bar can never match the atmosphere that is made up by the history of an older bar. All those lives, all those people. Every one-night stand, every proposal. The many barbrawls, the many treaties of peace. To use the most worn out and clichéd metaphor; An old bar is like an aged bottle of wine, with the years it only gets better. More complex. A sip takes you on a voyage, not only to the terroir of when it was made, you can also sense how this wine has lived and grown through the years of its existence. A beautiful thing, to say the least.

So to really matter in my world, the contemporary bar really needs to dazzle. I want some serious fireworks to even consider it as one of thousand, as one of the greats. A hard and almost reachless task to be honest, as what I am looking for is reason and purpose. I want it to show me that there is also meaning and depth in the bland presence that I myself belong to. That the incomprehensible now also matters.

I found an experience like this in Barcelona two weeks ago. The place was called Cassette Bar. A small place in El Raval, I ended up here after spending a night out on my own. Deliberately, I had just visited "contemporaries" this night and they had all been lukewarm experiences, on the verge of drunken disappointments. Luckily for me, I found my way here at the eleventh hour. I don't know if it was the fact that I was in a rather mellow mood at this time of night but as soon as I had scanned off the premises, I knew this place did it for me. Like a circus ropedancer it managed to balance the thin line of obstacles that often challenges these sort of bars. It was simple but based on a deep thought. Tough and raw but still with a homely vibe. It was cool but still warm and it made me feel relevant but never anxious. It was dark but still shining.

As the name suggests, this is a house dedicated to those relic artefacts we once used to refer to as cassette tapes; plastic rectangular objects of amazingly poor sound-quality. The owner is apparently a collector which may explain the rise of this temple of worship and throughout the bar there are reminders of these technological dinosaurs. You got a bar lamp designed out of cassettes at one side of the bar and if you look down at your feet you can see that there is also a floor lamp that is covered in tapes. It would be hard to miss the epic boombox placed over the bar as well. All of this is of course a great example of a massive hipster erection, where the nerdy postmodern play with retro is the grand sum of cum. But I don't mind. I don't mind a bit at Cassette Bar. Here it is so thoughtfully played and it never gets annoying or embarrassingly quirky. Never far-fetched either.

I felt good at Cassette Bar. I was staring into the television that was placed in the right corner over the bar. It was turned on but showed no channel. A war of ants. As I got lost in this scale of grey I felt like I lived as much in the early eighties of Tony Wilson's hedonistic Manchester as I had been thrown into the future, a world of abstract vision and progressive practice. I was Billly Elliot in outer space. An interesting blend, that of absolute retro and futuristic claim. But also a beautiful tribute to a time that too long has been the laughing-stock of style. The eighties. Too often ridiculed and stereotyped as soulless, flashy and embarrassing, here it was portrayed with respect and nostalgic tenderness. This was the eighties of cool and integrity. The Specials, New Order and Daniel Johnston.

And as an upbeat remix of Suicide's classic hit Dream baby dream elevated my fried mind, I found myself inspired and confident. This was where I wanted to be. This was how I wanted to feel. It was fast and new but I didn't feel estranged, I felt connected. There seemed no reason to doubt the presence anymore, I saw no dark holes where to question the insignificance of today. I asked myself; maybe the now still matters and maybe can they live side by side, the romance of the past and the constantly changing present-day?

Drinks? Skip the fruity versions of Mojito that is still plaguing much of Barcelona's nightlife and head for a cheap but strong Gin & Tonic made with dedication and love.

Munch? My late visit did not call for this but rumours says that early evenings means a free tapa with every drinking order, Granada-style. 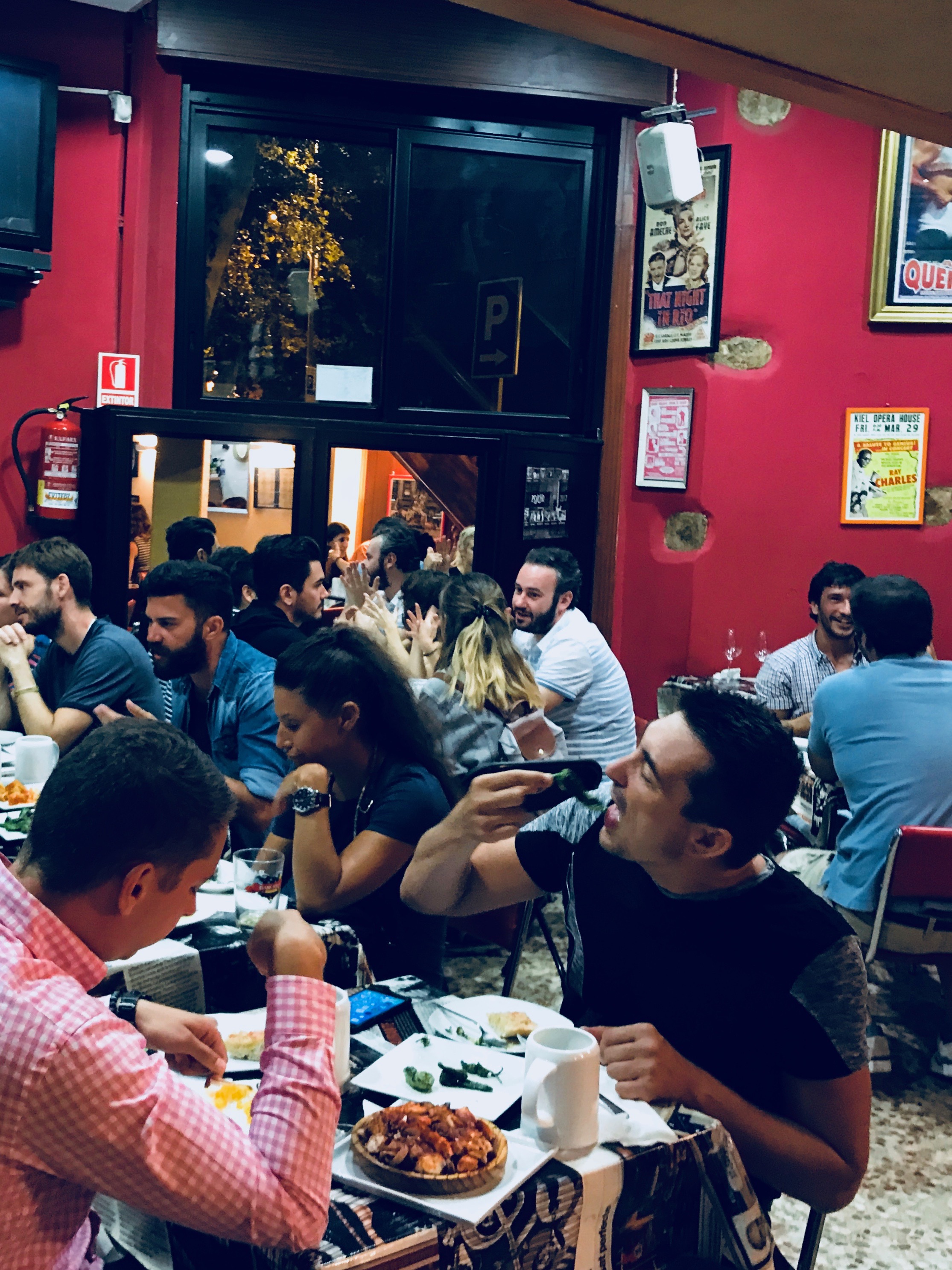 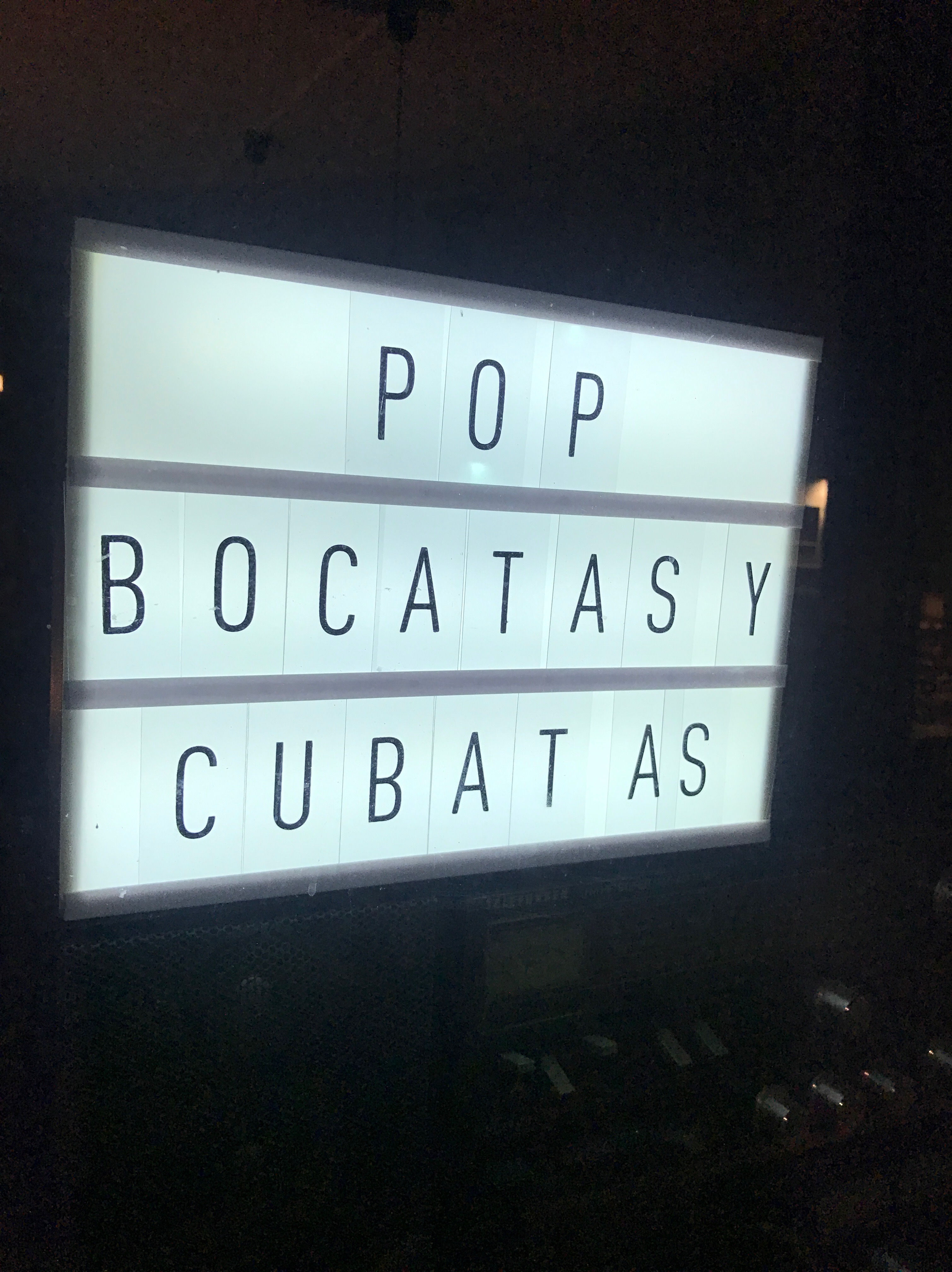