Plot. Midsummer's Eve. It is a surreal and special Swedish day. Once a year we rush to the countryside to get together in a curious celebration of the summer solstice; an event that is marked by an always reliable rain, monstrous amounts of alcohol and a hangover that persecutes us until the next time we foolishly decide to do it all over again. The reports are constantly troubling. A classic siblings stabbing over here, a lethal car crash over there. Most worrying however must be the eyewitness testimonies of grown people dancing around in circles like frogs. Yes, we are from Sweden. All year round we do our utmost to remain true to a boring reputation of ourselves as being stiff, insecure and law-abiding bureaucrats who neither have the time or the cultural capital to utter a simple ‘hello’ but just this day we get liberatingly smashed on akvavit and we dance around like frogs.

‍Trivia. Although Swedish people like to think about Midsummer as something so anciently rooted in our culture and as something unique and only for us, it is really nothing of the sort. None of our mushroom-eating and rape-crazy Viking forefathers are reported to have prioritised any leisure time to engage in these specific rituals. They were of course fully occupied with other burdens of their time; once again, raping like crazy and tripping on fungus. Instead, the Midsummer tradition as we know it today, is actually a ritual quite modern and originally from somewhere else. From the beginning it was in fact a Roman-Catholic celebration of John the Baptist’s birth, a fundamental aspect which our Scandinavian neighbours still have the historical decency not to forget. Top this detail of oblivion with the fact that many die-hard key elements of Midsummer are phenomenons that we have stolen or imported from abroad. That big phallus-looking green maypole that the whole party circles around? From Germany. And the unexplainable frog song which we dance so vigorously to? A marching song from the 18th century that the British mockingly sang about the French. Swedish Swedishness, not so much.

So is Midsummer Festival really not Swedish at all? Of course it is. The most Swedish trait of them all is to learn and borrow from somebody else. And to do this properly. Swedish meatballs. Making shitty pop out of rock. Secretly capitalising on warfare selling guns and whatnot. These aren’t Swedish inventions, we just learned from the best. To conceptualise a confused mishmash summer party where to get hammered like Thor the God? A no-brainer for us Swedes.

Superlatives. Then imagine this non-Swedish Swedish celebration as it is being performed year after year, being constantly in change and constantly in a deep drunken blur. I know I can. For me it is very close to heart. Each year, for many more years than I can remember I have been a pilgrim to the very same place, a place that is more special than most. Tucked in deep within the South Swedish forests, a warm and big-hearted Swedish-Uruguyan household annually greets a disparate group of hippies, bobos, oldies and kids to an impressive execution of a summer fantasy that is both beautiful and weird. As if a Swedish Snow White migrated to Las Pampas and then returned to her fairytale glade. Back home she brought with her a different mindset, a bag of mate and a couple of candombe drums. Since then, Midsummer has never been the same. The buffet table of Swedish herring now shares the spotlight with old marxist revolutionaries around an open fire as they are barbecuing meat. Classic ‘snaps’ songs are being sung, only to be followed by the son of Montevideo, Jaime Roos, belting out ‘Adios Juventud’. Skål. Salud. Vamos arriba! Helan går! It is a long and happy marriage between home and far away. Also, it is the perfect axiom of what a retarded right-wing conservatism will never fully understand. You cannot get stuck on Midsummer or Swedishness as something fixed in time or in place. Because as soon as you do, it has already left you at the station and changed to something else.

So, is there really a bar to read about in this immoderate medley of Midsummer thoughts? Well, of course. I will lead you the way. After sitting paralysed for a couple of hours at the great bonfire, altogether run over by the introspective power of Uruguayan candombe drums, then do your outmost to try to stand up on two feet. However, try not to fall down in the extremely picturesque brook that is flowing beneath you unless it is ice-cold akvavit that you seek. Usually, this is where the experienced drinkers around here store their bottles for the night. Instead, pass by the ingenious guerilla-styled outdoors kitchen and head up towards two houses in falu red. You are going to choose the one to your right but before that you will need to stay disciplined and not fall into the temptation of crashing the remarkably romantic football game that a couple of kids have initiated on your left. Neither should you get involved with Mr Mind on your other side. He is nothing of a great original character with a great original name but once in his neurotic psychedelic sphere, he will probably convey you into spending the next hour or two beatboxing while he performs a freestyle of ‘gibberish-Korean’ rap. Please, stay strong in this final trap. Because after that lies the biggest of midsummer dreams. We simply call it Bar Galpón.

It is actually not much to look at, this homespun bar counter in the corner of a dark room. It does not even have an official name. Bar Galpón is simple Spanish for the bar in the shed, and this is exactly what it is. Nothing more, nothing less. A jerry-built construction of a drinking bastion inside a wooden barn that aims to please the unrefined kind. Still, this is what we are yearning for a whole Scandinavian winter long. To get out on the countryside, just to get into this simple bar. And by us I could refer to many people with a strong connection to this dreamy place in the woods, but in my world it is the circle around one of the sons of this family and what was once his teenage friends. We eventually grew older but when together, we will curiously always remain in that same immature age. Some of us have been coming back to Bar Galpón and Midsummer for more than twenty years now. And although we don’t spend as much time together as we did in a couch drained in bong water back in 2005, the fundaments of being around this bar and each other are basically the same. Mateo is still a bit too eager to down that cheap taxfree Cutty Sark. Jens still does his best with helping him on the way. Hossein makes weird sounds and Oliver Morales keeps babbling on how Uruguay is the best country in the world. Viktor continues to scare away any sane intruder with his damned and demonic drum'n'bass. And why is Christopher Robert called ‘Macadam Chris’? Because there is a pile of crushed stones outside the barn where he will eventually pass out. Myself, I am in a good mood, manically overpraising each millimetre of this bar. Because I know. Outside there is a world and a Midsummer in constant change. But inside Bar Galpón, the best things still remain the same.

Where? In the middle of nowhere, South Sweden. 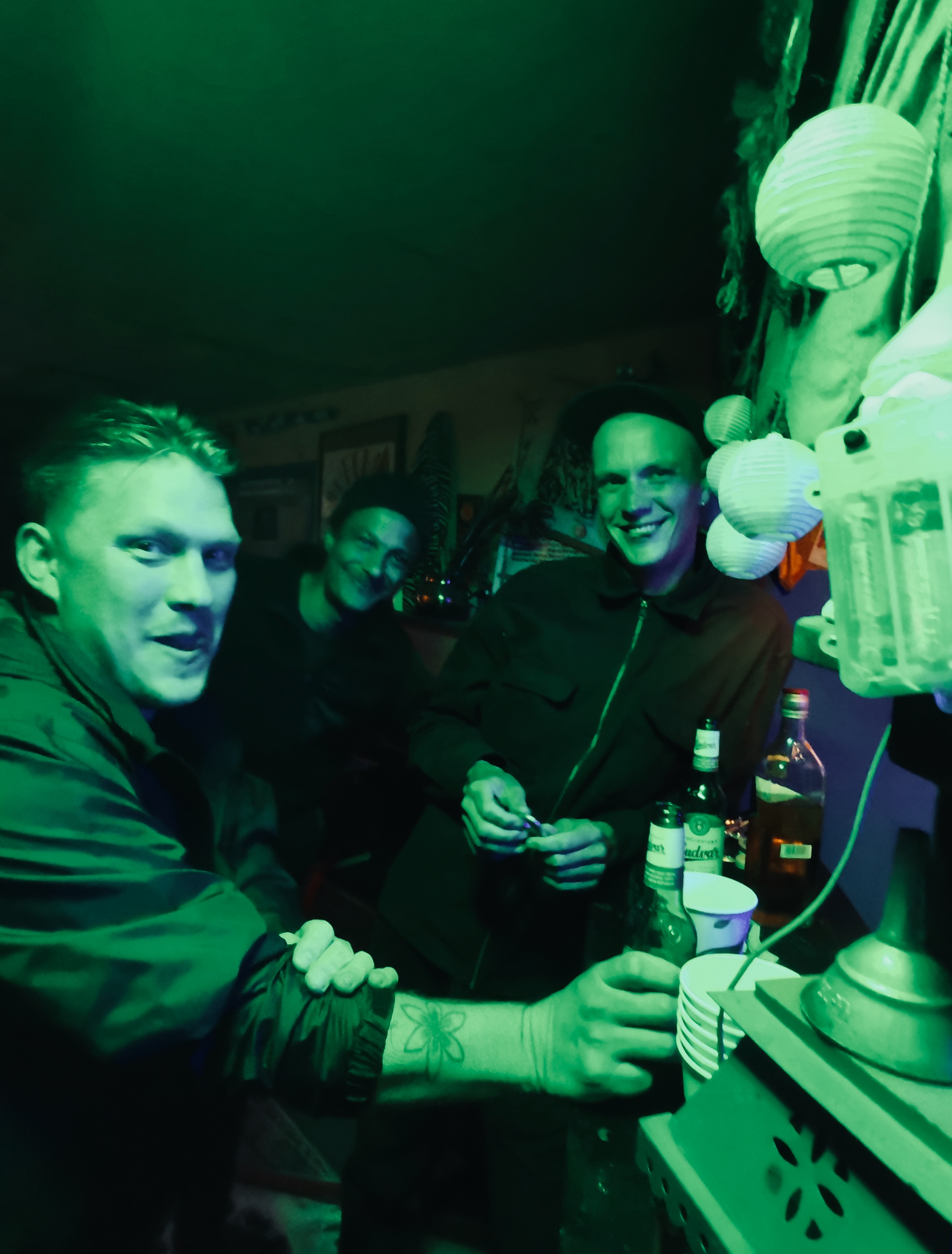