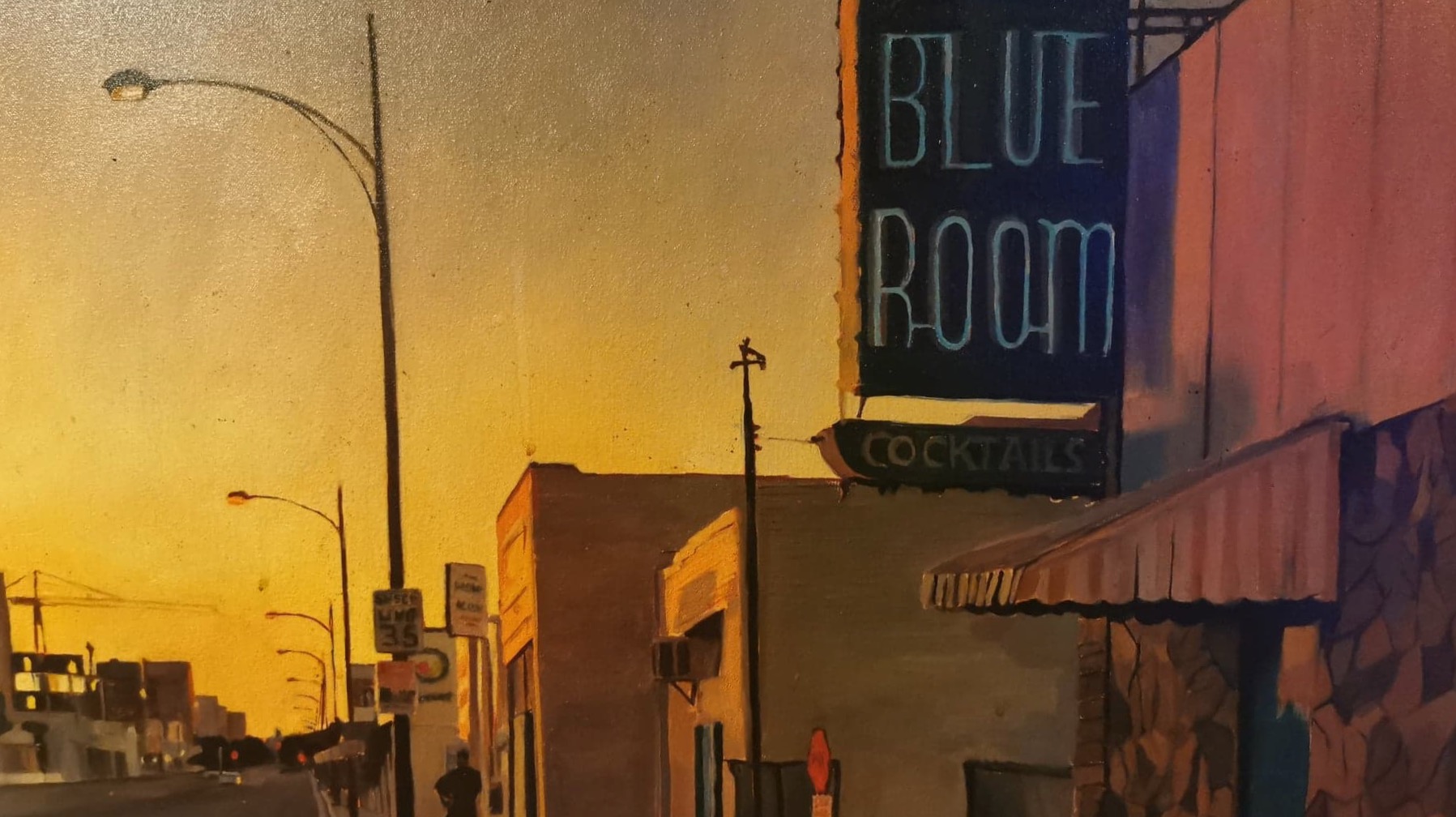 All I got is this angular cheilitis. Foul and burning, this off-putting sore annually arrives at the corners of my mouth exactly fourteen days after New Year’s Eve. It is an unforgivable handicap but also a brutal reminder of the vitamin deficiency that besieges Scandinavia during the dark winter months.

Los Angeles is a bad place to have angular cheilitis. It is very bad. Although the Californian sun is what will eventually defeat this cruel condition of walking around with a Joker’s carved up mouth, it is also this constantly present sun that will spill the beans about what is really going on; I am not from here and somewhere else I lead a lesser life with a lesser amount of vital sunlight. It is simple like that. But also as enviously unfair. Add this frustrating fact to other injustices that L.A will bring up to mind and that lip inflammation gets even harder to accept. The fake glamour of Hollywood stardom that no anxious pretender would ever confess caring about but obviously still struggles to achieve or ignore but most certainly cannot escape because its illusionistic lies permeates every walking soul in the free West. That strikes me as most back-breaking to shake off. So does the intimidating fact that everyone here seems to be either homeless walking tragedies or laidback millionaires. And that reefer smoking yoga health culture casually driving around this urban jungle picking up probiotic avocado shakes while already mentally masturbating to the next crossfit session that it will torture its ripped body with? Inferiorly disturbing. Especially with this crater in my face. Because what do I really got going on? I spend my days getting drived around in the Tesla of my niece’s record company owner of a husband who of course owns a Spanish Colonial Revival mansion in the hills and all I can think of is that all that defines me is this bloody mouth wound. Of course, I have a beautiful wife and two kids who love me. I got many exciting dear friends. I live in a country where most people have enough to eat and I still got my trivial health as well. But are these distractions actually of any value at all? Of course not. Not here in La-La land.

I tell you, both this city and this sore make me want to disappear. Just head straight into hiding. Sure, from time to time I do of course cherish my curious being in this endless and fascinating abyss of automobiles, broken dreams and strip-mall extravaganza but as soon as that exuberant sensation of undressing mankind to its most honest depravity peters out, I once again feel desperate to escape both myself and this place. Los Angeles has got that diminishing hold on me. Thus I thank any existing god for The Blue Room. And any other dark L.A dive like it by the way. In here one can flee every exhausting notion of a better self and stand stripped-down naked in front of one’s own blatant shortcomings, no matter if they come in the shape of an overdrawn bank account, a stagnant career or just this terrorising mouth wound that I seem stuck with for now. This is somehow paradoxically weird because the act of solo-moping in this blue darkness of a Burbank bar would logically only make reality appear as more cruel than what it really is. But in this city of excessive wealth and absurd pretentions it seems as the only sane thing to do. Those stubborn sunbeams that try to force themselves beneath the small door entrance testify to this reasoning of mine. Normally they would represent every positive form of energy that we have in this world but here in L.A they are just unpleasant reminders of the insufficient lives that this considerate but sombre drinking refuge simply will not let in. Light of anxiety, thou shall not pass.

But to praise The Blue Room as just an antithetical refuge to its vain environments would not be entirely correct either. Characterised by its iconic neon sign and an interior landscape of turquoise leather joy, there aren't many cultural aspects of L.A that would come out as more symbolical than this 1950s golden age remnant. It is just enchantingly cinematic like that. Unsurprisingly, this has also immortalised The Blue Room on the Hollywood screen, being the stage of affairs both in Christopher Nolan’s neo-noir masterpiece Memento but also in Michael Mann’s classic De Niro/Pacino gangster flick Heat. A natural thing really, since the Bukowskian-Lebowskian dissipated aptitude for binge-drinking the day away while slowly crushing every dream and ambition that one’s younger self might once have had, does seem to be a big part of what it actually means to live and die in L.A. It also makes the perfect antihero for the big screen. Just look at how a brilliant Mickey Rourke took the washed-out Angeleno drunk to a thing of honour in Barfly from 1988. It is ironically one of the most sober but captivating movie depictions of Los Angeles as a city but most importantly, it offers a way out. Sure, as a movie Barfly does make an exaggerated romanticisation of alcoholic destitution and sadomasochistic bar brawls but it also contains an ideological dimension in the way that it renounces the Hollywood dream. In an urban desert swamp that seems over-emphasised on cars and stars, this take seems directly directed for the average kind.

And this is basically it. This is where one is being taken when entering the dark freedom of The Blue Room. Like the act of claiming ‘sanctuary’ in a medieval church, a boilermaker at a bar like this will give you asylum from the outside wicked and bad. Just like it will bring you closer to peace with things. More and more, that infection between my lips doesn't seem so bad and neither does L.A. From being a hectoring show-off with little compassion for the inadequately mundane, this city of corrupt angels suddenly appears as painfully humane. In fact, this dive counter’s point of view almost makes me feel and bleed for this place. Los Angeles - a metropolitan drama of solitude and despair. Where lonely souls leave their lonely houses to drive around in their lonely cars just to have lonely shots of whiskey in lonely blue bars. That I could dig. It is even somewhere I can treasure and respect. Los Angeles painted in blue. 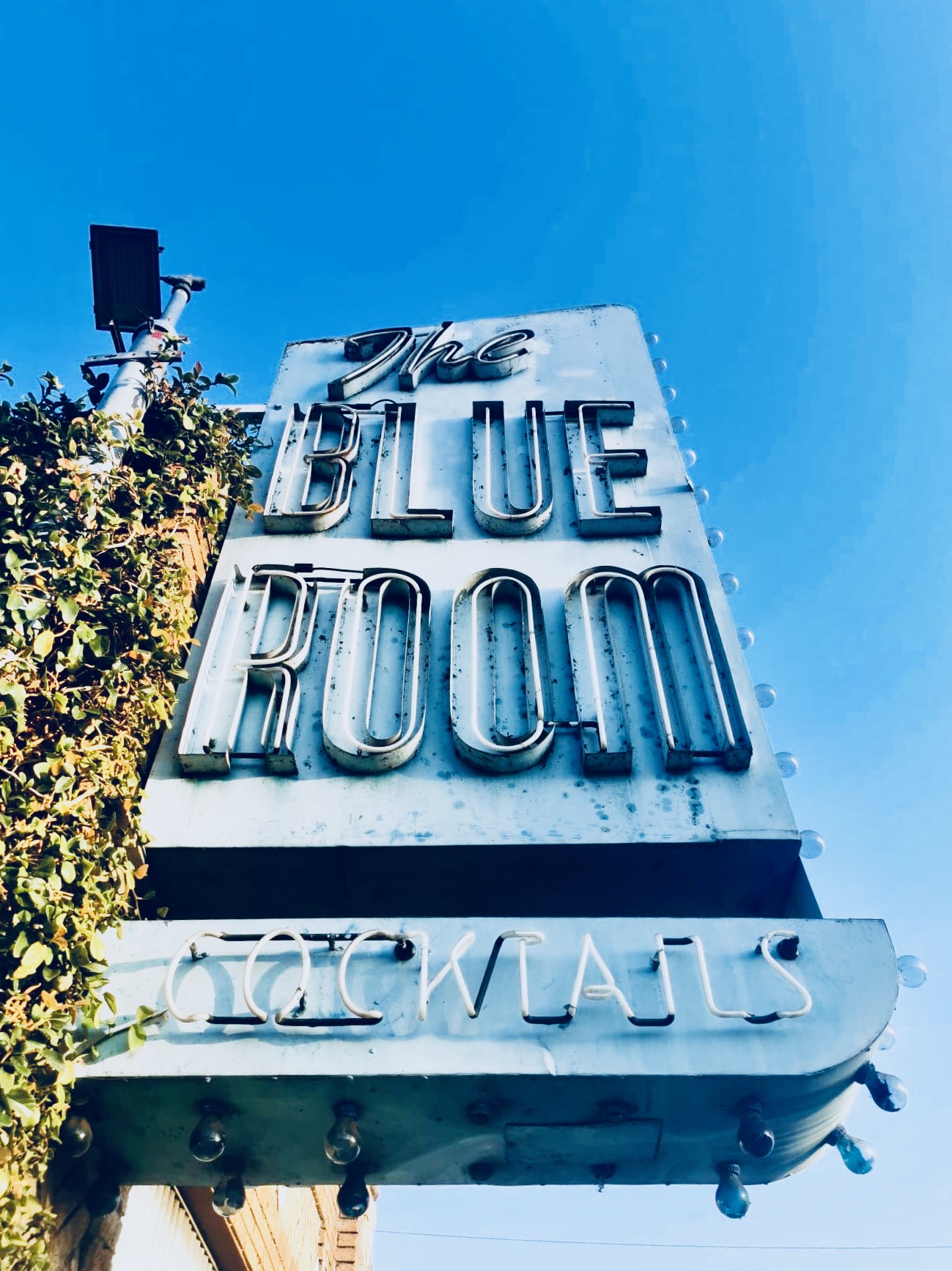