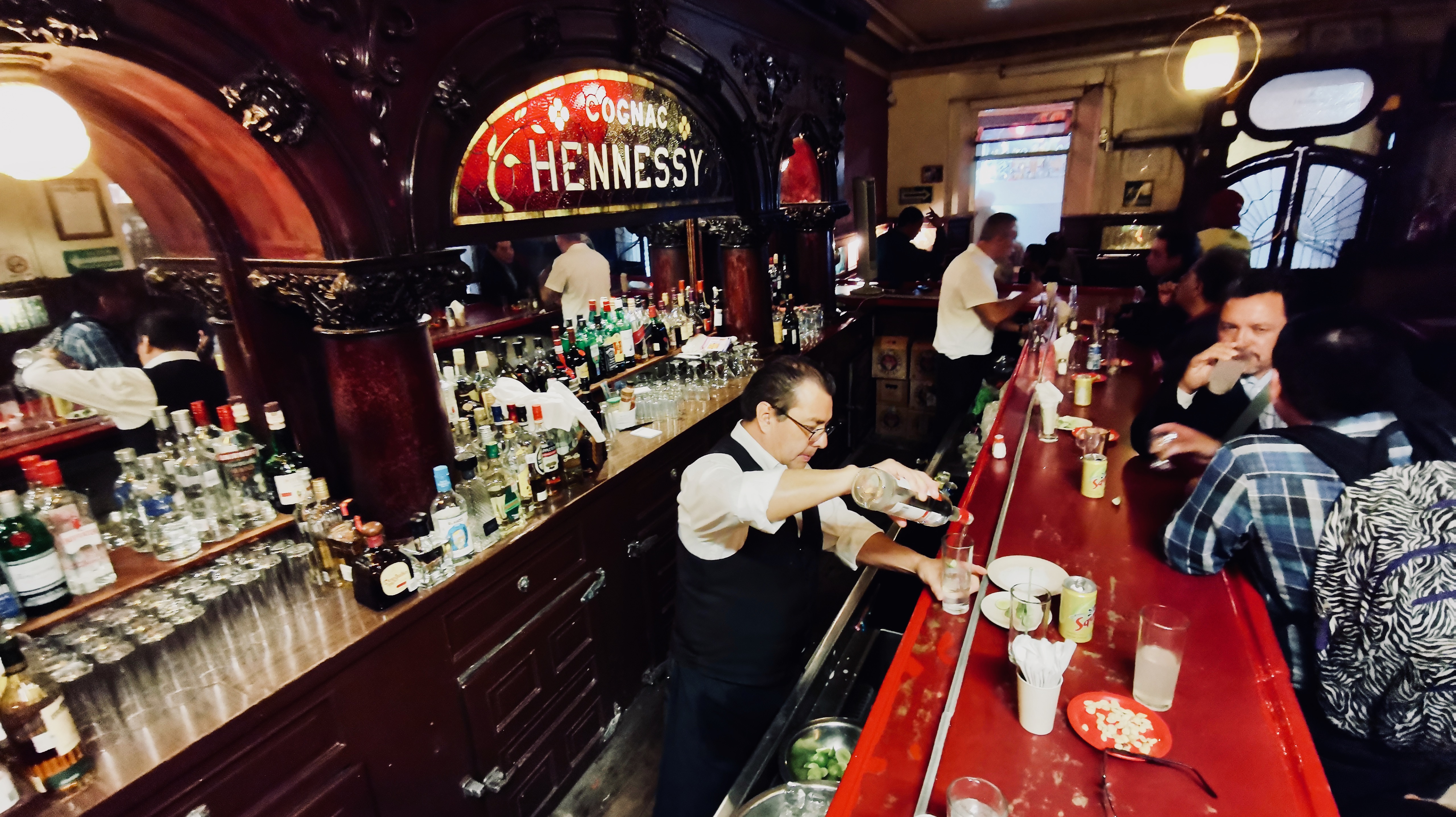 A tall privileged white guy from North Europe walks into one of Mexico’s most storied cantinas and in a bizarre carnage only comparable to the slaughters of Verdun, he downs Modelos and shots of tequila like there was no tomorrow and no heaven on earth.

As he gazes around himself, the tall privileged white guy starts to laugh in mad conceit because he knows that he is exactly where he wants to be. He is in Mexico City dealing with import and with all the fabricated ideas that follows such an adventurous enterprise, nothing is more suited than blowing steam at a legendary place like this. After all, it is within these swinging saloon-style doors that the flairs of a fantasy is throwing a decadent bash. Rogue characters are half-harassing, half-seducing their next innocent prey while corrupt politicians pass suspicious envelopes between them in forgotten, gloomy back booths. In the scruffy lavatory a rolled up peso bill cleans up the house while vested waiters roam the saloon floor, balancing trays of oldfangled liquor brands which, if it was not for stubborn bars like this one, they all would have been extinct a long time ago. Yes, ‘El Tio’ seems far away both in time, mind and place and it is probably because of this that it was once forever engraved into the history of written word. In his 1957 novel Junky, heroin bruised-up beat poet William S. Burroughs mentions this cantina as a place where he lay his hat during his Mexican exile and aside from being conveniently close to the smack errands he might have done in the surrounding Chinatown, surely notions of a poetic Mexico far from the average day and life were reasons why this cantina made it into the book.

They are both stuck in a stereotype, the drug fiending poet and the tall privileged white guy. Mr Burroughs since his autobiographic accounts of a lawless fugitive, impetuously biding his time south of the border in a self-destructive and glorified haze. The tall privileged white guy since he is living out every pubertal make-believe of himself as a rowdy crossbreed between Mr Nice and The Man with No Name while ferociously showering himself in a cascade of Don Julio by the glass. Together they shape the same cliche, the same old hackneyed idea. It is the one of the Mexican greaser and the cantina that this drunken persona calls home.

The term greaser was first used as a derogatory term by Americans for Mexicans during the second half of the 19th century. The origins of the word is somewhat disputed (some sources say it derives from the Spanish word grosero which means rude while others claim that it comes from the fact that Mexicans in the US often worked with the greasing of the axles of wagons), but with the years it became a recurrent way of addressing people in the neighbouring country down south. This especially since the rise of the so called greaser movies, a sort of sub-genre of silent era Western flicks where the greaser character, always a conniving and shiftless soul of a gunslinger from Mexico, took the natural role of the bad guy. This rugged stereotype has since become a Hollywood routine and due to the fact that the Californian film industry has possessed an almost cultural monopoly on how to depict the Mexican psyche, tall privileged white guys from North Europe have been fed only with this version of something excessively misguided and wrong. Most suggestive and depraved is perhaps Sergio Leone’s mad antagonist ‘El Indio’ in For a Few Dollars More but there are countless of other examples as well. Laddish filmmaker Robert Rodriguez may have ‘box-officed’ the most on the modern style greaser in his nineties Desperado-trilogy and one of his long-time collaborators, his own second cousin Danny Trejo, has even taken the ‘greaser villain’ and made it into a personal brand. Cookbooks, beer and ‘OG’ donuts, all with the hispanic actor’s name.

No matter a racist cliché or commodity enterprise, the greaser phenomenon seems glued to the cantina. No wonder really, since outlawed evildoers spend most of their time on the run and are often portrayed as motherless psychopaths without any form of domestic family ties. Seen at the local bridge club they are definitely not. And the cantina as a Mexican institution is really the perfect greaser platform in that sense. Traditionally, it is a predominantly male environment (Cantina Tío Pepe did not let in women or kids until the unthinkable year of 1983) where the evils and wrongdoings of boozed-up masculinity can run free without having to pay attention to any civilised ideals. It is also often cheap, dark and dirty which seems to attract the common thug who is up to no good. It is cinematic as well. When observing the Mexican cantina it does come natural why movie directors with a hard-on for grand film scenes of testosteron-driven power struggles and phallus measuring shootouts rank the cantina high as a setting for shooting their films. It contains a high ceiling, both when it comes to actual altitude and what can be respectfully mentioned between four walls. A lot of dust as well. Then of course tradition. Characters. Drama. Darkness. Pain. As Mexico it is, the cantina is also all of its stereotypes.

So what is a tall, privileged white guy supposed to do, beside staying infatuated with a shallow load of a ‘mucho-macho Tarantinotoxic’ dream? Well, he could wake up to the fact that he is not in a doomed but glorious saloon in Rìo Bravo waiting for the final gun duel to take place and perhaps he could also realise that both Cantina Tío Pepe and Mexico City is much more akin to Paris or Madrid in the late 19th century than to any crazy cowboy myth. The aristocratically imposing stained glass sign above the bar calling for Hennessy surely testifies to this European bourgeois cousinhood. Furthermore, the tall privileged white guy could also acknowledge that while the Parisian café is always portrayed with kissing lovers in amour fou and the Irish pub is repeatedly presented by a tight-knit community bursting out in a jovial singalong, the cantina is stranded with sweaty scoundrels ready to stab you in the back for a fistful of dollars. And while this is a straight-off racist and absurd wrongdoing against one of the most precious symbols that the Mexican culture has, it is also unsatisfying untrue. What happened to the poetry? The art? And the gastronomic wonders that one can expect when entering a cantina? All washed away, just like the tall privileged white guy’s fifth round of mezcal. 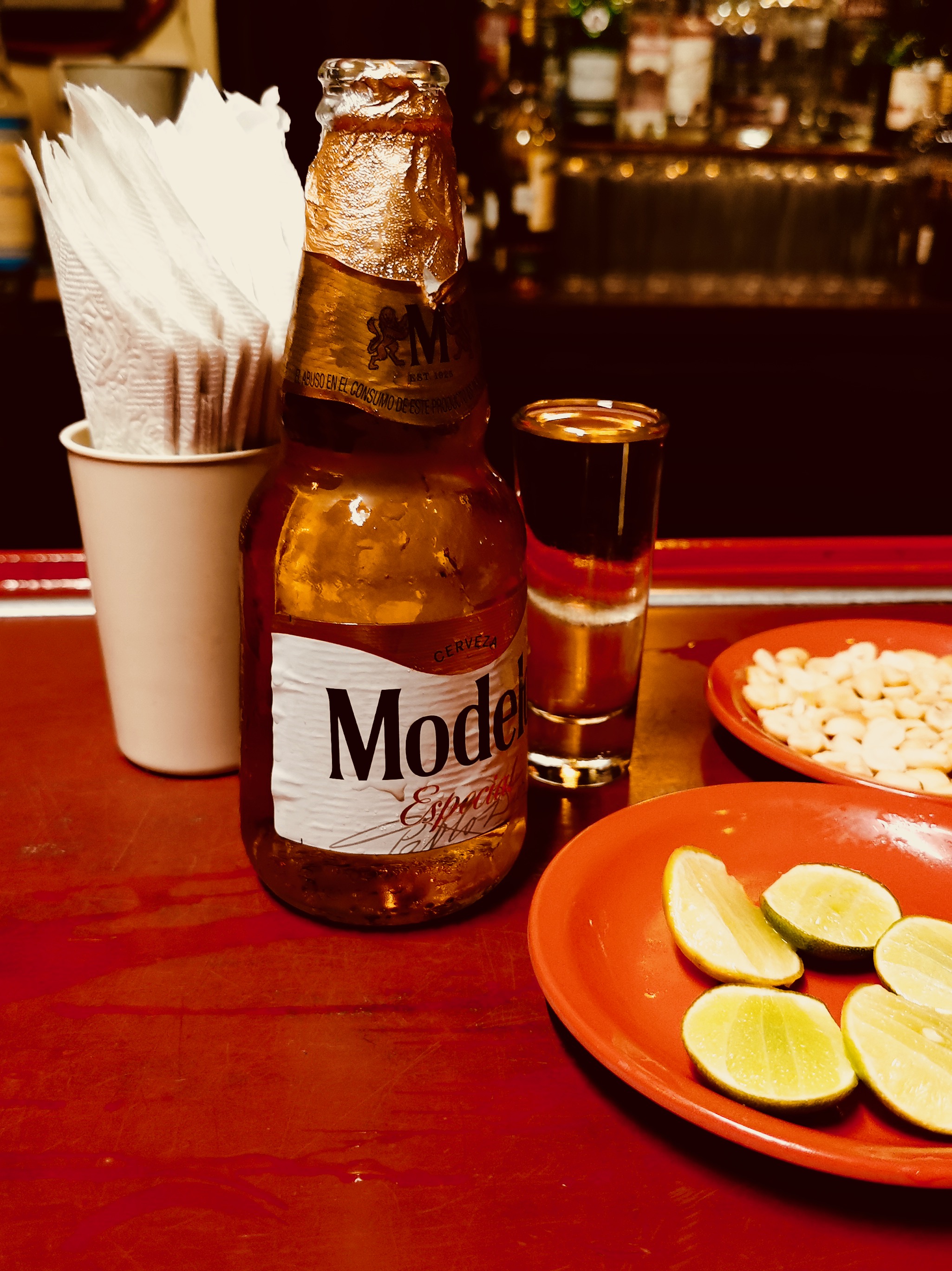