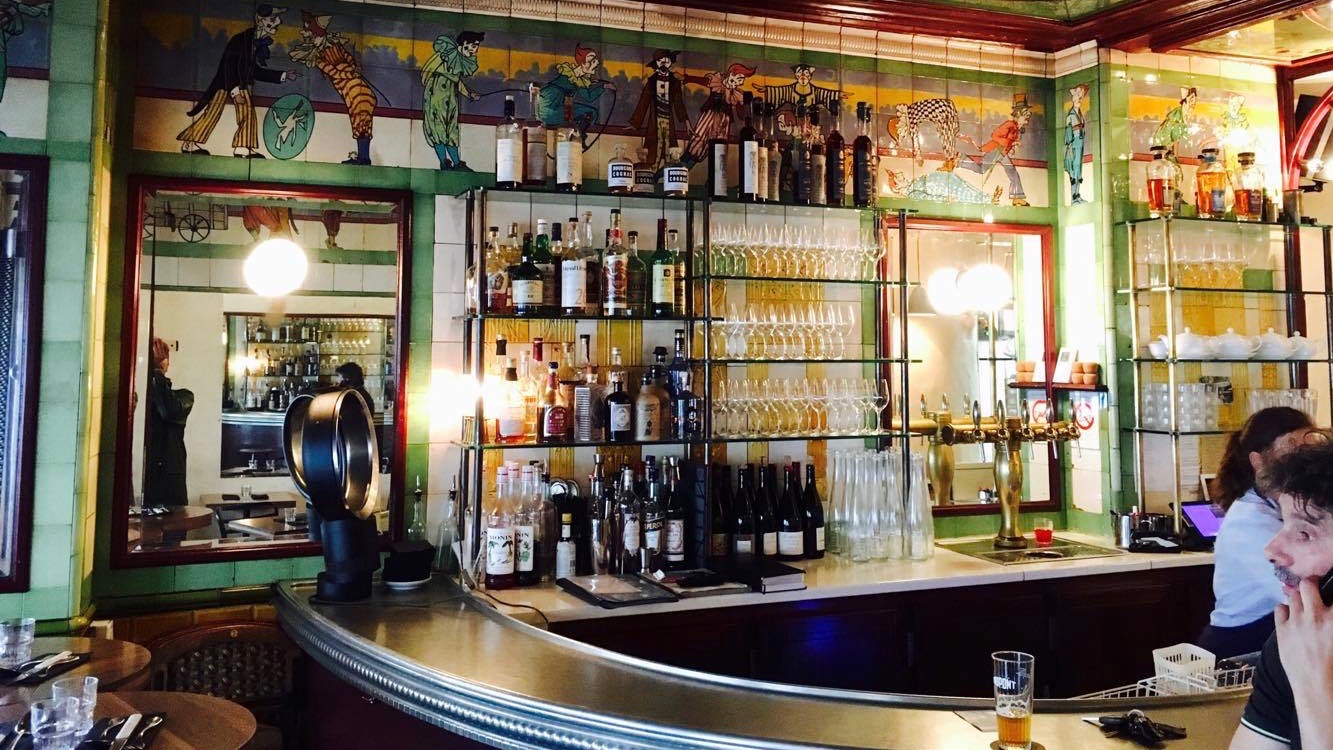 A bar and the life it lives. In many ways they are just like us humans. They are born, they grow up and one day they die. Along the way they live a life of joy and despair, of love and war. They all got their arch, just like us.

Some of them come from simple and poor backgrounds, some of them were born into luxury and gold. Some doesn't even survive their first birthday while others can get older than dirt. Life is all a big great lottery, one can never foresee the turns of its long and winding roads. We can only imagine all those destinies out there. A bar in Dresden vanishes over night as the British bombs are hailing over the city. In another country and another time, a caring enthusiast adopts a forgotten dive as it screams for some care and affection. Ten years later this place may be blooming because of the love it was given. The same can not be said about the bar just a couple of blocks away. Once an elegant piano-bar, some opportunistic schmuck turned it into a contemporary nightmare, burying the murals on the walls in a lime-green diarrhea and replacing classy Saceracs and devilled eggs with health shots and poké bowls. Among many scenarios, that's a frightening one.

No matter the outcome, there is no mercy as the wave of change breaks in the reef of time. That is a reality both people and bars share together. Neither can anyone of us escape the fate that is being handed to our vulnerable existence. Where we end up is who we are. Rich, poor, dead or alive. One can only trust one's guiding star and give wishes to the wells.

Look at Clown Bar, Paris. Founded in 1902, this was a child of the circus. This was where the clowns and acrobats of neighbouring Cirque d'Hiver slipped out through the circus side door for a quick "between the acts" or where they could simply cool their heels while waiting for their clown-shoes to be made or mended at the cobbler down the street. Many was it that also stayed at the rooms being rented out above the bar and when travelling circuses came to town this was a natural meeting point for people in the business.

A worker's bar, even though of the peculiar kind, this place embodied the spirit of the Parisian Belle Epoque. With ceramic tiles portraying clowns in action (of course derived from the legendary factory of the northeastern town Sarreguemines) and a textbook zinc bar shaped as a horseshoe, this was Art Nouveau at its height. Organic, colourful and with a serious load of joie de vivre this was the prototype of the era and a remarkable example of how gifted craftsmanship could be found at the most modest places.

Even though many people would probably associate clowns with a rather imaginative take on life, I am pretty sure that even the most whimsy and fanciful Pierrot would fall of his chair if he saw what is happening in these premises today. After a long time of being a well respected but somewhat forgotten institution of the great legacy of Parisian Art Nouveau, today Clown Bar is one of the hottest tables in the City of Light. Gone are now the predictable bistro-fare that reigns over many of the city's older establishments and so are the clowns as well (I could not spot any, at least none in stage costumes). Instead, this has become an uber-sophisticated but casual house of neo-bistronomi, brought to us by a very talented chef from Japan, Sota Atsumi. He is part of the revolution of a group of ambitious, Japanese chefs that for the last years has set their mark on the French capital's food scene.

Backed up financially by the team behind Saturne, a modern Michelin restaurant inspired by Nordic aesthetics, Atsumi's subtle but homey food philosophy now attracts an international crowd of bohemian bourgeoisie, foodies and wine nerds. And even though one could point out the pop-art-wine-etiquettes and the hidden cutlery under the designer-tables as just another way of the same procedure, there is still a crucial difference in how this social space is being used today and in the past. Back then, this bar was rooted in a deep sense of locality with its prime purpose of serving its big brother neighbour, the circus. It became synonymous with that circus culture and it is like that I picture it being back then, as a very personal island in the early 21st century Paris metropole. Today, it is more of a misty and placeless setting which a ceaselessly flowing elite of urban nomads decides to adopt for the night. From Atsumi's Japanese team in the kitchen to the rootless crowd of guests in the salon, it feels like we are all on our way to somewhere else, we are never really tied to this place. May it be the erratic lifestyle that we claim or the financial privileges that we in fact posses, but no matter how much we feel for this place, we have still no option than to continue this wilderness wandering of biodynamic greens and funky orange wine. Of course, all broadcasted live on Instagram.

Since I visited Clown Bar a month ago, I have been thinking a lot about this place. It is, despite its trendy cynicism, a very interesting bar. I am many times, as I probably too often point out, struggling to find the pleasure and interest in writing about slick contemporary bars. To find a hip bar that still has a solid history is with this in mind something of a gift from above. But not just because of the stubborn insistence that everything needs to be old. It is more than that. The dynamics and striking contrast between old and new illuminates many relevant questions about the existential nature of a bar. I am thinking first and foremost about the matter of storing and cherishing cultural heritage.

I am looking at the modern Clown Bar and in many ways I am intrigued. Here is a venture that has shown a respect and deep understanding for the importance of staying connected to a part of local cultural history. The renovations that were being made when reopening the place in 2014 were thoughtful and of good taste. Little has been done to the old symbolical highlights except for some well-deserved polishing and I sense a sincere appreciation from the new owners towards the original work and the ones that carried it into effect. But it is still very bold, not at all a meek annexing of history. Around Clown Bar's traditional elements a progressive adaptation takes hold of the space and leaves it nowhere close to a mossy affair. This is fast and sharp. The old yellow walls has gone minimalist white and each own detail from furniture to porcelain is in line with a dimmed and discrete modern way. This meeting of different times doesn't upset as it is not intended to provoke. This bar is much more confident than that.

You could say that Clown Bar has had its share of luck in this life. It is not every bar that gets to hang with the in-crowd at this old age. 115 years old today. But time waits for no one, to quote an old Stones tune, and as the crowd moves, Clown Bar remains still and surrendered to an unpredictable fate. And even though the Clown Bar edition of 2017 is a great success, one can never know its status in a couple of years. What happens when the young, enterprising people behind Saturne wants to challenge themselves with a newer and hotter project? When Atsumi is cooking somewhere else? Where will Clown Bar be when Le Haut Marais has gone too established and dull and left the torch of cool to another area? In the hands of a less serious and sensible owner, in what safety are these walls of cultural heritage then? It is actually very fragile, everything about it. I guess life is in general. What I do know is that with every touch-up that is done to this bar there is a sad clown turning in his grave as bit by bit of his history disappears. But what's comforting and also rather appealing is that with every renovation another layer of time is added to this creation. Just like a ring on a tree, it is there to tell us about a life being lived. But also how that life went into change and how it turned out to something else. Because we all matter, we are all producers of life. Despite our own indifference towards the present time or the future’s dismissal and praise of the marks we leave, it will remain as an integral part of a new, grand sum that is pushing us all forward.

Munch? It is modern, yet traditional. Light but still heavy and rich. It has an international compass, yet it is very typical French. While reflecting back on the food at Clown Bar I realise that this chef is a genius, at least he cooks like one. The very sophisticated way of presenting the peasant-like Pithivier filled with duck and foie gras and a smooth puré of rhubarb on the side, was as lavish as it was honest countryside. I applaud this. 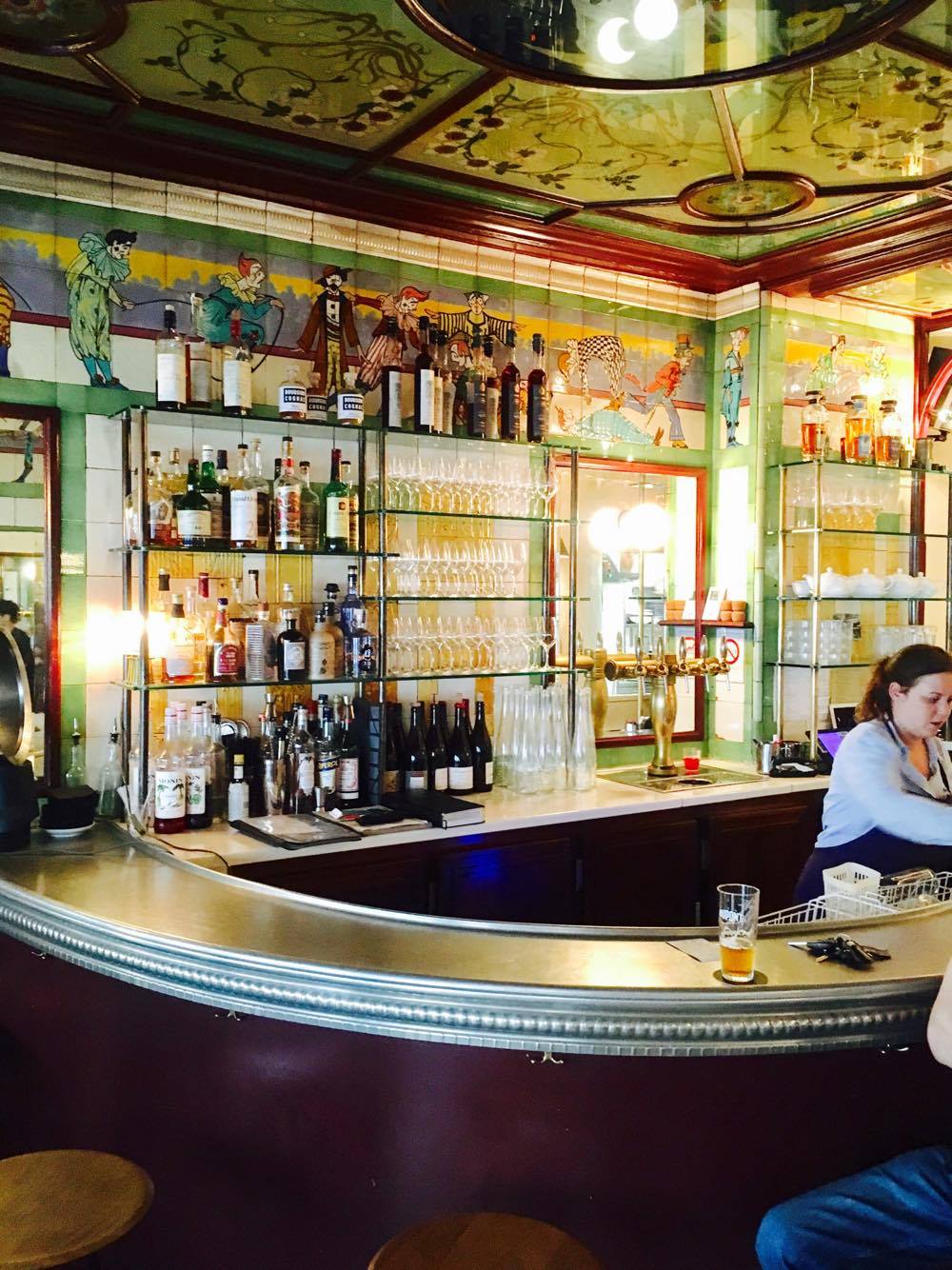 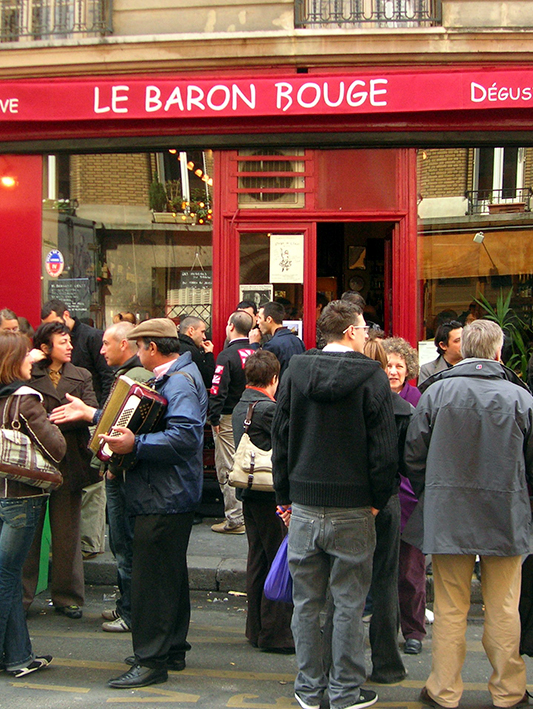