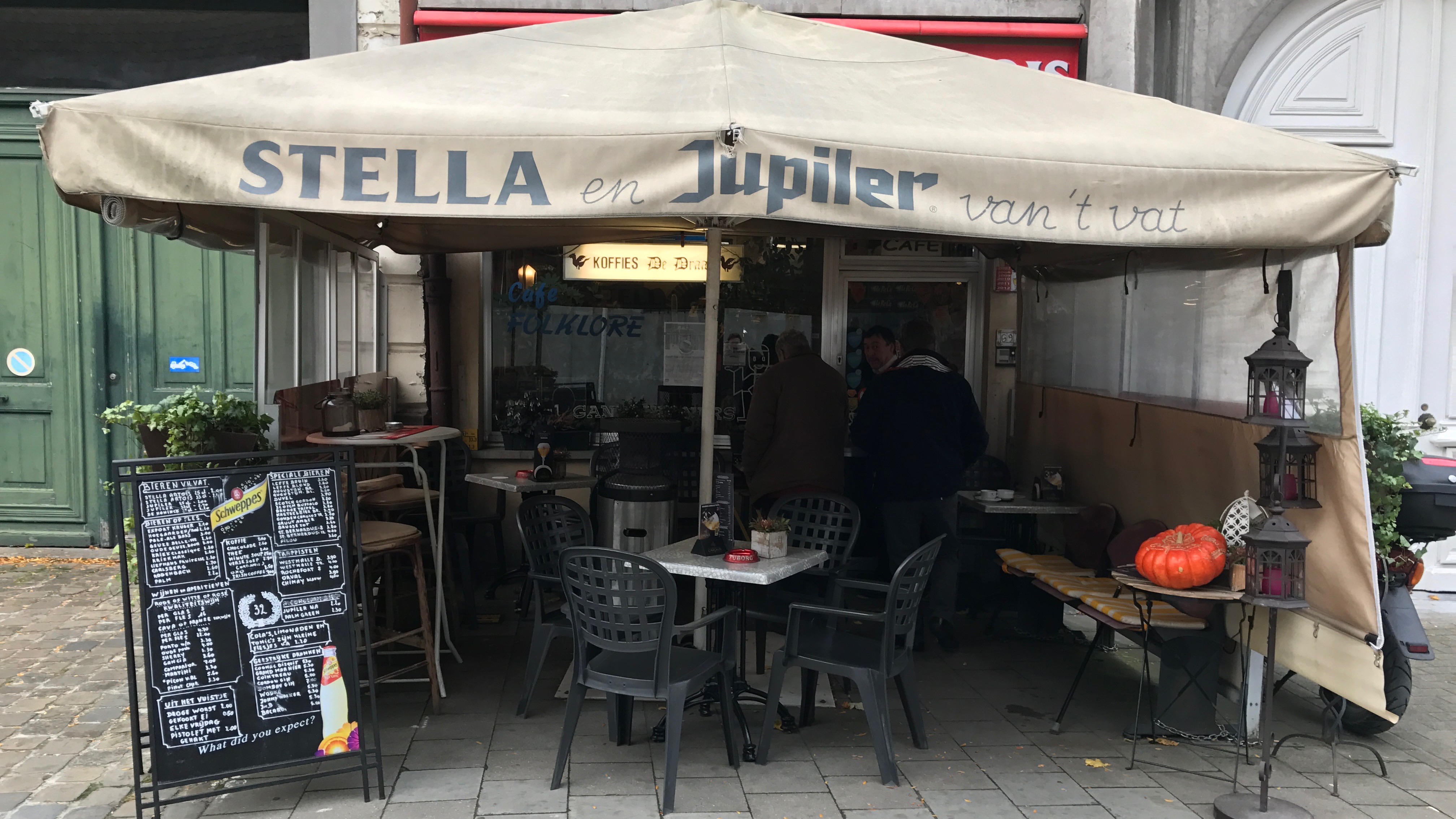 We are not men. We are silly and confused boys, just trying to prolong the post-pubertal state of stagnation and immaturity. No matter what we wear, how much we earn or which woman we convince to bear with us, we are still no more than teenagers trapped in a couple of weary and aging midlife bodies.

This I thought to myself as I observed my hungover company on the other side of the table. The three of us had been friends for a long time now and for all that I could see, we hadn't changed a bit. Aside the fact that one of us was becoming bald, another guy was developing grey hair and the third had just started eating pills against high cholesterol levels, we could just as well have been breaking balls in the old high school cafeteria as sitting here at this Flemish beer café. The topics of conversation was as immature as it always had been, so were the jokes made out all of that and we had apparently still not learned when to call it a night at the right time. This Saturday noon in November we were three fallen soldiers, victims of our own drunken stupidity.

In fact, it was all a big contradiction. Here we were on a weekend trip in the medieval city of Gent, a sort of declaration of us entering the life-form of mossy fossils that were about to substitute exotic adventure, nightclubbing and female appreciation with too much watching football, drowsy drinking and the inevitable outcome of sloppy penises. We were doomed for the middle age as soon as we had booked those immorally cheap airline tickets. Still, we had since our arrival behaved as childish as a couple of newborn babies on their way home from the hospital. But I guess that this was bound to happen as well. Release three stoned morons in an environment like this and absolute degeneracy will break loose. Experiencing Belgian culture was just too much of a giggle than for us to behave like grown-ups. We just couldn't resist the temptations of making fun of everything we found weird and awkward. The parodical Flemish dialect, the almost unpronounceable street names and every godsend character that popped up on us time after time. Our stay in Gent was like an amusing montage of the bizarre and curious. All this put in a brown context of medieval fog, a decadent cuisine trapped in the nineties and the strange fact that we somehow had ended up sleeping at an old monastery was all too much for us to let slip through our fingers. The children inside us were screaming at us to let loose from the corrupted adult world and so we escaped our own realities, if so just for a couple of days.

And as we staggered along Gent's puzzling canals in search for the next drink, our childish fantasies took over and we started to develop an imaginative story of the city. For no big reason actually, mostly because we are unstimulated fools with too much time on our hands. Like three deviant maniacs we wandered back and fourth and egged on each other the weirdest of theories. It is somewhat blurry to me now but I believe it was centred around the idea that this city was spellbound by some sort of troll-like creatures that took all us visitors as prisoners as they had bewitched us all with the magic Stoofvleessaus, a Belgian meat-sauce that is a condiment served by the city's street vendors of French fries. Dysenteric and embarrassing gibberish of course, even though it would have made a decent manuscript for a Peter Jackson splasher movie in the late eighties.

So with a heavy head and an awkward face I gazed at this trio of ours as we had installed ourselves at Café Folklore. Who are we really? Where are we heading with our lives? Evidently nowhere for the moment as we had order a couple of bottles of Orval from the friendly hostess Marina. This again proved my theory of our inability to leave our juvenile behaviour behind us. This constant yearning after an extra-mom willing to embrace us at our weak and fragile moments on the road. It was so ridiculously spot on.

But needless to say; either the beer or the caring from an older woman was helping and in a short time we found ourselves back in top shape. Back on the horse of irony. And what a place to be so, this dreamy beer café in the enchanting neighbourhood of Patershol. Owned by Marina and her prolific husband Jaques "Jackie" Verdegem, this was nothing but a dream for someone in search of the true nature of Belgian brownness. Everything between the floor and the ceiling was dressed in the shades of the national flag and if a small stripe of white had managed to sneak its way in, it had been darkened by decades of the now prohibited smoking. It was just as somber as one would picture the foggy Low Countries. After all, this is the land of René Magritte, dark chocolate and where the name of one the country's most talented football players is directly translated too "Kevin the brown one". Amber, sepia, beige and chestnut. Brown, brown, brown. Belgium.

But as dimly as this may sound, Café Folklore was not dark or depressing. It was more idyllic and romantic. It was as if the Brothers Grimm had moved into the modern city and had become soft, like velvety Disney-delightful. Much like the gingerbread house in Hansel and Gretel but without the evil stepmother and the cannibalistic witch. Or put it this way; as we sat there watching the life pass by at this house dating back to 1667, my thoughts flew away to the brilliant renaissance artists of this region. Genre painters such as Jan Steen, David Teniers the Younger and Adriaen Brouwer too name a few, depicted in their amazing works the everyday life at jolly taverns, peasant festivities and social gatherings in a highly jovial way. Café Folklore reminded me of these paintings, although in a new and modern take. Those rose-red cheeks on the regulars in the bar, grinning as they poured another bottle of Trappist beer in their glass. The low folkish ceiling so typical of that time and the domestic flair of the two genuine inn-keepers. For all I know, I would not be surprised if a small house mouse would reside beneath the bench were we were sitting. It was that kind of world.

Homely might be a tired term to describe a cozy bar but at Café Folklore I could not find it more suiting. Gone were much of the distinction of private and public that is usually noticed at places of business. The owner Jaques was plodding in and out with groceries he had just bought at the store, seemingly both for the bar and for personal use. This seemed reasonable considering that he and his wife lived upstairs as well. This had Marina told me as she was organising the tables next to us for the weekly card game that their friends always came for on Saturday afternoons. Another testimony of how close this bar seemed to be to their private sphere, the way she spoke about their guests like friends coming over for a social gathering at this ground floor living room. I have later found out that when Jaques and Marina's kids still were living at home, the whole family used to take their dinners out in the café. Even though Belgium is officially a Roman Catholic country, for me this way of making domestic space speaks of a sort of "calvinistic transparency" where not much is hidden to the public and where the long tradition of dense urbanity has pushed for a strong public mentality. A fascinating thought on its own but also a very charming feature at a bar like this one.

As we enjoyed Café Folklore, life was coming back to us. Our excited eyes looked at each other as we got the exuberant Jaques to joke around with us for a while. He went on about him being the father to one of us as he had apparently got laid on a Swedish camping thirty years ago, exactly the year when we were born. Well, that's a solid act. Maybe we weren't the only lost cases in this world after all? As we left the bar, Marina came after us to let us know that they had a room for rent upstairs if we one day would come back to Gent. Sure, I thought too myself while I gave this beautiful world a smile. From sleeping in a convent cell to crashing upstairs of and old Belgian brown bar? Life is only getting better and better.

Drinks? Like many other Belgian beer cafés the list is long and filled with high-quality stuff. It is also the only "free bar" in Gent which means it is not owned by a particular brewery. In other words, only here can you drink both Jupiler, Stella Artois and De Koninck in the same house.

Munch? Unfortunately there was nothing of the sort when we visited. Was this because of Jaques grocery shopping? A little disappointment as I had heard about many great snacks being served here. First off, they usually do the complimentary bar eggs which is a tradition I really love. Secondly, Jaques has apparently been handled an unique recipe from an old lady many years ago which is supposed to be a real local specialty. It is called Kroakemandel and it is basically heavily salted peas that are deep-fried in oil and eaten from a cone. Sounds brilliant to me. Besides, this is also a house of sandwiches which people come for in the mornings. 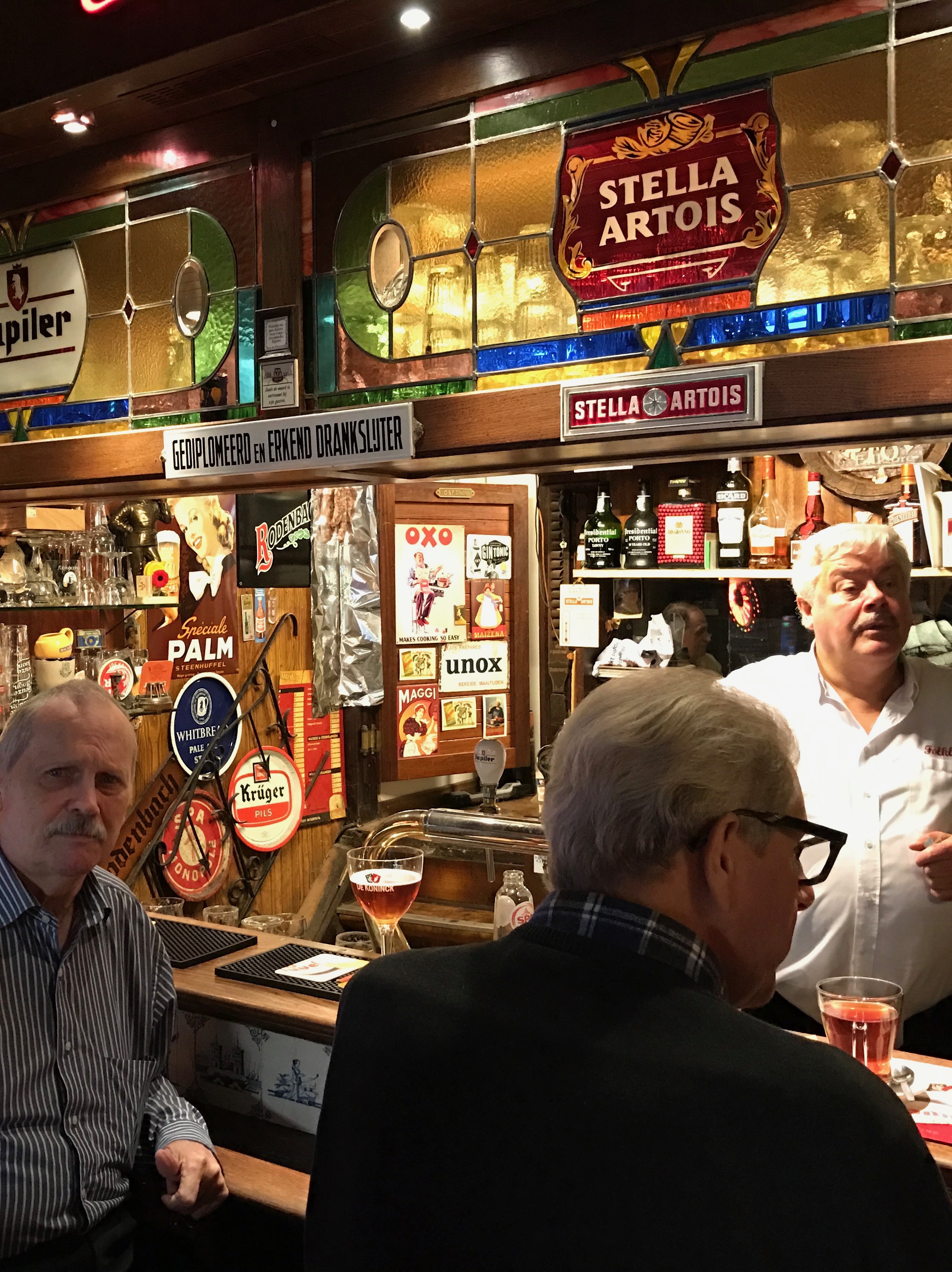