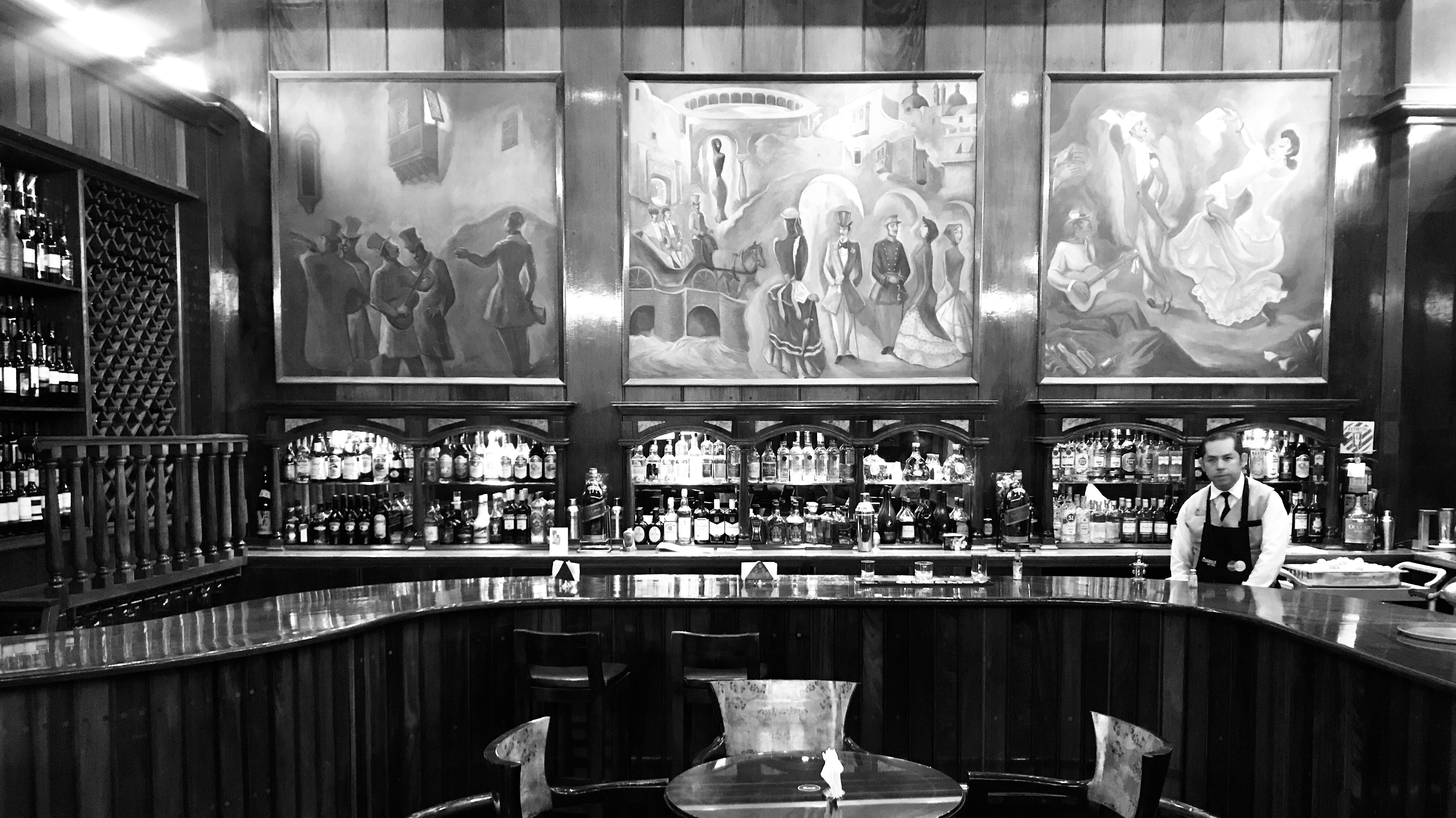 Cocktail trivia; the nerdification of connoisseur cool. For more than twenty years, tiki high-priest Jeff "Beachbum" Berry buried himself in libraries to decipher the lost mid-century recipes for booze mixed with tropical juice. Same goes for David Wondrich, perhaps the most noted cocktail buff out there, who has spent almost a lifetime tracing modern drinking culture back to the Jerry Thomas heyday and whose knowledge about mixology is as thick as the prolific beard he miraculously outsmarts every time a trad libation enters his mouth.

Both Berry and Wondrich have reached almost knighted status as cocktail scholars but behind them an immense following of various journalists, quasi-intellectual bartenders and hobby enthusiasts keep nurturing and dwelling a never ending curiosity about the history of drinks. They are indeed thirsty - both for knowledge and alcohol - and the reason for this may very well lie within the rare nature of mixology as a pseudo-scientific discipline. A foggy task from the start; this venture of documenting and analysing which types of concoctions that was shaken under the influence of things, but also an activity that may have a hard time of being taken seriously for what it really is. Because let us be frank; the world of cocktails is just too much fun to be placed anywhere near such important matters as quantum theory or Keynesian economics. And it is probably this urge of asserting itself as a study of recognised relevance that has made this global gathering of über-devout highbrows so ambitious in their task. They consume it all as they try to unfold the history of how to shake and to stir. Old recipe books become their bibles and apostles are made out of the old bartenders who created these classic drinks. Of course, so is the case with the bars where this drinkers’ history went down. They are the places of origin, Meccas of mixology so to speak.

But whereas sipping Bloody Marys at Harry’s in Paris is a required ritual on every cocktail pilgrim’s bucket list, this Peruvian bar seems a bit off. Where is that pompous atmosphere to be felt as when stepping into the exotic Raffles in Singapore or where is even that cold sense of mass-produced tourist horror as New Orleans staple Pat O’Briens cranks out another couple of hundred mistreated Hurricanes each day? At Bar Maury nothing of this. This dark lobby bar in Lima seems far from being celebrated by any of the cocktail worshipers out there as it lays hidden in solitude next to the foyer of the wistful downtown hotel with the same name. A rather gloomy existence, they both hold; the bar and the two-hundred year old hotel where it resides. The rooms can’t be anything but half-booked and even though this is a central hotel in the middle of a bustling pacific capital of ten million people, rude dogs are barking outside the desolated streets as if they were street raiders of a cruel mining town up in the cold Andean slopes. Indeed spooky. Indeed a bit off.

So was it really here that gloried cocktail history went down? Is this dark, sluggish and humid loner actually the location where a true classic was born? The Pisco Sour - that legendary shake of fermented grapes, tart lime, sweet sugar and frothy egg white - which is recognised as a national drink in both Chile and Peru and considered a true South American institution just like ceviche, carnaval and Simón Bolivar. Is this it? Well, no. It is actually not. But as the global cocktail community desperately seeks shrines and monuments where to give toast and to remember, this old bar will do just fine as a pragmatic compromise. It was after all at this place where local barman Mario Bruiget worked for a long time. He originally developed the Pisco Sour at Morris’ Bar, a popular place that was ran by an American businessman named Victor Vaughen Morris between 1916 and 1929, and as Bruiget later brought the Pisco Sour to Bar Maury the drink saw its definite rise to local fame.

Vaughen Morris, Bruiget and Bar Maury each play interesting roles in the history production around the Pisco Sour. The American bar proprietor first and foremost because he was for long wrongfully credited with inventing the drink. The son of a rich Mormon bishop from Salt Lake City who moved to Peru in order to work for the national railway system, the historical character of Vaughen Morris represents every adventurous ideal that any epic cocktail inventor with a little bit of self-respect ought to carry with him as he writes his name into the classic recipe books. It is fully explainable why he was given this false legacy considering that white, male westerners of colonial times always have had a tendency of snatching the historical spotlight from other less privileged social groups. However, this does not make it more true or accurate. Bruiget, on the other hand, had never been mentioned in this very article if it wasn't for the rigorous research made by Peruvian historian Guillermo Toro-Lira. The analysis he made of the comments left by guests in the registers at Morris’ Bar (the Tripadvisor of it’s time) helped him draw the conclusion that it was most certainly the unknown youngster Bruiget who had successively altered what we today know as the Pisco Sour during a longer period of working at Morris’ Bar during the twenties. This is the less fabled and glamourised version of how the drink came to life but also the most sober take on a piece of cocktail history as it went down.

Whereas the roles of Vaughen Morris and Bruiget illustrate the process of how cocktail historiography went from inebriate myths to meticulous attention to detail, Bar Maury plays another crucial part in the making of Pisco Sour as a classic drink. With both the other two long gone and Morris’ Bar as well, Bar Maury is the last direct connection to it all. It is where the origins of the Pisco Sour still appear in physical form and it is here that the cocktail has a real chance to be celebrated as the Peruvian institution it really is. Of course, since 2004 every first Saturday in February is officially acknowledged as Pisco Sour Day and the drink has, since 2007, also been declared as a cultural heritage of Peru. None of these government initiatives can however showcase the story of the drink as Bar Maury can. If not Bethlehem, this is at least Judea. If not Lumbini, this is still Nepal.

With this in mind, the big question needs to be popped. Why is it so god damn quiet in here and where are the hordes? Besides the random case of yawning European retirees who might pass through because the Inca tour company they are travelling with has squeezed in another pause of refreshments to keep their ageing adventurers alive, this bar seems as lonely as Melania Trump as she is secludedly killing time in the White House. And this is the beautiful thing. Bar Maury has yet to become a museum because it is still a forgotten temple stuck in time. Like Machu Picchu before it was known to the outside world, this hotel bar is a lost sanctuary just waiting to be explored. Patiently, it is biding its time and can for the moment do nothing else but to await for posterity to acknowledge its worth.

And this will eventually happen. The likes of David Wondrich, “Beachbum” Berry, Toro-Lira and even myself will see to that. By each sentence we write about Bar Maury, Bar Maury will also grow as a monument of time. It is fairly simple. This is after all how history is being made. And until then this is untouched soil, surrounded and hidden only by the urban jungle of Lima’s downtown. A tickling sensation for now, to be present at this cultural treasure that is still perceived as nothing more than a forgotten lobby bar. Personally, I know exactly what I would have plundered if being an immoral part of the first expedition to this temple site. I would have brought home those seventies’ retro bullfighting posters that are collecting dust outside the restrooms downstairs. Or, I would probably have had my eyes on the spectacular bar counter. It curls so pleasantly around the floor just like the famous waves that breaks against the dramatic Lima coast. And of course, I would have brought with me a small bottle to preserve some of that holy water that runs freely in here. It is potent, sour and good. Every man who drinks it lives another day. It is the Pisco Sour - directly descended from the source. 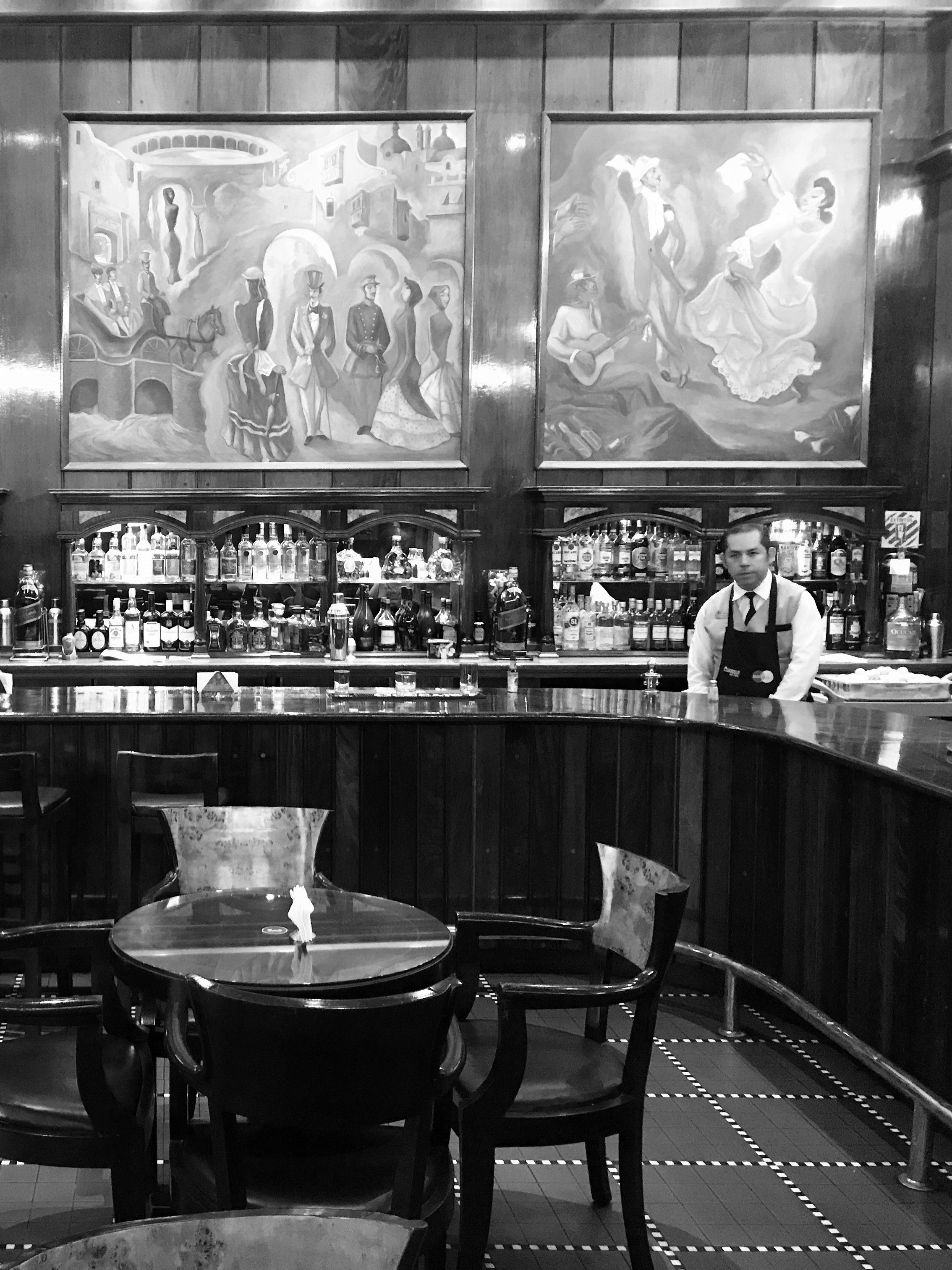