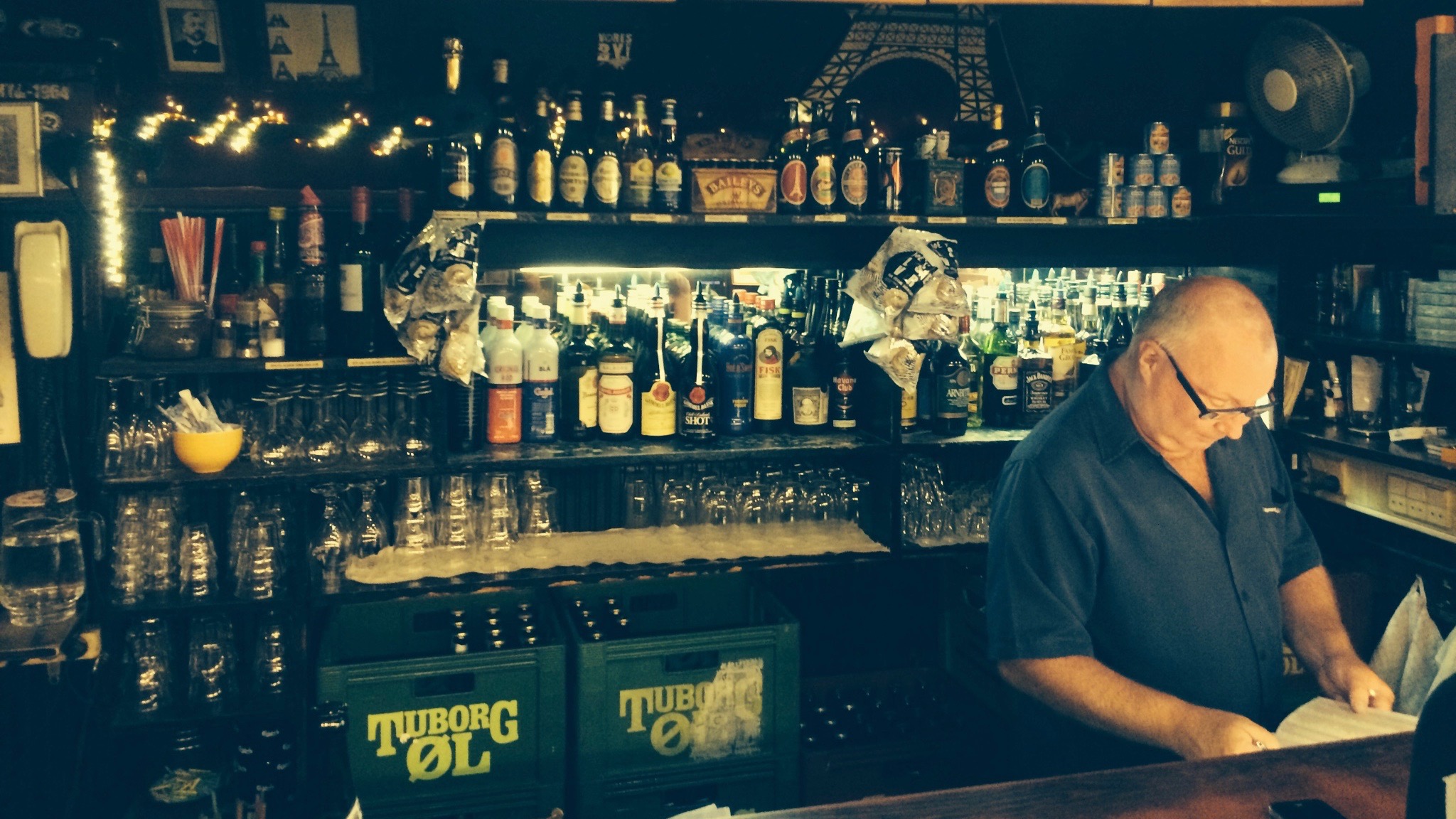 The dive bar capital in the world. If anyone disagrees and knows about a city where the cheap, grimy and decadent bars are more beautifully represented than in Copenhagen, let me know because in that case it ought to be something special.

I am not just talking about the high number of dives per capita, I'm also claiming that the bar culture around the Danish bodegas, as the dives in Denmark are commonly called, are totally unique to this world in terms of ambience, tradition and way of creating social space.

These superlatives are as well not coming from a patriotic Dane, it is the words from a neighbouring Swede that should be too busy with being bitter and envious of the great bar life that my own country doesn't posses. But I'm lucky because everyday I wake up with the fact that it is just a bridge away and that I can take part of this godsend city if I can just persuade the Mrs of my fatherly absence, usually lasting for two days as Danish hangovers are the worst kind.

So what is the deal with Copenhagen then? What makes it special among many other great dive cities? This is of course a matter of taste and I am aware that one of the reasons that I love it so much is because I got a deep and personal connection to this place. Years of good nights out has certainly had its impact on me. Nevertheless, I do firmly believe that there is no other place like this when it comes to diving around. In the next ten Copenhagen posts I will also speak for my case, as I will be stating the ten most important aspects of the dive scene in Copenhagen, convincing all of you of its greatness.

Let's start with one of the most characteristic and beloved features of many of the Danish bodegas. You are allowed to smoke here. According to Danish law, smoking in public is actually not allowed but there is a loophole saying that if you run a bar which is smaller than 40 square meters, then you can let your patrons fire it up. As many of the old bodegas are quite small, so do they manage to fit into this demand. But don't be surprised if you see smoking at bigger places as well. Danes has a sort of fuck you-attitude towards the 2007 smoking prohibition.

Naturally, all over the Danish capital people are smoking like chimneys at these places. Next to the bodega, the most common name for the Danish dive is actually brown bar, a term that describes how the former white walls and ceilings has been coloured brown during decades of ambitious cigarette smoking. As we will learn in future readings of this blog, this is a term that has its equivalent in many other countries, especially in north Europe. Some may find this disgusting but I would say that this is one of the key elements to what is so great about the Danish bodegas. And I do not say this because I'm the typical supporter of the right to smoke cigarettes in public. I am myself a non smoker. But when it comes to the brown bars I see two qualities in letting the air stay polluted. There is the questions of freedom and aesthetics.

The freedom bit is easy. In the health society of today where every little carb, wrinkle or enjoyable cancerogen is target for moral panic, there is something liberating in being part of these hedonistic nicotine orgies. It is like a beautiful acceptance of what we all know but never talk about. Death. Wow, did I really mentioned that? Regarding the question of aesthetics I will only ask you one thing; Casablanca with Humphrey Bogart standing at the bar without a smoke in his hand? Of course not. The cinematic effect of smoking indoors is crucial. At least at these old bars. It is also such an essential part of these places history that without it they would be lost. Without identity. And so would many of their clients be.

In the old working-class neighbourhood of Christianshavn, small boozy dens has always been supplying sailors, workers and whatnot cheap beer and liquor. Today the picturesque, Amsterdam-like quarter has become one of the most attractive areas in Copenhagen to reside and much has changed since the industrial peak. But around its small, dreamy canals there are still quite a few old joints left that brings the good old day to mind. My favourite place of these is easily Eiffel Bar, a chain-smoker's Eden. At times I have actually found it hard to endure the high ambition of the smokers in here but because of my dear affection of this place, I have always managed to cope with the fog.

Even though these premises has functioned as a tavern ever since 1736, what we today know as Eiffel Bar is of later origins. Around fifty years it has been running under this name and during this time not much has changed. The story says that the past owners had a vision of rebranding the old bodega to a Parisian café where the city's upperclass ladies would be welcomed with their poodles and grand hats to indulge on tea and cakes. As the influx of the privileged class still remained absent so did Eiffel Bar went back to its roots with bearded sailors drinking cheap beer, only now they did it alongside the many statues and pictures of the French capital city. A French-Danish child was born and since then this hybrid has grown up to be one of the most original spots where to go for a drink in this city.

There are two sides of Eiffel Bar and I love them both. During the daytime this is a sleepy and gloomy affair where the sunshine barely succeeds to break through the old, coloured window glass. Isolated from the world outside, the pace is slow and the crowd is scarce. But it is not empty as in abandoned or depressing, it is just there with a mellow and serene take to it. It is romantic. It is very much timeless. Cigarette smoke swirling up from the ashtrays. Old fat Danish men with a bottle of beer in one hand and a cane in the other. At lucky occasions you can even spot the rare sea dog, coming in for a drink or just to share a tall tale from the old days. However, at night it can be booming. A younger crowd blends in with the older regulars from around the neighbourhood and a big smelly concoction of smoke, sweat and spilled beer transforms the whole thing to an intense and drunken bash. People are throwing dice, playing drinking games and are hassling the lady in the bar to play their latest techno tune. It gets packed quite fast and once getting a seat at one of the elegant, black leather booths people tend to stay for a long time of drunken fun. Closing is at three o'clock and then you'll have to find your drink elsewhere until they open up again at nine in the morning.

Drinks? Traditional Danish beer on bottle. Preferably the Hancock from south Denmark with the Eiffel Bar logo on it. It is probably the best beer logo in the world.

Munch? This is a Danish brown bar, they usually don't serve food at these places. But at special occasions there is something to eat. On Christmas eve there is food for the regulars and you can also get an Irish stew when it is Saint Patrick's day.