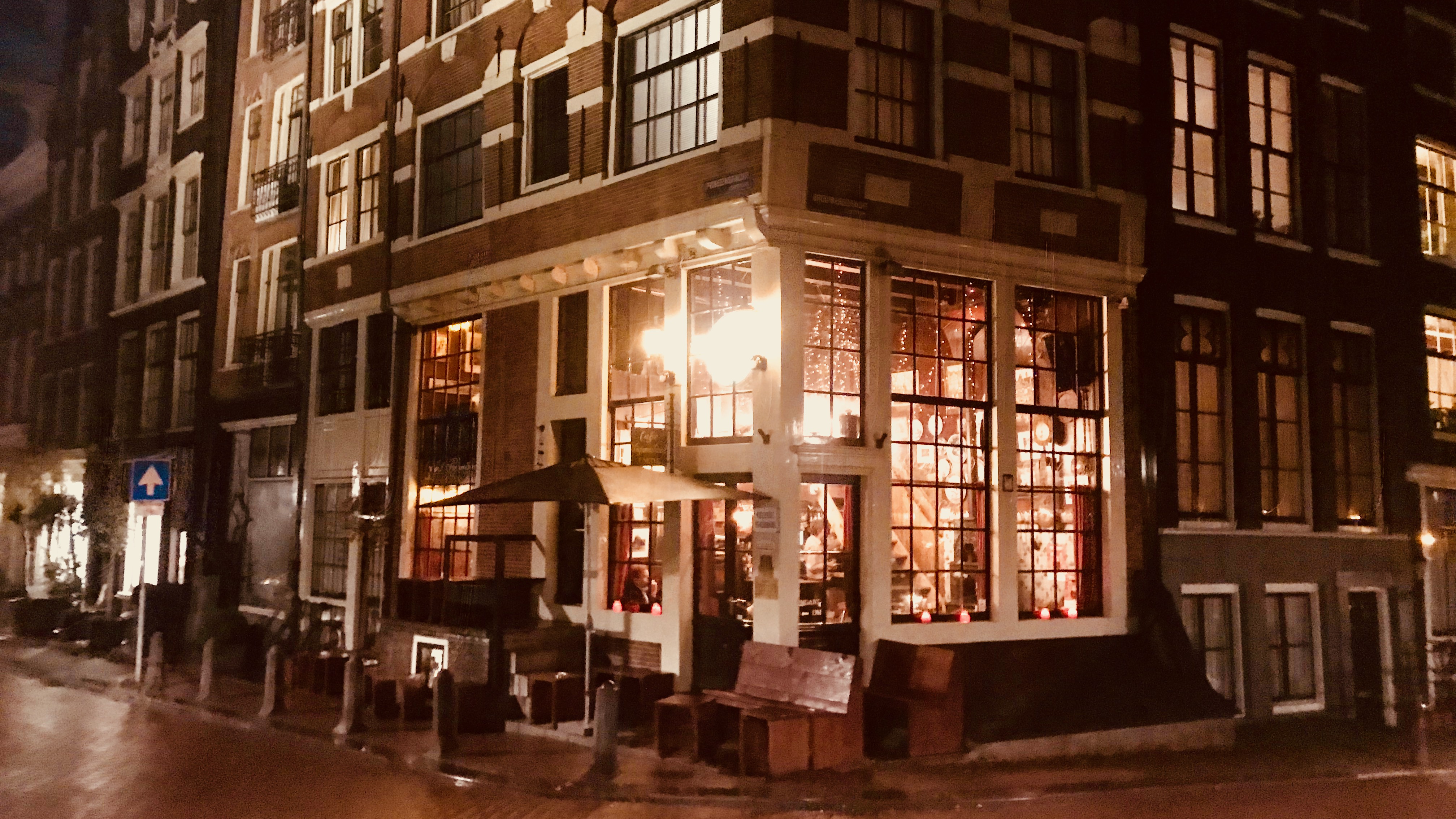 As I left Café Chris that night I was sure that I was going to stumble upon Julius somewhere in the alley. It would have been as odd as this life in being, as peculiar as this city of misty canals. However, I never did. Average life doesn't usually come around that way and my poor existence is nothing of an exception. I just live, breath and die.

I was however not aware of this coarse reality as I strolled down Prinsengracht, happily romanticising life down the canal while sucking on a big cone of Dutch delight. The emblematic ringings of the constantly present bell tower of Westerkerk was like sweet music in the December frost and even though I clearly was in need of something thicker than my black leather jacket, this dreamy city gave me enough warmth to not despair. I felt happy and passionately devoted to the conviction that had got my mind carried away just minutes ago at Café Chris; the idea of the transnational affinity within the brown bar culture of Northern Europe.

After two short but exhilarating detours at the almost daunting T' Smalle and the bohemian Café De Prins, I finally finished my northbound expedition at the iconic Café Papeneiland. Being the utmost example of how a buoyant postcard from Amsterdam can take shape, I knew that this cute little beer café had been on sightseer's maps for a long while now. I also knew that Bill Clinton had been here munching on their famous apple pie once, an always alarming sign of the state of authenticity a bar may be in. Kids, when the president of The United States has been around a bar shaking hands with the masses of mortals, that's when you know its over.

Still, ever since learning about this bar I had seen its potential. It was old, it had a great story and architecturally it was the pièce de résistance of all of Amsterdam's brown cafés. Dated from 1642, it was allegedly opened by a shrewd coffin maker who saw profit to be made by charging the mourning families of the dead for the complimentary drinks that he served them when they came to get a last glimpse of their loved ones. He eventually realised that the sales of liquor was more lucrative than making coffins so he ended up turning the whole company to a full dedicated bar. A priceless story and one for the books, much like another legend taking place here. Papeneiland, translated to the Papist's Island in dutch, was back then connected to a hidden Catholic Church by an underground tunnel. This was because that even though catholics were tolerated at the time, their churches were forbidden to have any outward appearance. To reach their secret sanctuary, the followers used a hidden door inside Café Papeneiland that took them down to the tunnel.

With this prior knowledge, I entered the premises and went straight up to the small bar counter that was squeezed in under a staircase in the furthest corner. By the jovial barman I was directly served a beer and I took my time, as I always do, and tried to get an overview of the place. It was indeed what every far corner of the kingdom had rumoured it to be. It was a snug little space with adorable features such as a central cast iron stove standing in front of a wall filled with antique white-blue tiles and dinner plates from the famed pottery town of Delft. My thoughts floated away to the Dutch countryside, much like it was depicted in Marleen Gorris' Academy Award winner Antonia's Line, an epic feminist drama my mother forced me to watch when being a little kid back in the nineties. Oh, how I never thought I would be able to extract anything of value out of that dreadful night.

But it wasn't all tulips and windmills. Café Papeneiland was after all a child of the capital, a cosmopolitan offspring. The high ceilings were of the kind that encourage grand thoughts and tolerant dialogues like only a big city could provide and the impressing chandelier, hanging over the round wooden tables, spoke a language of prose being written and deals being sealed. It is beneath a roof like this that the world comes about. And being in Amsterdam, a city of never-ending influx of capital and trade, this notion could but only make sense. I observed the big group of international business men that were merrily clamouring to each other at a table beside me. In one way they were nothing but servants of a neoliberal system where Amsterdam is today booming as a hub of business investment. In another way they had always been here, ever since the Dutch East India Company made this to the richest city in the world.

These two sensations, city vs countryside, puzzled my mind as my eyes got lost in the fire of a candle being placed on the bar counter. I was by this stage a drunk man and therefore eager to jump to rash conclusions about this crazy world we are thrown into. The most urgent quandary of irrelevance? Brown bars, of course. As I looked into the eye of the fire, I started to think about hygge - the Danish buzzword that can be rashly defined as cozying up with each other, playing board games and lighting up a fireplace. This nordic take on joie de vivre has internationally become an in vogue term the recent years and it is something that is most often being performed at home or in dark, homey cafés and bars. Much like this bar. Much like a brown bar. Most interestingly there is a less hyped Dutch equivalent of this term; gezelligheid. It is actually the exact thing. The Danish likes to get together, light a candle and cuddle up in warm settings like Café Papeneiland. And here I am, staring into a candle while smelling the hot apple pie being plated and listening to a sorl of intimate and devoted conversations. It is Gezzeligheid. It is Hygge. It's all the same.

When I came to think about it; Copenhagen does resemble this city a lot. Old canals filled with history of maritime commerce. A liberal take on cannabis and an always present risk of being run over by the fanatic fleet of bicyclists. Not for nothing, things seemed to be connected. Maybe it was just straight obvious or just a case of irrelevant coincidences. But are there anything such when discussing matters of genealogy? I thought not. Instead I thought of Cornelis Wreeswijk, the Swedish national icon of a troubadour. Recognised as one of our country's greatest songwriters and as an unquestioned part of Swedish cultural heritage, he was actually Dutch and so have many other influential people in Swedish history been before him. Sweden's second city Gothenburg was, to draw an illustrative example, from the beginning formed as a Dutch colony and was initially planned and designed with inspiration from other Dutch cities such as Amsterdam and Batavia (Jakarta).

So we are all being Dutch now? Not really. But a striking clarity took hold of me as I encountered this small piece of Holland. It convinced me of a couple of conspicuous things. That there is a kinship out there that encircles both the Swede in me and this place. It is what the world, from the Scottish Highlands to the fjords of Norway, think of as the Germanic speaking cultures. Outside a nationalist frame but still through the obscurity that follows the global mishmash of westernisation, this interrelationship really exists and while standing at the bar at Café Papeneiland this sense of connection stumbled upon me as quite evident. Further on, this city appeared more and more as the epicentre of that world. Evidently so by looking at a map but also linguistically as Dutch is roughly in between the region's two giants of language; English and German. And as I reflected on my own area of expertise, that is the world of bars, I also thought of this resemblance. The traditional Dutch bruin café was as much a cousin of the British pub as it was to the German type of bars called kneipes. But to speak of it as a squeezed-in hybrid or an overlapping middle way seemed far from accurate and fair. Especially from where I was standing. Having spent the night at Café Chris and Café Papeneiland - both impressive artefacts of the 17th century - it was unavoidable to look upon the matter without respect to the Dutch Golden Age. A part from teaching the world to build cities, paint masterpieces of art and dominate world trade - what else could be seen as the long-lasting legacies of this golden era? Maybe bars like these. Maybe is the bar culture as we know it around north of Europe much descendant from that age and from this city? Amsterdam - the center of attention. I am tempted to believe so.

Drinks? Small glasses of Amstel at night. But being open from ten o'clock in the morning this is also a place to go for your morning coffee.

Munch? It has been mentioned and it has been savoured. Café Papeneiland's apple pie is as legit as it is talked about. 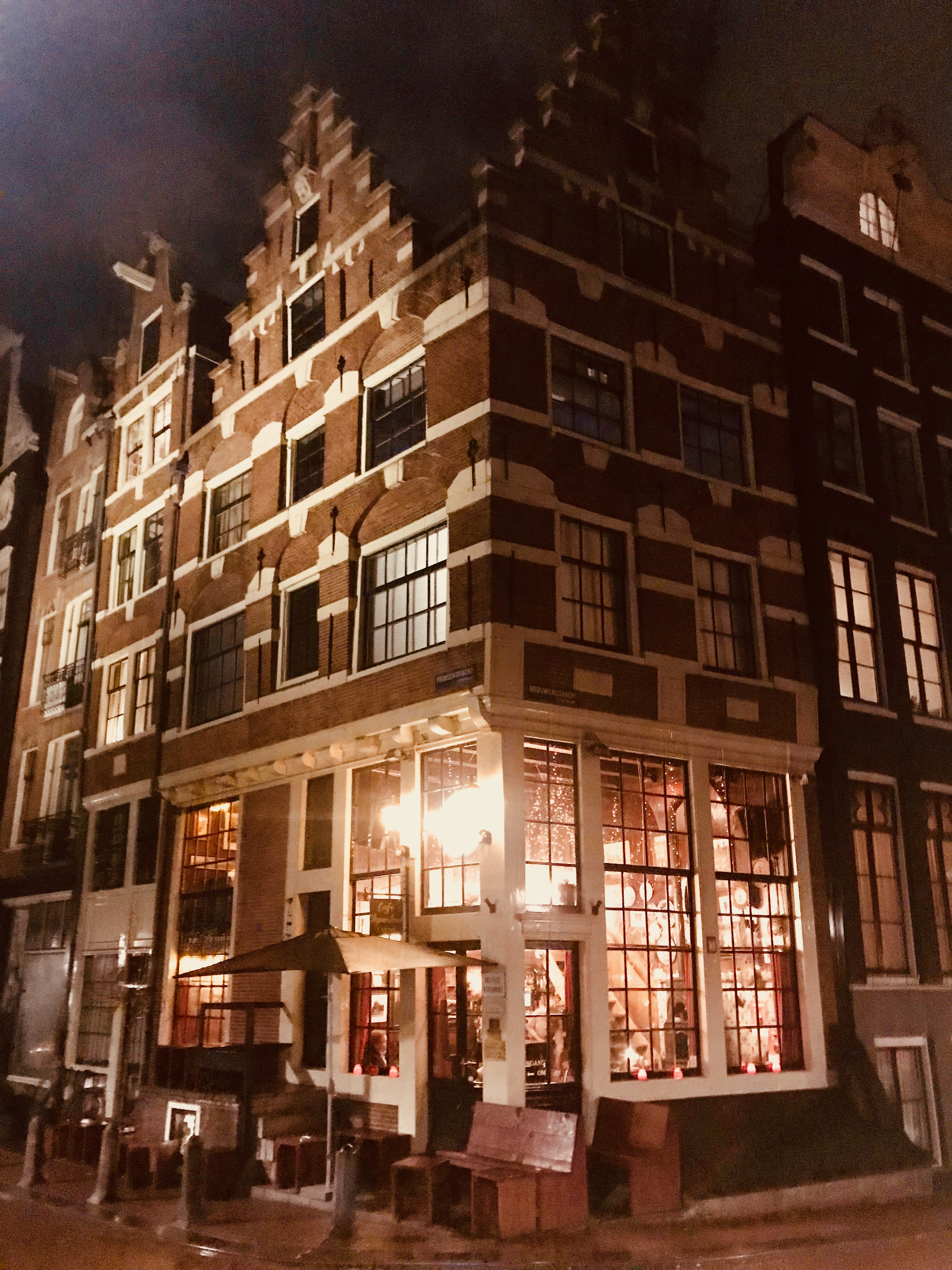 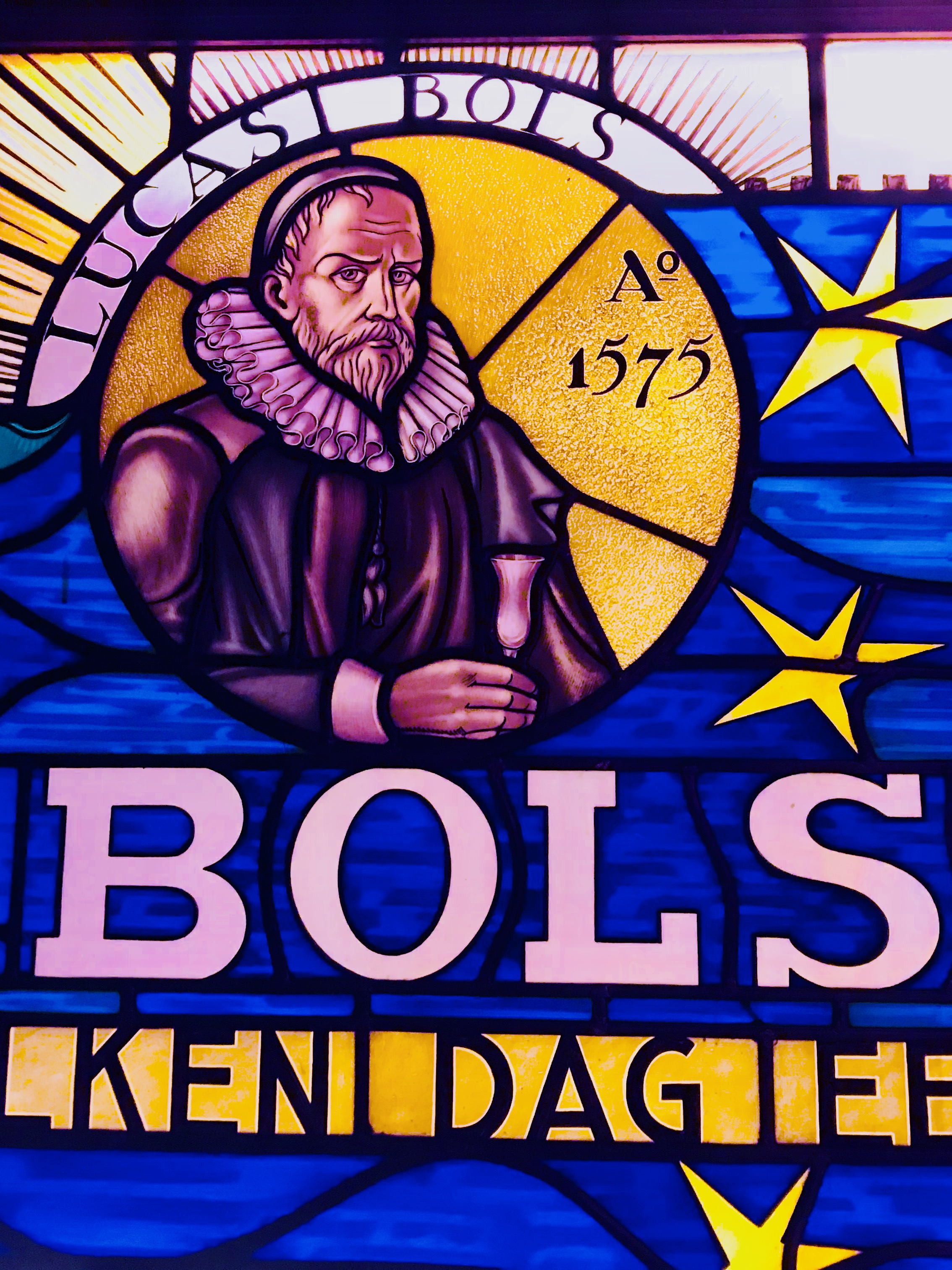