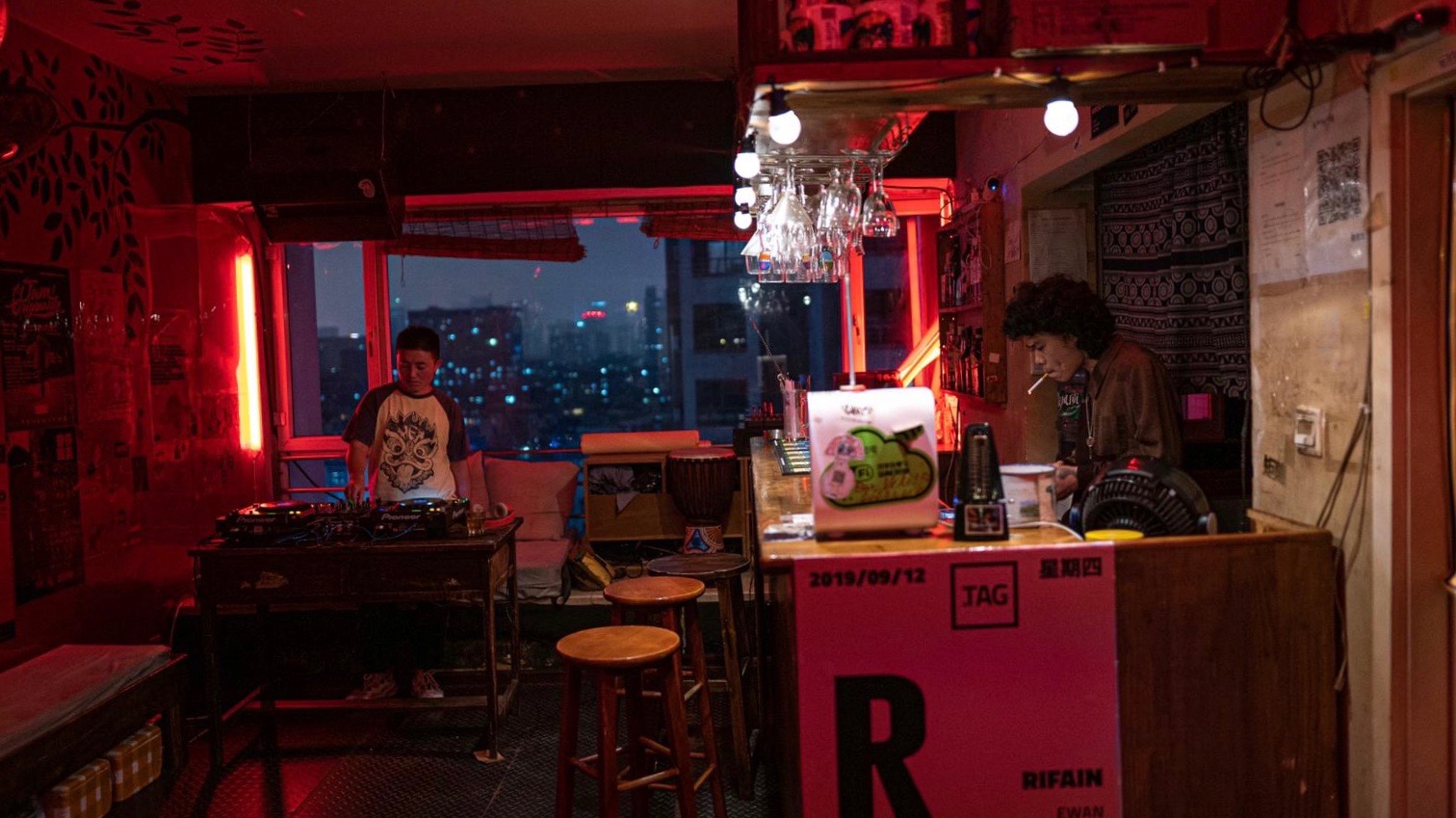 As if an orgie banging bus of Deadheads is running me over, my head is aching of hedonistic relief. My eyes are closed and the healing heights of nitrous oxide explode like a firework in my brain. I fall deep into laughter, the mad and insightful type of laugher that anyone who really likes to laugh enjoys the most. Ten seconds later it is all over and I am back on the rooftop bar called Hakka Homes.

Just like the Affleck brothers straight out of rehab, I head directly back to the source. The young bartender who doesn't speak any english at all, fills up another round of balloons before he also pours me five devious highballs of the house drink; a very potent home-brew spiked with baiju, China’s national hooch. The young man has got a captivating look. It is almost enviable. With the long wavy black hair hanging over him, the bold tattoos and the defiantly loose silk shirt with a long necklace hanging around it, the complimentary designation “urban pirate of the 21st century” may best describe his ways. Carelessly and perhaps a bit bored, he is smoking cheap domestic cigarettes while gazing at his partner for the night; a casually dressed DJ playing music both beautiful and weird. Quite brilliantly he switches the song to Sun Ra’s masterpiece from the seventies, “Space Is The Place”, and as I return to my party fully loaded with more fun I can’t do anything but agree.

I inhale the mad laughing gas once again and I let my thoughts drift away across a sea of impressions that appear as both unexpected and absurd. The great enigma of China - I never thought that it would be unveiled this way. What ever happened to that classic commie cliché of avid party members in straw hats quickly cruising down crowded bicycle lanes on their way to small smoky gambling dens? Or those post-Xiaoping ruthless business tycoons sipping two-hundred dollars of worth of imported brandy by the glass while contemplating on the world domination that they are about to execute? No, no. Up in here both of these perverted stereotypes appear as absent as freedom of speech. Just like those seven year old Chinese piano prodigies I once saw in a documentary about China playing Tchaikovsky in reverse. They are all myths, nothing but fabricated preconceptions of our minds. It makes me smile a bit as I now remember what should always be remembered the most. Reality can never be just a formula. Space is the place.

Once back on earth I look around the curious clique of people I am with. A manifold crowd, to say the least. Beside the eccentric expedition of five Sichuan pepper sourcing importers that I count myself belonging to, our assembly for the night is made up by an obnoxious Chinese rapper, an introvert designer from Madrid who makes bizarre concert costumes for Lady Gaga and a bar owner who has got one business in Paris and another one in Chengdu. It is his rooftop bar we are in and it is about his city most of our discussions revolve. And how could they not? Being a Chinese cultural-historical treasure that only a couple of decades ago was known as a pastoral provincial fairytale but today is booming to be one of the biggest urban agglomerations on earth, there is a thing or two to say about the human phenomenon called Chengdu. It is spicy, lazy, chaotic and crazy all in one time. Beautiful, ugly, fresh and polluted as well. It is a weird place. I would like to add that it is magically weird. And it has got flavour. More flavour than most.

As a kind colleague passes me another balloon, I once again diverge into the fast-track euphoric tunnel of hippy crack and I bury my head in my arms while purring like a kitten in a bathtub filled with heavy cream. Oh wise Confucius, this is good. Like a forty-niner from Klondike just back to the San Fran opium-den with a pocket full of gold, I could lay here for weeks just dreaming about this wonderful world. Daffodils, spaceships and my mother’s ravishing rhubarb pie. What an adventurous pleasure it is to be alive! And to be where I momentarily am. Seldom have I encountered a mind-boggling city like this before. Chengdu seems to contain an almost awkward sense of staying playful and out of this world, a childish quality that I can only recall from such larger-than-life destinations like Varanasi and New Orleans. It is really one of a kind. I manically grin at the colourful montage that is swooshing by like a L.A freeway in my head. It is a mad symphony of visual signs. Neon street lights. Sub-tropical rains. Bubbling hot-pots filled with chile peppers, kidneys and brains. I see bamboo falsework supporting futuristic building sites. I see old men playing cards by the rivers on hot summer nights. I see the New Century Global Centre which is something of a mall. It is the largest freestanding building in the world but only one hundred meters tall. All of these images makes me think about space. From where I am closing my eyes, it definitely seems like the place.

This euphoric gassing got me returning to the mortal world with an unmatchable excitement of being alive and while my motley company continues to break down the countless convincing reasons why Chengdu is so much more of a relevant metropole than boring Beijing, I decide to wander around the small premises of Hakka Homes. Lurking around the terrace while snapping photos of the crowds, the decorated walls around them and every engaging detail in between, I notice that this is certainly not the most exclusive, grandest or scenic roof top in the world. In fact, it is nothing else than a hotel apartment, converted into a bar. I ask myself if any persecuting Chinese government even knows about this hidden place. Maybe they do, maybe they don’t. What I do know is that until an hour ago this seasoned bar fiend didn’t have a clue about this place and in his book that deserves a star. Speaking of which, in the foggy pollution referred to as the Chengdu sky there are no stars to be seen. Just a grand mass of man-made lights, fuelled by far away power plants. In millions, they keep shining on each other as they are being consumed by endless human needs. Tellus, this estranged old world we tend to call our home. It never stops to surprise. The other day I even heard that they are planning to build an artificial moon over Chengdu. How crazy is that?It is supposed to bear a reflective coating to cast sunlight back to Earth, where it will supplement streetlights at night. We stand in awe.

Eventually night turns to morning and my friends decide to leave but before I follow them to the unassuming elevator that will bring us back down to Chengdu’s pulsating streets, I return to urban pirate for a last hit. Just one more, man. That is all I ask. If not one for the road, then one for the clouds. I breath in while I rest my legs at a wooden bar stool and I feel great because I can now feel my consciousness as it is gliding above terra firma like a wingless dragon that is both happy and tamed. I eventually open my eyes and there it all emerges in front of me. Through the big bar window; a man-made moon. Holy crap. It is hanging above that blade running spectacle of million lights. From far away power plants, consumed by endless human needs. I sigh in chemical revere. What a ridiculously adventurous pleasure it is to be alive. I am telling you; space is the place! 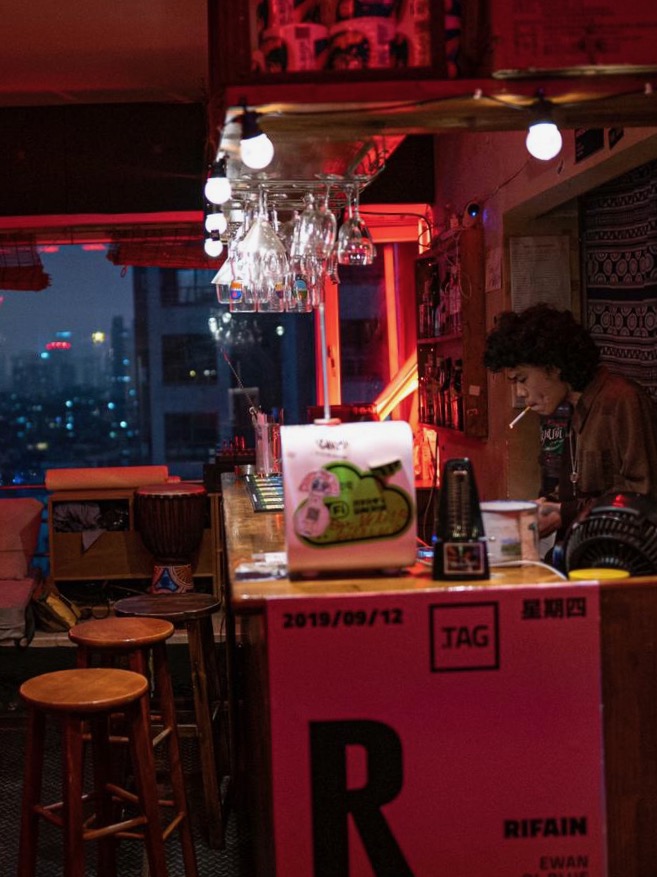