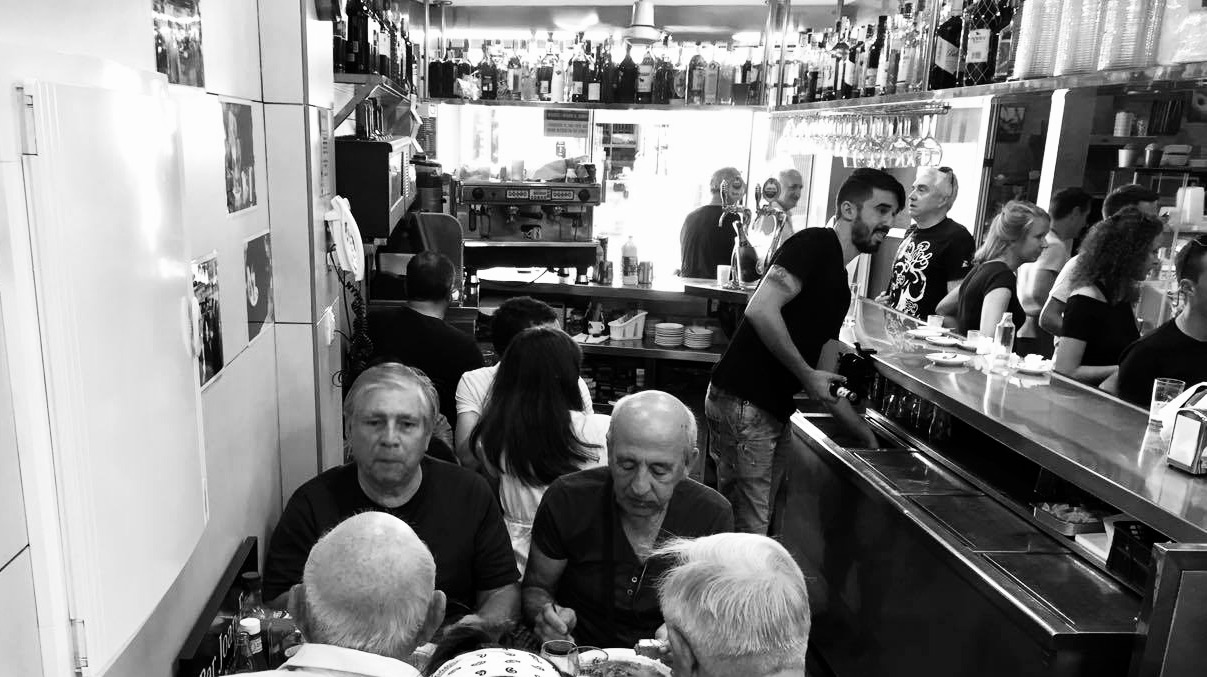 Plot. No insider coverage has ever been more within than this one. If something, this is something that I proclaim. Ross Kemp as he is hanging out with MS13 in El Salvador? They are just sipping tea. The media fleet being let in for John and Yoko’s famous wedding Bed-in? Nothing more than an well-intentioned but orchestrated promo-snuggle for peace. And do not get me started about building a supernatural portal into John Malkovich’ bald head because what I have for you is a step further to the core of things. I am giving you free passage inside one of the most acknowledged bars where to eat honest and good on  the renaissance island of Mallorca. That’s the scoop. And I don't even know anyone in this place. Not the owner, the cook or someone’s grandmother who keeps the whole tradition alive. Because the beauty of this bar is that small detail; that practical aspect of space. You drink and eat inside the bar. Transparent like that. Not like any of those ‘chef’s table’ rip-offs where team-building groups of people are squeezed in the back of a Michelin kitchen to prepare their own expensive food. No, the tables within this market hall bar is basically just a necessary solution to fit the crowds but the outcome is free of constraints and blurs out the distance between proprietor and guest. It makes the ideal encounter of them two. It is life from within.

Trivia. Bar Joan Frau is located inside Mercat de Santa Catalina, the oldest market hall in Palma, being founded in 1904. About market halls. Today, it seems as Eataly has more worldwide followers than the catholic church and everywhere we travel in our insipid trails of culinary gluttony and greed, we tend to end up at these places, both newly conceptualised and classic ones. But do we really know why classic market halls like Mercat de Santa Catalina first became to exist? Why do every Western city with a little bit of self-respect contain one of them within its realms? Bacteriology. That’s where to look. During the mid-19th century, discoveries by Louis Pasteur and Robert Koch significantly influenced the development of knowledge on hygiene, which had a direct impact on the modernisation of food-selling facilities in burgeoning modern cities of continental Europe. Gone became the uncontrolled and open markets of pre-industrial style, only to give way to big “iron-umbrellas” with high ceilings where ventilated air could run free without spreading bacteria and disease. Finishing materials for floors (clinker), walls (tile) and sales counters (stone slabs) were established, all of them elements that could easily be kept clean which was of outmost necessity as city populations rapidly became bigger and needed to get supplied with more food products from the countryside. These “bellies of the city”, as Emile Zola called them at the time, has since become natural elements of modern urban life and although many of them have disappeared, the remaining ones are now finding their place in the sun during these times of possessed gastronauts who plagued by a detrimental extent of freedom of choice seem incapable of choosing only one place to eat at a time.

Superlatives. Honk the hell out of your Seat 600 if you like old Spanish mercado bars. Like guarding archangels and nurturing mothers, they promise to stand by your side through that decadent shopping spree. They may be the rewarding final stop; a place where to rest your head with a couple of vermús too many while your freshly bought shrimps slowly goes bad in that plastic bag. Honestly, I couldn't care less if they do. Or is the market bar more of a point of departure? Where overconfident dinner visions are being made over small glasses of inspirational Mahou? ¿Te sirvo otra caña? Please do. And may I order a plate of your famous Frito Mallorquin? I know that the Frau family makes one of the best that this island has ever seen. Livers, hearts, kidneys. All chopped up in a magical comfort blend. Oh, how I wish that afternoons at market bars like this one would never end.

Bar Joan Frau got me poetic there for a while. I guess this is what a small box with a steel counter in a big hall will do to you. In a way it is strange. For the untrained eye, this bar does not carry much to remember, neither to write about. The big black signboard sponsored by Amstel that circles the bar is on a good day informative but on any other both faceless and bland. So it goes for the cheap white tiles on the bar front, which curiously once replaced a set of retro beauties with edgings decorated with leaves. Perhaps not for the average ignorant schmuck without the admiration for how brown the seventies really could be, but anyway something warmer than the sterile state of white that encircles the bar today. But these are only minor details, irrelevant flaws when seen from the inside. Here we are all happy as clams, whatever that means. We are enjoying family recipes that have been on the menu since 1966. Lamb shoulders, paellas, stuffed eggplants, pa amb oli and mallorquin snails. The good life. La cocina sencilla. It is what we call life from within.
Where? Bar Joan Frau, Plaça de la Navegació, 07013 Palma, Illes Balears, Spain. 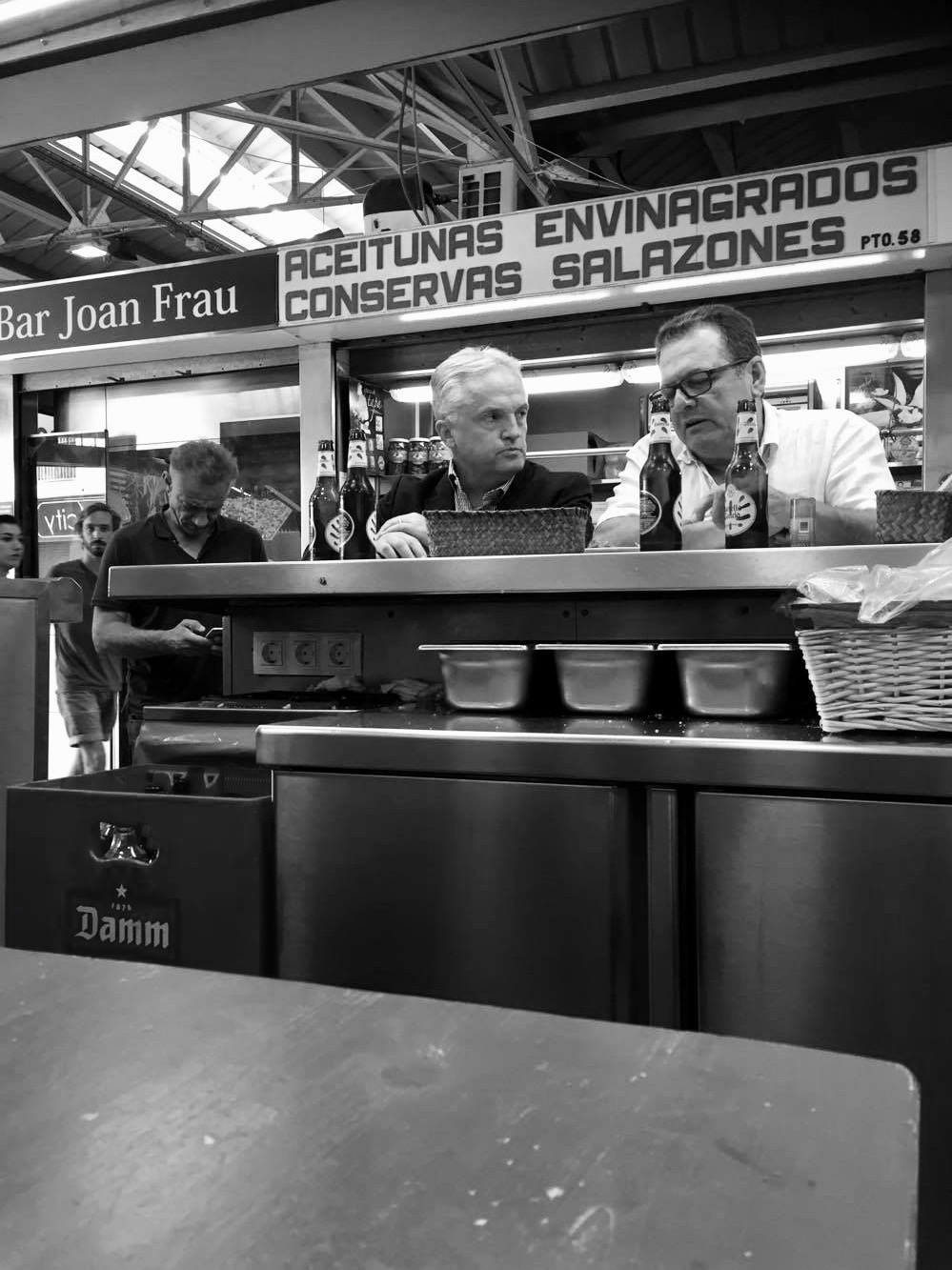