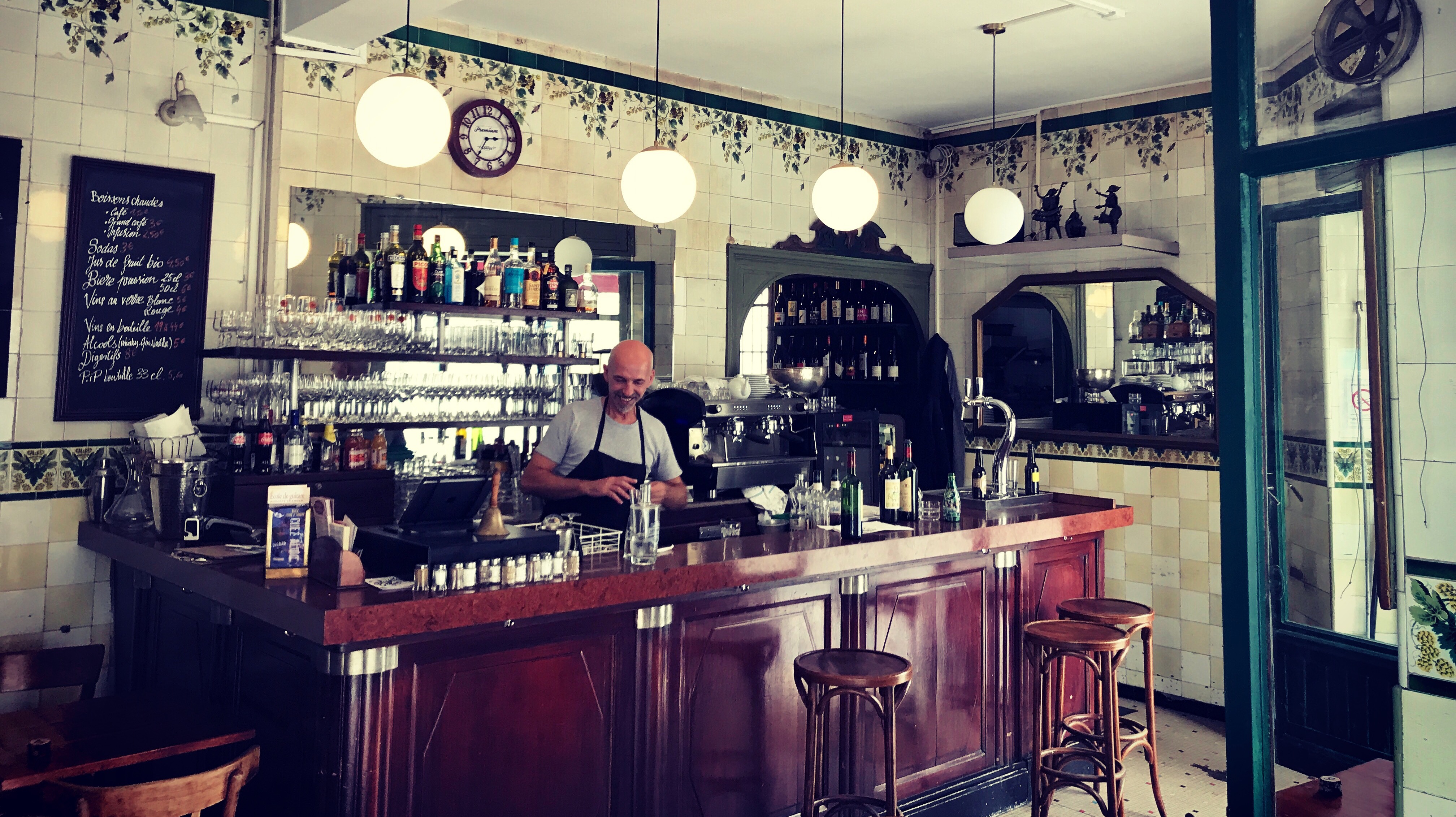 Can turning fifty really be something to raise your glass for? I think not. A festive denial of the inevitable end. That’s what it is. And it reeks of crashed marriages, unachieved career goals and lame dinner stories that should have been discarded many years ago. All in all, celebrating fifty should be avoided at all times.

The same goes for the semicentennial milestone of this blog. It is really nothing to get stirred up about. What was once an overambitious vision of mapping out the one thousand most interesting places around the world where to have a decent drink is freaking five years later a sad fifty chronicle long bad conscience of a writing process that appears as more slow-going than the current Covid-19 vaccination plan in Sub-Saharan Africa. And as with a dead Russian dog drifting in outer space, no one really seems to care. This literary oblivion would actually be okay, if only there were some signs of moving forward or at least one godforsaken article where it didn’t take me at least a month to just open up a new Pages document. My main problem is; I got ninety-nine bars but the article ain’t one. Thus looking out from this hilltop of unpaid bills and changed diapers where I am on, something needs to change. Dramatically so.

So I am proposing a new take. A fresh model that will breath life into this inpatient writing project but something that will also pave way for a hefty flora of bar narratives that deserve to be told. Because if there is anything that I can actually blow my own trumpet about, then it is the assemblage of bar encounters that me and my loyal liver lackey have had over the years. From China to Brazil, we have been through a decent number until this day. And in writing or not, we will never stop. We just won’t. Thus the new formula, one I will explain exemplified. Seen through a Bordeaux wine bar, here are the three golden paragraphs.

‍Plot. Each bar article needs to departure from a dramaturgical point of view. Most naturally, bars always do in a way. I have been ranting about this so many times before but with all the unjustified respect I hold towards sterile office landscapes and demoralising hospitals venues (both curiously popular for writing successful storylines by the way), bars are really the perfect scenes of everyday life. They just seem to attract stories, legends and tales like nothing else and this they do in varied ways. As for Le Bistrot du Docteur Grégoire in Bordeaux, a cute natural wine bar in the northern city neighbourhood Quartier des Chartrons, a storytelling like this could naturally be centred around the lifespan of the bar itself. It is clearly an old bar and once while under another name probably a bit neglected as well. Lately it has been through some kind of metamorphosis where artsy bottles of biodynamic wine has seized the bar counter and where eclectic plates of gastro discovery are being shipped out from the kitchen side. Call it a renaissance, a class betrayal or whatever you want, still a story about it is there to be told. So is the case if one would want to play the contextualisation angle on this bar instead. Bordeaux; perhaps the most famous and conventionally cemented wine region in the world and here is a small, stubborn watering hole that is operating totally against the grain, pushing bobo wines that are from anywhere than here. Now that’s one for the books.

But perhaps the personal encounter makes the most sensible twist? A steaming hot Monday noon in July 2018. An entire republic of seventy million inhabitants appears to have an axe stuck between its two cerebral halves. A victorious hangover thickens the dense air of these summer streets. An intoxicated winner beside our table orders a croque with extra cheese while another one passes the terrace as he is hailing “France, champion du monde!”.

‍Trivia. At Bar Basso, how did the Negroni Sbagliato really became a thing? Did you know that The Hawks once played at a Texas nightclub owned by Jack Ruby? And have you heard the story about when Keith Richards downed nine beers at a Dartford pub before going home to snort up the ashes of another family member of his? Trivia. Curiosities. Random irrelevant information about the world. Bars seem to attract these weird pieces of knowledge like a bottle of banana liqueur draws a crowd of flies. And this is basically why this website exists. To capture and expose phenomenons that honestly need to have quite little to do with bar culture over all but when seen from the bar counter’s perspective, they take on a different meaning and raison d’être. Just observe the potential approaches on Le Bistrot du Docteur Grégoire. There is the vintage wall tiles surrounding the room. Beautiful I must say but first and foremost the perfect entry point into the world of ceramic craftsmanship which is something every walking soul should at least once in their life get deep into. And what is really the history of such a concept like ‘table d’hôte’? This seems like a relevant topic to take on as one devours the house ‘salade avec rillette d’oie* which is then followed by the classic butcher steak and then dessert.

But most principal of a query must be the name it self. Le Bistrot du Docteur Grégoire? What is the reason for this spun-out title of a bar? And who is this doctor anyway? Alors, apparently Docteur Grégoire only exists in the world of the 19th century chansonnier Gustave Naudad who wrote over three hundred songs before dying in poverty in 1893. One of these was in fact titled after this make-believe physician who, if my poor french efforts from high-school do not embarrass me once again, was wise enough to treat his patients only with wine which by a weird parallel actually gives him the same beautiful purpose as the man behind this hipster bar counter in Bordeaux that in his honour shares his name. Suddenly everything seems quite clear, doesn't it? And consequently, we learned something about France as well.

‍Superlatives. The most disturbing aspect of listing the world’s most magnificent drinking dens is that each bar depicted always tends to turn out to a long smooth-talking orgie of words. It makes a sick parade of flattery and soft soap superlatives. No wonder really since I am myself probably the most deranged bar buff out there and I do get unpleasantly turned on by a bar experience that hits all the high notes. Especially under the influence of things. It is hard to not get carried away and even if one could have controlled one’s enthusiasm this wouldn’t be right. It is not the daily Nasdaq updates we are discussing or your grandmother’s crooked crotch. These are places of grandeur, excitement and everything that we wish for in life. How can we depict them in a lukewarm state of mind? Probably, we should not which leads us to the truth. Bars should be accounted in an excessive fashion and nothing else. I dare to quote Swedish heavy metal guitar player and unaware truth sayer Yngwie Malmsteen: “How can less be more? More is more!”.

So ultimately, here is a bit more of the more when it comes to Le Bistrot du Docteur Grégoire. A quite sensational place, if you ask me. I have already mentioned the tiles but I will do it again because they were never really created to escape my mind from the beginning of it all. Handmade in dreamy green and with the motifs of plants of hops, these are wall tiles which are meant to inspire any dull existence into a life-affirming frame of mind. Or just to drink more wine. Très sympa! Just like the happy barman who was genuinely too nice and modest to be French. What was wrong with him? However, there is nothing wrong with the back room of this place, basically left on its own during the hot summer terrace reign. Here one can ease back a bit and forget about life for a while. It is annoyingly well executed, the interior of this room. If it wasn’t for the small bluetooth Marshall amplifier revealing the technology of today, this replicated space of yesterday would probably even convince the doctor himself as well. I imagine it as a wine merchant’s dining hall back in who knows when. You know those days when families were bigger and when dining with the family meant the most. A beautiful scene, how the whole family keep singing songs about doctors who prescribe patients nothing but wine. In my world, that is a superlative of the highest degree. 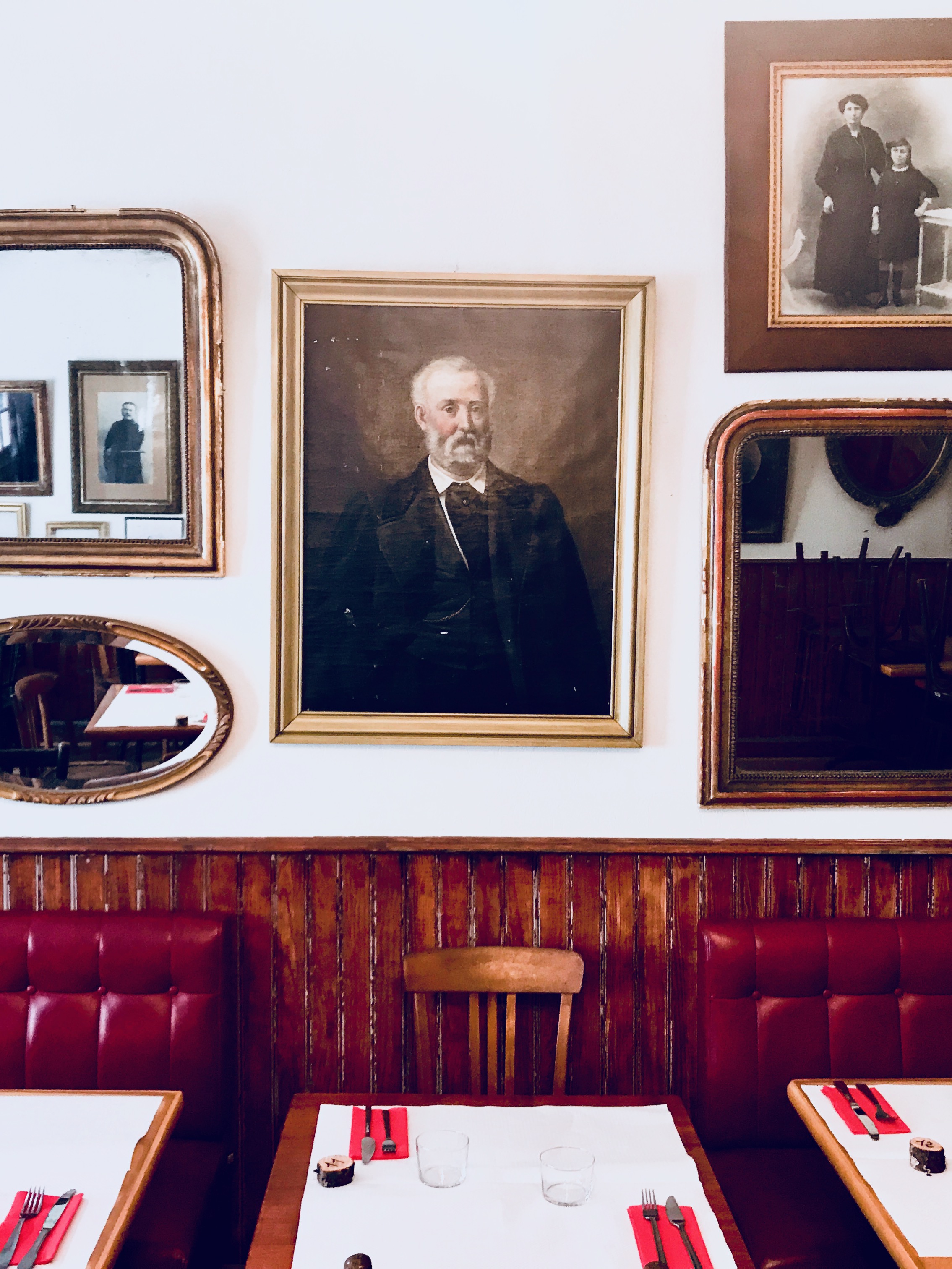