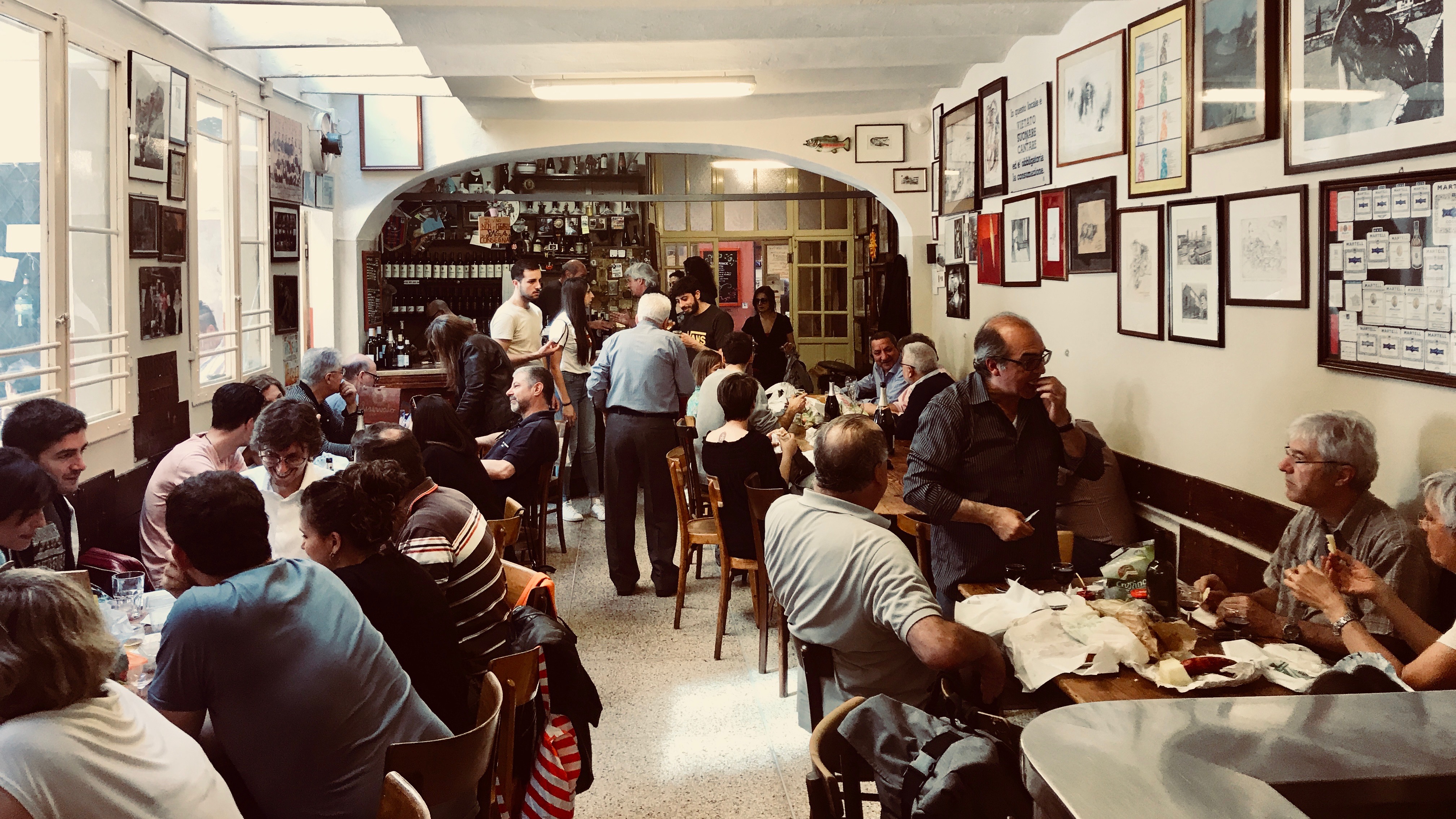 The swinging sixties. Those were the days. Before the devious Cortez met Moctezuma but still long after the black rats sailed into Europe and brought horror, plague and death. It was the decade when the Yorks and the Lancasters brought on each other a family feud of epic proportions of blood but also the decennium when Da Vinci and Boticelli earned their masterly crafts when studying art at the Verrocchio workshop. It was when Ferdinand II married his Isabella from Castille and when Ivan the Great reached the Russian throne. Oh, the swinging sixties. Those were indeed the days.

I am obviously not referring to the sixties of JFK, Sophia Loren and freaking Country Joe McDonald. No, this is a much crueler version. We are way back in the 15th century. Civil rights movements? “Well, I have the uncivil right to chop off your head”. LSD, anyone? “No, thank you. I am getting ridiculously high on God right now.” I got some Monterey tickets to see Jimi Hendrix burn his guitar on stage! “No, I rather burn my neighbour, she is obviously a witch.” And so it goes as we are travelling back to the year of grace in 1465. The year of many random peculiarities as man and woman try to keep up with this erratic world that turns. The year when the world was still perceived as flat. The year when women were wearing chastity belts and animals were being tried and sentenced for crimes as if they were people. And of course; the year when Osteria Del Sole saw daylight for the first time.

People often ask me why I got such a hopped-up and perverse fascination for old bars. Osteria Del Sole may shed light to these reasons. Being what it is - that is a five hundred fifty-three year old bar - Osteria Del Sole is not only a weird and beautiful monument of time but it is also an ideal gateway to the understanding of human experience. This is at least what I believe. Of course, I also read books and occasionally I drag my hungover body inside the confines of various suffocative museums and this is all swell and dandy because there is a lot to be learned about our absurd world through these conventional methods of knowing. But whereas the act of writing is nothing but literal representations of real life and a museum hall is no more than just a cold room filled with sorted artefacts, the old bar has the potential of being something vibrant and untouched. It is still alive. It is still happening. And it is crazy good. It is an exhibition without entrance, all you need to do is to cash up for your beer. And I want that. Just like I want a chaser on the side.

Yet, I can see how the sceptic would feel inclined to question this reasoning as a drunkard’s quasi-cultivated pretext to get liquored up. It is much like a gang of boule players that are obviously only in it for the sun-drenched pastis. Or the self-appointed art critic who are just raiding freebees of wine at gallery openings. I believe that your deviant boss fall under these parameters as well, as he after a couple of drinks too many is groping you from behind at the “team-building” staff party he was so kind to organise. I guess we are all just living a charade, aren't we? But nevertheless, there is knowledge to be learned about this world and my resolute belief is that old bars like Osteria Del Sole is where to attain this. And it is not just a matter of amusing cocktail-trivia as in where Hemingway used to kick back with a Daiquiri or which jewish deli Meg Ryan faked an orgasm. There is more to it, believe me. Just head to this Bolognese institution and dig deep. It is really a keyhole to knowledge.

Just start out with the name; Osteria Del Sole. You don’t need to be Ferdinand de Saussure to know that this place is named after our eternal source of energy, i.e. the sun. But take a moment and reflect on what the word osteria really means. For many of us, the osteria is something we refer to when we with our alarming tans and ridiculously romantic hearts are telling tales about how close to simple peasantry our latest gastronomic voyage to Italy was. Still, the original idea of what makes an osteria to what it really is has nothing to do with rustic slabs of pasta or being ideal platforms for cute marriage proposals. An osteria was from the beginning a place where someone would host you (oste means just host) and where weary vagabonds, merchants, craftsmen etc. could find a place to crash when travelling around the towns and cities of renaissance Italy. It was much like an Italian version of a tavern or an inn - first and foremost a place to find shelter and perhaps a bottle of wine to forget about one’s troubles. The dispersal of food was generally not the case, just like the Osteria Del Sole of today where there is still no food menu. Now, provided with the historical insights of what these Italian taverns were originally like, an excursion to Osteria Del Sole may not seem as such bad of an idea. Even though the interior has naturally changed with time it is still within these walls that the archetypal osteria took place and from what I can understand and until this day have experienced, there is no osteria in Italy that has resisted the winds of change like this place.

Still there is more. By visiting this bar (and I am confidently referring to this as a bar as it is nothing else), the curious-minded can learn more than just about how the Italian people have publicly dined, drank and interacted with each other throughout history. Osteria Del Sole goes as the historical evidence it really is further than that as it also has the potential of drawing our attention to sociohistorical and economic aspects of Italian Renaissance life. Just regard it in relation to its birthplace, Bologna. There are historical records of how this old university city housed more than one hundred-fifty osterias already in the 13th century. Considering that Bologna was a city of hardly 10,000 citizens at the time this ratio appears as quite staggering and this is primarily because of two factors. First, there is of course the university. By being a center of school and thought, Bologna catered to a dynamic influx of scholars and the osterias became natural meeting points for students and professors as they searched for places where to share ideas and take well-deserved breaks. The ironic fact that Osteria Del Sole is still today a notorious professor’s haunt may seem as reason enough to why someone with an interest in the academic culture of this city could find relevance in visiting this place. But also, as Bologna is located in the central part of the Italian peninsula, it has always been a hub for commerce and transport and this geographical location can help to explain why this city was so rich on taverns and inns during this period. Men of trade of course needed a place to stay. Consequently and most evidently - a world arises through the lens of a bar. And no matter if it is the scholarly culture of the oldest university in Europe or the Italian trade-routes five hundred years ago this is all quite mind-blowing. And I definitely want to blow my mind. Just like I want a chaser on the side.

Drinks? There is of course cold beers in the fridge and a couple of bottles of grappa on the shelves but first and foremost this is a house of wine. And this wine tastes damn good. This is not only because it hails from some of the best wine regions in the world but first and foremost because it is being drank inside a microcosmos of camaraderie, excitement and joy. Feel the fermented berries as they hit your craving lips while listening to the convivial chatter of friends and families as they meet up to celebrate life. Open your eyes and discover a room packed with people of today and those who are forever with us through the photographs on the white bleak walls. Embrace this sensation as it deepens your thirsty throat. From the 1€ house-wine on glass to the bottle of Super Tuscan that is eventually downed with no regret, that’s wine-porn in my world.

Munch? I mentioned that there is no such thing as food at Osteria Del Sole. This is not entirely accurate. There is in fact a whole lot of food being consumed within these walls. Behold the most cultivated BYO worldwide. Custom has it that people bring with them their own goodies and during lunch-time you can see tables filled with bread, mortadella and cheese that have been purchased at the nearby food shops. It is a beautiful sight and it is hard not to melt when watching a family as they even cut a birthday cake between each other. 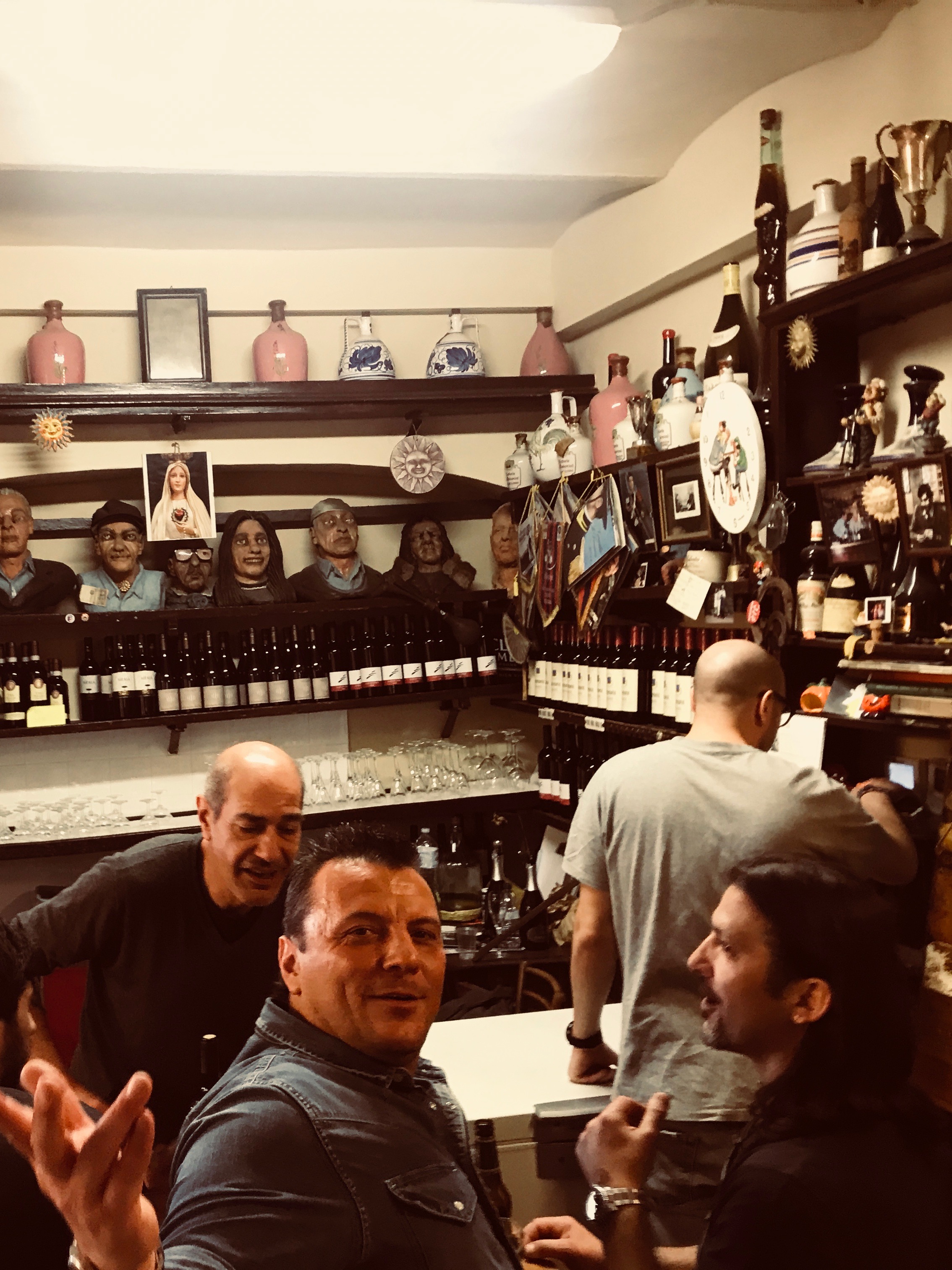