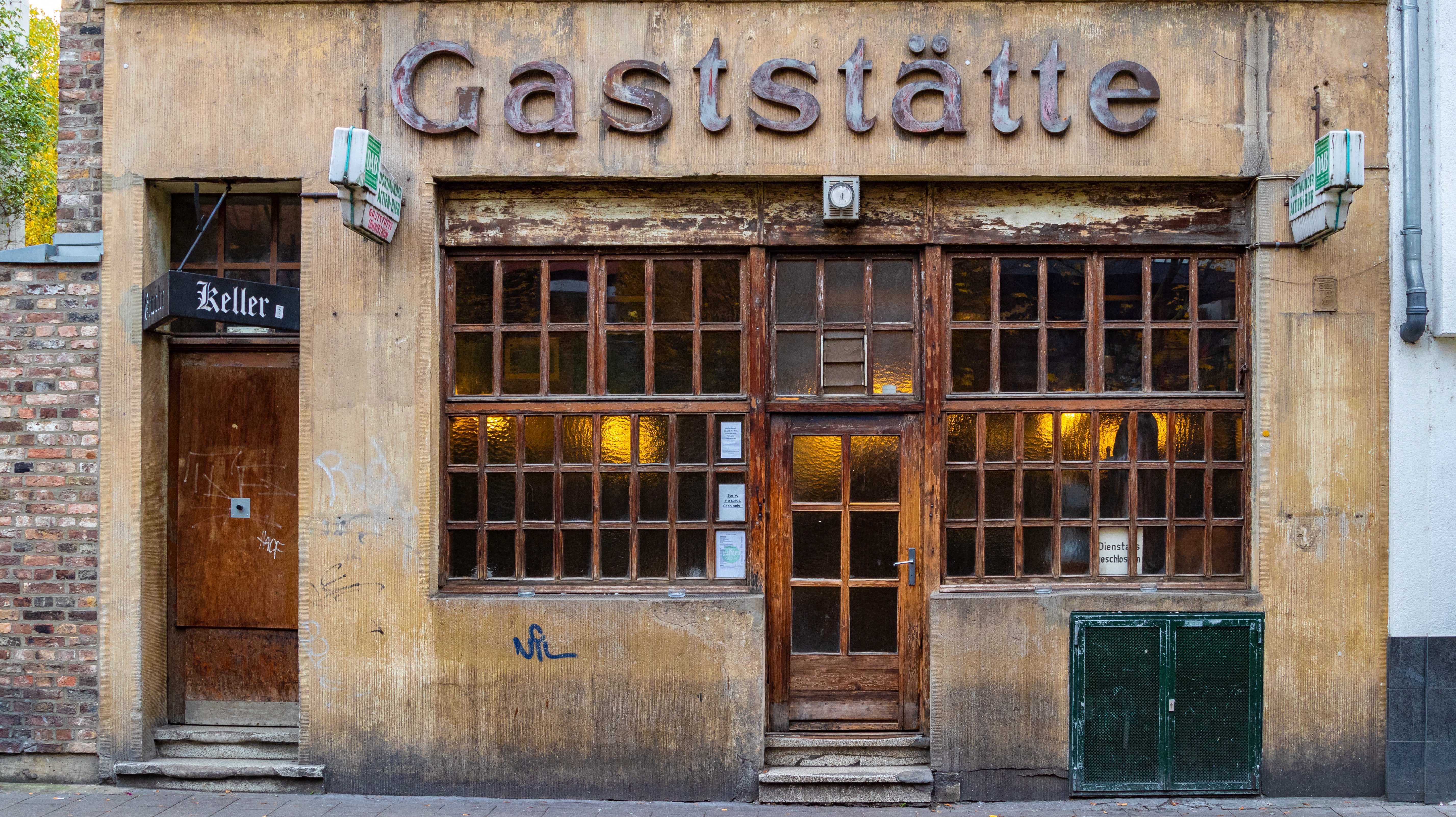 This bit could have deep-dived into the lives of mythical restaurateur duo Mr and Mrs Lommerzeim who founded and ran an even more mythical German pub from 1956 all the way into the second millennia. She behind the tap and him swirling around happy punters pushing beer and traditional West-German fare.

This article could also have dealt with the rich culture behind a cold kölsch, a terrific 200-millilitre beer serving so typical of both this old gaststätte and the city of Cologne. It is quite a spectacle to observe, the ingrained purveying and consumption of this local pride as respected servers under the title köbes, are in a constant quest of replacing empty beer glasses with new filled ones. It is a social contract that is fairly simple. The köbe will return with his charismatic kranz, a circular tray resembling a crown, swapping your old kölsch for a new and will then write up your round on your beer coaster. When you are done for the night you will simply put this original bookkeeping on top of your beer glass and then the köbe will know that it is time to finish the bill. It is a sophisticated way of enjoying a classic beer but no matter how swept away a bar buff might by this endearing routine, it doesn’t qualify as the main topic of this bar. Neither does the amazing fact the Mr Lommerzheim once declined Bill Clinton a visit since the security around the presidential presence would imply closing down the bar for normal regulars. And that canonised special of the house; the succulent pork chop that draws craving carnivores from all around the world? It definitely deserves a mentioning and perhaps even the Nobel Peace Price, but being the centrepiece of this text it simply cannot be.

Let us instead focus on exteriors and what they do to a bar and this world. For many, an exterior may just symbolise the last physical hindrance between one’s own sober ennui and a well-deserved drink and although this is exactly what it is, it is also so much more. A mysterious borderland between in and out, right or wrong and night and day, the exterior makes a fascinating passage of urban life. It is at this cultural bridge where chaste becomes slutty and where dull transforms to inspiringly free but also where dreams and families get shattered by the shortcomings of those who really should not pass. All of these scenarios being promised by persuasive logos and persevering neon lights. Furthermore, it is also this exterior that brings the bar outside its given existence as just a bar and which couples it with the outside architectural world. One needs in fact to be nothing more than a teetotaling pedestrian but still cherish the local bar because of the value that its exterior gives to the surrounding urban landscape, a notion just as paradoxical as it is logically true.

So what makes an ideal bar exterior then? Nearly impossible to say as it can vary in endless ways. It could be a majestic freestanding pub exterior, much like The Palm Tree in London’s Mile End or like the Manchester postcard candidate Peveril of the Peak. But it could also be just a subtle street detail like the Rum Trader logo next to a futuristic yellow door in West Berlin. Or something so unassuming like the backdoor entrance of LA tiki bar Tonga Hut where palm tree decorations hang over big black garbage cans. Historic azulejo patterns around a classic tapas bar entrance in Seville? They all do the trick. Where they differ in shape and expression, they unite in the way they speak to us and how they interact with the streets.

And unless you are a weird guy reading everything backwards then you have already seen the exterior of Lommerzheim. It is on the dramatic photo at the top. A building that I feel encouraged to emphasise as a human masterpiece, perhaps only outshined by the Pyramids or the famous dome of Cologne. A drastic absurdity to put in print? Honestly, yes. This tumbledown building was never put in this world with the ambition of pleasing the gods or to manifest any type of power and wealth. It is simply a simple house of simple qualities. But it has remained untouched, unlike many of the other buildings on this side of the Rhine. A pure expression some might say. And as one fixates on its details, there is really a stirring world where to get lost. The seemingly endless variations of the colour brown. A splendid steel sign indicating nothing more than that here lies a restaurant. A graffito telling us that “Nil” was once passing by. That green locker at the right. In colour, it perfectly matches the Dortmunder beer lamps which no one really knows why they are there. And those cracked stairs. I wonder what type of world without cracked stairs? And of course, the heart of it all; the church-like windows in wooden frames. In a majestic manner they lure you into a warm place which in this city of many great bars is amicably known as ‘Lommi'; the most kölcheste of all pubs in Cologne. 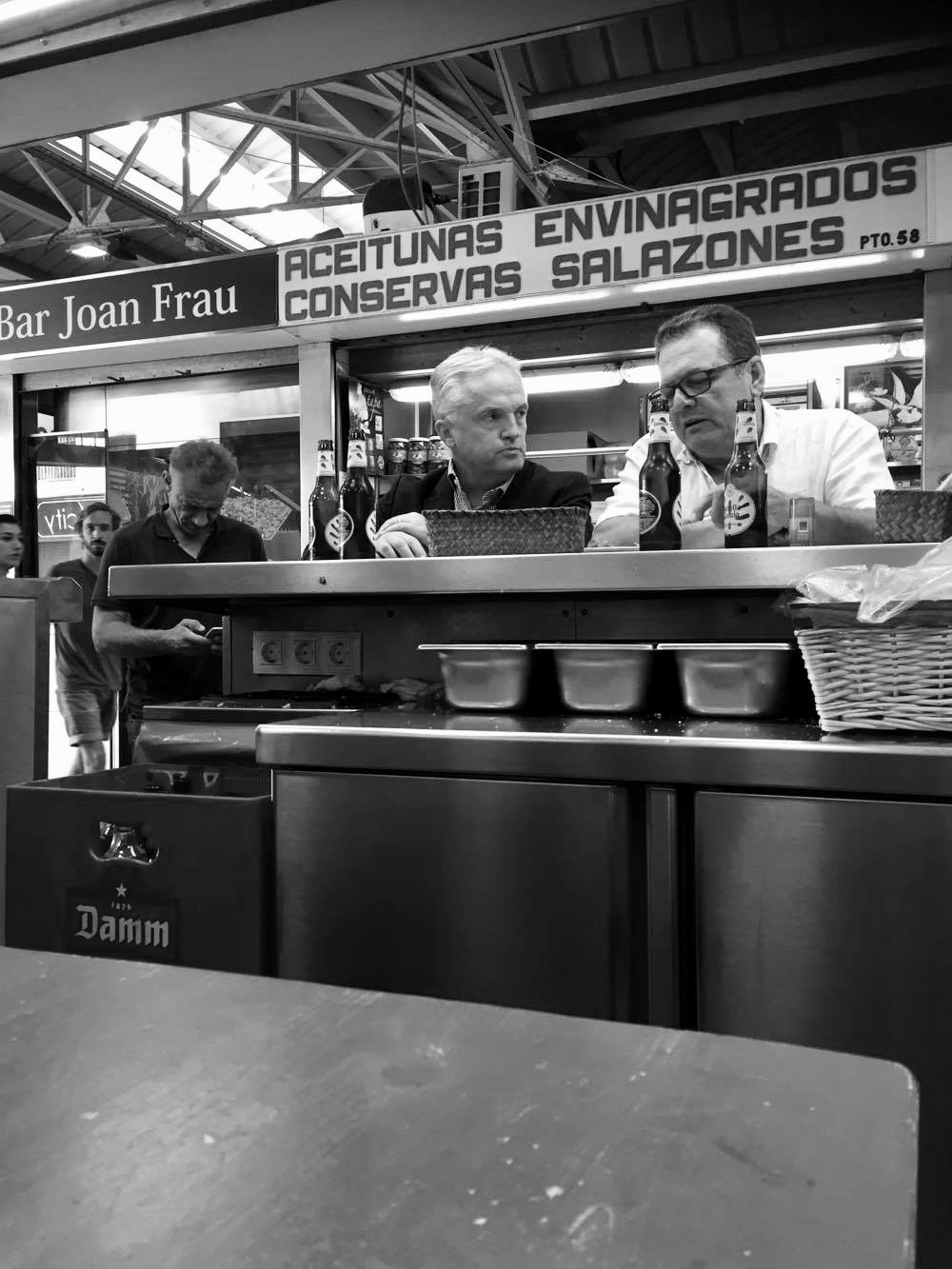