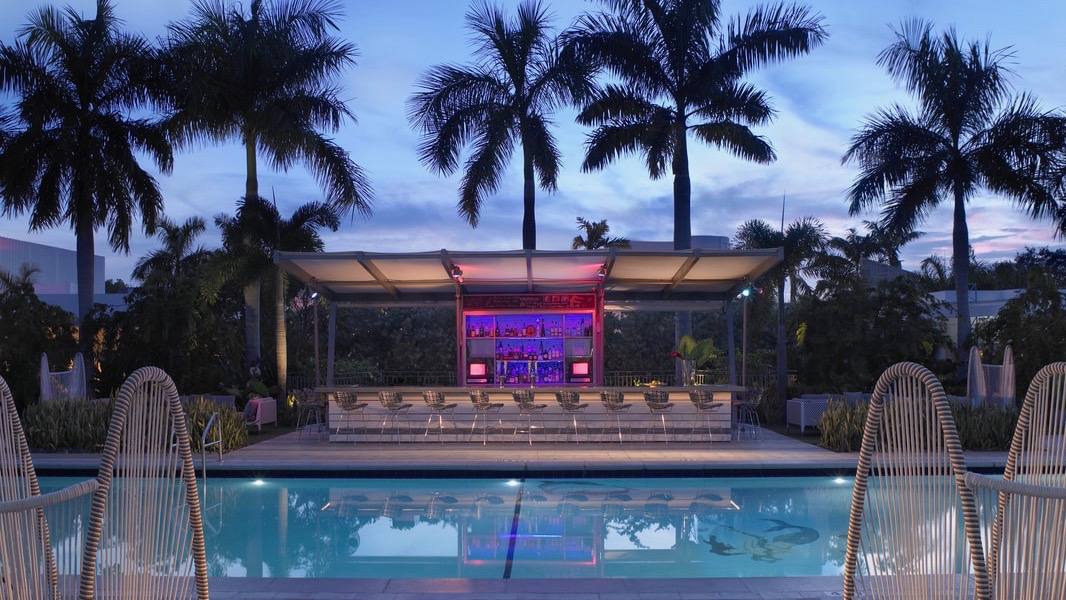 It’s on Biscayne Boulevard. Just the street name makes me want to visit. So does the fact that this bar is located at the pool side of an old forgotten motel that was closed down for years but is now being celebrated for what it deserves to be acknowledged as; a piece of great architecture.

This whole city should get more recognition in this matter. This I firmly believe as I look at the compassionate faces in front of me when I tell them about the week of vacation me and my family took here a month ago. I can sense their feelings of pity that is so characteristic of the inflated and high-flown European attitude towards our grotesque cousin on the other side of the Atlantic. “Look at that poor guy, having finally surrendered to the temptations of sunshine, vainglorious comfort and plastic overkill. What aesthetic and moral ideals didn't he had to forsake just for a couple of days of sipping Piña Coladas down by the poolside?”

On the contrary, I found a city that I came to like in Miami. A city that I felt was relevant and engaging. Despite all of its flaws, or should I say in much thanks to these flaws, Miami spoke in a moving language and this captured my interest. It is as if there is a deep melancholy aching somewhere under that ever gazing Florida sun, a vulnerable and lonesome inner that is ready to capitulate for whoever willing to look further than the usual tricks of this city. It is the confession of a faded glory, that’s what it is. A rude testimony of the palmy days that has already passed by. Left is nothing more than a nostalgia of broken dreams and nowhere in Miami can this wistful sense of being become more detectable than in this city’s neglected architecture.

To be noted is that I’m not referring to those beautiful Tropical Deco hotels down in dull South Beach. Neither the majestic examples of the irresistible vanity that is to be found in those villas of Mediterranean Revival. No matter how much this could have been the case, this piece is not about the Miami of Versace or the neon lights of Miami Vice. Instead I am bringing you further up-town, closer to the mundane. Some would probably call it ugly, some would probably not care at all. I would call it pretty fucking exciting. In the Upper Eastside there is a world full of old, formerly forgotten fifties-motels that are just waiting for a piece of affection. They go by such epic names such as the Shalimar, the New Yorker, Sinbad Motel, the South Pacific. And then of course, Biscayne Boulevard’s crown jewel; the Vagabond Motel.

It is much a backyard story of Miami that has taken place in this building. Local lore has had it that Frank Sinatra used to hold court at the Vagabond during the fifties but this was however not the glorious case. When in Miami, the Rat Pack did spend a lot of nights at the Vagabond’s Club but that was another place located downtown which has later been confused with this motel. Instead, the cheap inns at these blocks were mainly catering to vacationing mid-class families that along the postwar “automobile boom” began to flock the highways down to southern Florida. The affordable motels around Biscayne Boulevard were thus the perfect places to stop as they were close enough to the tantalising dream of the Miami Beach glamour but still kind and gentle to the common man’s wallet.

While sitting at the poolside bar at the Vagabond, it is easy to get carried away by this golden age of the fifties. It is almost as one can hear the laughter of baby boomers playing around the poolside while their daiquiri-drinking parents are listening to the latest news about the Castro take-over on their transistor radios. If listening really careful one could probably also hear a television being turned on from Hyman Roth’s room as he is spending his last days by eating a tuna sandwich in front of a football game. That’s how cinematic this country gets from time time. But to believe that the Vagabond is a direct descendant of those heydays would be mistaking as well. During the seventies and the eighties, this microcosmos of motels fell into great despair and became infamous for being the scene of heavy drugs, hookers and rooms by the hour. The Vagabond did even close down for several years until an entrepreneur named Avra Jain decided to revamp the rundown building in 2013. What you see today is thus a renovated and brushed up version of the original motel, even though a responsible and well-thought one. Gone is the M being replaced by an H, signalising the boutique ideals of our time and the pleasant crisp white and cerulean blue paint job on the walls is far from the beige original. Neither does my main reason for coming here - the casual and groovy cabana bar - find any room on the old photos of the motel.

When thinking about it: the resurrected Vagabond is nothing like the original. What was once a modest and functional compromise has today become a temple of retro romanticising and ironic play on lifestyle and design. Neither is it anymore much of a bygone underdog. The millions of dollars that has been invested into this project has seen to that. So has all the media attention that has followed this investment. Further on, to say that the Vagabond is unique in the way that it embraces its origins would also be an exaggeration. The buzzing fad term MiMo on BiBo (Miami Modern on Biscayne Boulevard) tells the story of the awakening of a whole neighbourhood but also of a city in change. This part of town is now on the up and it is so because of a revaluation of the Miami style of modernist architecture that is being heavily represented up here.

But still, and this is STILL written in capital letters, The Vagabond has somehow managed to found its way back home again. So has Biscayne Boulevard in general. The postwar optimism that fuelled this diesel-driven world in the fifties is once again back but disguised in another time. So is the appreciation of this type of architecture. What was once mocked as inhumane and tasteless is in the retrospect of nostalgia becoming something warm and beautiful. This is perhaps nothing of a surprise as the characteristics of Miami Modern are to be seen by its utopian and futuristic dimensions. No matter one’s aesthetic preferences, this carries a lot of depth. Nostalgia itself has also a utopian element, only it is directed towards the past instead of the future. I guess it is in this bittersweet marriage that Miami prevails. It is the dream about the past.

Drinks? The cocktail menu at the poolside bar is a comfy voyage without any raving surprises. This is necessarily not a bad thing as this bar could easily have been a mixologist’s nerdery where too much attention would have been directed to obscure tonic brands and different shapes of ice. Sometimes a semi-legit Tommy’s Margarita is all you need to cherish the real highlights of a bar.

Photo attribution: Photo 1, 3 and 5 are credited to Troy Campbell. 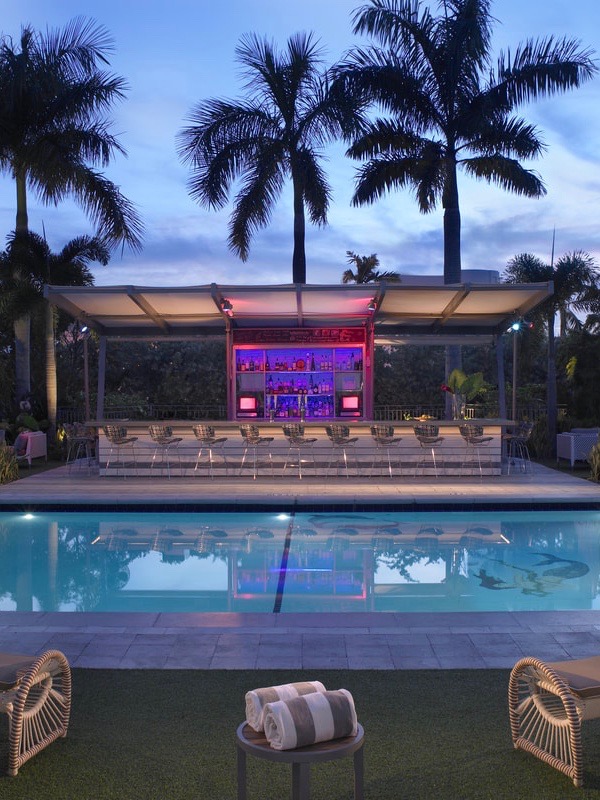