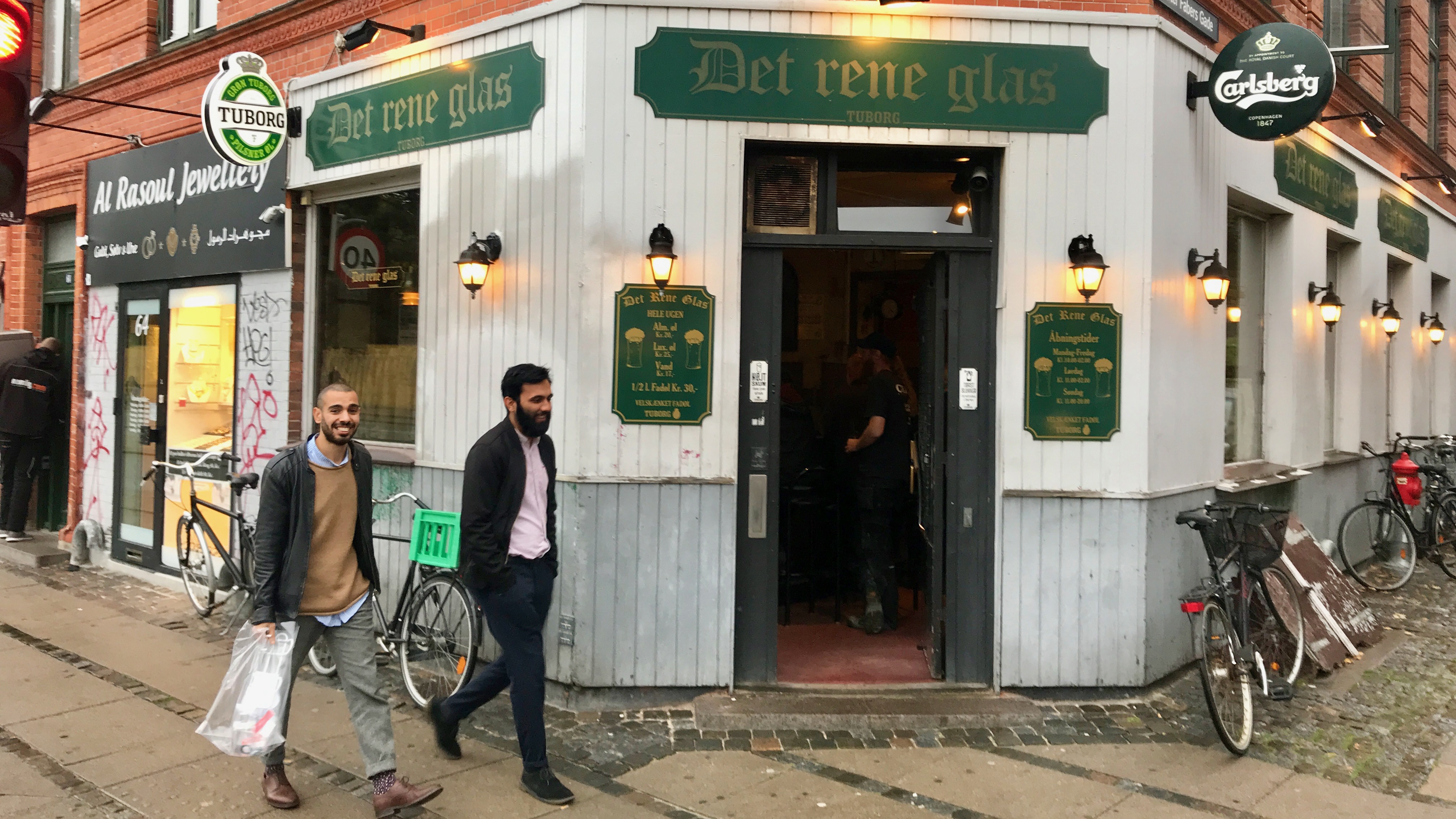 For the last two years I have been coming here a lot. It is a magnificent bar. Combined with the dauntless traffic that is penetrating Copenhagen's northern inlet Nørrebrogade, the cute and warm piece of fellowship inside Det Rene Glas is a natural example of the harmony that makes this city and the bars inside it so special; the symbiosis of urban grandiose and provincial modesty.

Outside, massive and almost unforgiving apartment houses is roaring reminiscently of the rapidly emergent working class that found its way here after the city decided to abandon the old demarcation line in 1852 and expand it to what is today called Nørrebro. The biggest of all Copenhagen's city districts, Nørrebronx - as it is also popularly called - is clearly where Copenhagen grows cosmopolitan big and these days also globally relevant. A concoction of ethnic pluralism, hipster restaurants and gang shootings it is at these streets where the capital of Denmark gets its fair share of big-city thrill, for good and for worse.

And it is in this contrast that Det Rene Glas becomes so special. According to local sources this was a place where the disposal of alcohol lured peasants long before the current building that houses the bar was even built. Even before there was a real street outside. The origins of Det Rene Glas has with these indications an even longer history than the neighbourhood itself - giving the bar of today a very special spirit, a mystic aura of its own. It is the Denmark of yesterday - a relic from an agrarian and detached place and time - still here after more than a century of change and still tenaciously holding on to whatever once was.

It is within this context I embrace this bar. The distinct oral tradition of remembering and reproducing a local story. Behind every brown wallpaper there is a tale to be told, most notably the one about the name. The Clean Glass, as it would be translated into English, originates quite logically from the fact that this bar once took pride in serving glasses that were cleaned between every customer, a rarity of the time. And at Det Rene Glas even the schnapps glasses were washed, although common knowledge said that liquor was disinfectant. Imagine an etymology this powerful as it not only reveals a curiosity to remember but also invites to reflect about a time when a simple move really mattered. When a clean glass was gold. I know I do.

And then there is of course this simple notion of democracy, the great maxim of our time. Det Rene Glas doesn't judge anyone. As long-time and charismatic owner Poul Egon has once stated, there is no difference between people and people at Det Rene Glas. Everyone are welcome here, bums as venture capitalists. And irrespective of how nauseatingly cute this constant yearning of and nagging about a warm, including place of social equality may get after being proclaimed one too many times at this blog, it is still nothing but the truth when discussing this bar. When discussing Danish bodega culture in general, actually. And it is not a notion of abstract nature either because it all comes down to money. The law of the buck. Cash, capital, cheddar.

The Danish bodega is generally considerate and respectful towards the condition of the average joe's wallet. A most likeable trait, I must say. In fact - it is actually the third out of ten arguments that I assert in a serie of claiming Copenhagen as the "dive bar capital in the world". We have already dealt with the debated privilege to smoke indoors when we examined the beautiful Eiffel Bar in Christianshavn and when I wrote about the charming bar Funch's Vinstue close to Nørreport Station I emphasised the special opening hours of Danish bodegas. Now the favourable matter of getting drunk without the questionable consequence of getting robbed. I'm kind of big on this; I can't see why the good life has to be expensive. But do not get me wrong, I am neither cheap or opportunistic. I just feel that the pricing of alcoholic beverages often tend to ridicule the actual product being placed on the counter. And what's bizarre about it all is that you often tend to pay the most for the worst. A flat pint of lager at TGI Fridays does not only taste like rancid piss of owl because the badly maintained pipes that flushes this industrial liquid ten meters underground are poorly maintained, it is also brought to you by an institutionalised victim humiliatingly dressed in some sort of "red-and-white striped leprechaun's costume", only smiling at me because they know I am drinking the saliva that they secretly spat in my glass when I was in the bathroom. A rude and preconceived imagination maybe and a disheartening scenario in how to spend my son's child benefit but hey; we are only humans in a very inhumane context.

I don't mean to fall too much out of context here but I do find it interesting as how friendly, inviting and genuine bar experiences can be strongly related to a contradictory low price setting but often not the other way around. Most speculatively it may have something to do with the low margins of profit that reigns at these places, creating other motives to make business and welcome customers. I don't know really. All I know is that a cheap beer tastes better and that the Danish bodega is the place for that. Kind of surprising actually, as Copenhagen is frequently ranked as an expensive city to drink in (its beer index is unexpectedly even higher than ruinous Stockholm). Therefore it is important to point out the unique essence of the bodega itself and not just see it as a part of the Danish context. Or better said, it is crucial to stress how the bodegas of Copenhagen is actually challenging and exerting their influence on the city around them. In horror, one can only ponder how this city would be if (or more pessimistically when) the bodegas seize to exist. Left would only be a tedious paradise for the creative and affluent class, who by their "in-crowd habitus" would find and share homogenous spaces of interaction while spending their designer salaries on ninety kronor bottles of beer, of course brewed by the local semi-god Mikeller. And of course, there will always be the mandatory downtown locations of TGI Fridays.

There is a scene from Det Rene Glas that I cannot stop thinking about. One year ago me and a close friend started out a Saturday night here and as we had a couple of rounds of beer and Gammeldansk we observed a woman sitting next to us playing on a slot machine. She had a timeworn face and her hair was a tangled mess. Beneath her chair she had put a plastic bag of a suspicious amount of belongings where especially two big bottles of cheap vodka were drawing our attention. As she stared apathetically into the machine she held a small bag of coins which she was feeding into it in a robotic way. It was a kind of tragic sight it all, on the verge to surreal as Bobby McFerrin's old eighties-hit Don't Worry, Be Happy was playing through the speakers.

I do not mean to exploit her exposed life situation just to accentuate how real and hard-knock this dive is but I can't still hide my fascination about how her miserable presence actually tells the story of something good and decent. It is the powerful quality of acceptance. Many places would never let her in at the first run and many people would probably respond to her presence with an uncomfortable aversion. But not at the bodega, not at Det Rene Glas. Here we all stand equally naked in front of a stripped down reality, in many ways leaning towards a sort of classless state of imagination. And how unsexy it might sound this is in many ways because we can all afford it, we all posses the financial capital to be here. It is the law of the buck. Cash, capital, cheddar.

Drinks? Of course cheap beer and liquor. Between 10.00-17.00 a bottle of beer costs ten Danish kronor, after that it is reasonably priced at fifteen.

Munch? I would never believe and neither have I ever seen it but Poul Egon has apparently a toast on the menu. Luckily for all of us, the best kebabs of Copenhagen are flocking Nørrebrogade further south on the street.